[Posted: 9:30 AM EDT] Happy Monday!  It’s going to be a busy week.  The Federal Reserve meets this week.  The president is having his historic meeting with Kim Jong-un.  On Friday, we are expecting details on the steel and aluminum tariffs.  Here is what’s happening today:

Kim and Trump in Singapore: Early comments from SOS Pompeo were very positive.  We don’t expect a substantive deal to emerge from this first meeting but we would look for this summit to kick off a series of negotiations.  As we have noted before, the U.S. is moving down a path to reduce America’s global obligations (see G-7 to follow), so if President Trump can ensure the U.S. won’t be attacked in return for easing sanctions then a deal is likely.  Both Japan[1] and China[2] are concerned they are going to be left on their own.  The Koreas have a longstanding desire to become independent from all outside powers.  Kim is likely using the summit to increase his power at home.[3]  The outside powers would prefer to have some degree of influence, if not domination, over the peninsula.  So, there are lots of conflicting narratives among North Korea, the U.S. and surrounding powers.  Our expectation is that the talks will be friendly, there will be more talks to come and the region will become increasingly nervous.

The G-7: As we expected, the meeting was difficult.[4]  Although initially agreeing to it, President Trump decided not to sign the communiqué following Canadian President Trudeau’s criticism of the American president.  Ultimately, as we noted last week, the U.S. has been moving to change the way it exercises hegemony, perhaps on the way to giving it up all together.  The other six nations in the G-7 have become accustomed to how the U.S. has managed the world since WWII and would prefer to maintain the status quo.

The chart below shows how the Eurozone and Germany have become net current account surplus areas, essentially absorbing demand from abroad (read: U.S.).  Prior to the creation of the Eurozone, Germany was less able to expand its currency account surplus because the D-mark would appreciate, reducing its export competitiveness.  The creation of the Eurozone effectively reduced the exchange rate (the broader currency appreciated less than the D-mark would have done on its own), making Germany an export powerhouse.  As the chart shows, Germany’s current account surplus to GDP is nearly 7%; even more insidious, German-inspired fiscal and monetary rules have forced the Eurozone to adopt German policies, making the entire Eurozone Germany writ large. 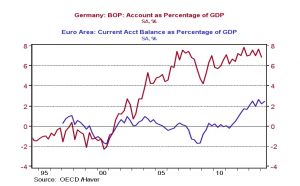 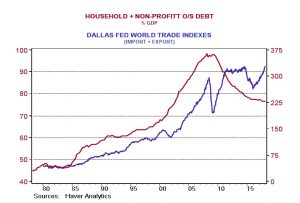 The blue line on the chart shows the Dallas FRB world trade indices (world less U.S.) along with U.S. household (and non-profits) debt to GDP ratio.  Note that to foster global trade growth, the U.S. economy was forced to take on larger levels of debt.  This is because the reserve currency role requires the U.S. to act as global importer of last resort.

Simply put, the role of providing the reserve currency has distorted the U.S. economy.  Although we have serious reservations with President Trump’s continued focus on tariffs as a way of addressing the distortion, the distortion is real and it is partly to blame for American inequality and loss of jobs.

Bloomberg’s Tom Keene recently conducted an interesting interview with Robert Kaplan on the topic of American hegemony.  Kaplan, a prolific writer on foreign affairs, holds views similar to Samuel Huntington.  In the aforementioned podcast,[5] Kaplan argues that the period of the last 70 years has been an anomaly.  The duopoly of power exhibited by the U.S. and U.S.S.R. was unusual in world history and a more regional, contentious “great game” world is more consistent with world history.  We tend to agree.

The Shanghai Cooperation Organization (SCO) meeting: While the G-7 was imploding, the SCO[6] was having an uneventful gathering in Qingdao.  This group includes China, Russia, the “Stans,” India and Pakistan, with numerous observer states, including Iran.  The group agreed to support the WTO and the Iran nuclear deal.  In the long run, we would not expect this group to hold together.  Our view is that China is using the SCO to promote its domination of the Eurasian landmass, a move that will be strongly opposed by both India and Russia.  Of course, Russia will probably be unable to resist China’s encroachment due to its abysmal demographics, but India will be a much more formidable impediment to China’s aims.  Still, the parallels between the G-7 and the SCO paint the world democracies in an unfavorable light.

Iraq election turmoil: A fire destroyed a warehouse containing ballots from recent elections.[7]  The ballots were being held to facilitate a full manual recount in an election plagued by voter fraud allegations.[8]  It is unclear how the Iraqi government will handle this development.  A new vote is possible, although Moqtada al-Sadr, the highest vote winner, will surely protest another election.  We note that oil prices are lower this morning due to reports of rising Russian output; however, the oil markets do have to take rising geopolitical risk into account and this news from Iraq is simply more evidence of stress.

Bitcoin tumbles: Reports that a South Korean cryptocurrency exchange was hacked[9] pushed bitcoin lower overnight.  As the chart below shows, bitcoin remains well off its highs.  The hacking news can be seen at the far right-hand of the chart.

Turkish elections:Turkey will hold elections on June 24.  Although polls show that President Erdogan holds a 13-point lead over his closest challenger, election rules require a majority.  If the polls are correct, a run-off will be necessary.  This is a critical election because the winner will inherit a new centralized presidency, giving the new president unprecedented powers.  Meanwhile, the opposition appears unusually united in the goal of denying Erdogan power.[10]  Although we expect Erdogan to eventually prevail, it isn’t a certainty.  If Erdogan loses, we could see a “knee-jerk” rally in the lira and Turkish equities.