[Posted: 9:30 AM EDT] There were a couple of political items of note.  First, the White House announced the president will hold a Rose Garden gathering to announce his decision on the Paris Climate Accord.  Reports suggest he will take the U.S. out of the agreement, although there are conflicting news items indicating he hasn’t completely made up his mind quite yet.  Although there is much concern in the media about the action, we view it as mostly symbolic.  First, these major accords rarely meet their promises.  The ones that do are narrowly structured; for instance, the Montreal Protocol on CFCs worked because it was a specific gas and substitutes were available.  The Paris Climate Accord is much more general, thus we always expected widespread failure in reaching the stated goals.  Second, it seems to us that the private sector is already moving on this issue of reducing carbon emissions and government action may not matter all that much.  Insurers’ decisions to not cover risks affected by climate and firms needing to make long-term investment decisions that might be affected by a post-Trump reversal of environmental rules are not going to change based on what the president says later today.  In other words, a utility looking at a 30-year investment in generating capacity will probably still lean toward natural gas instead of coal, not knowing how regulation may change in the future.  Third, natural market forces lowering the costs of alternatives may make leaving the accord moot.

And, lest we forget, President Trump is mercurial; he may decide to stay in the accord.  We are expecting to hear from the White House at 3:00 EDT.  If the announcement is delayed, it may indicate how torn the president is over this decision.

PM May decided to skip a live debate yesterday evening, continuing a pattern where she is refusing to directly engage the other candidates.  Instead, she sent Home Secretary Rudd to represent her.  This was probably a bad move.  The lesser parties severely criticized the PM while Labour Party Leader Corbyn scored points by staying measured and avoiding direct attacks on May.  Polls continue to tighten, with the Tories’ lead falling to a mere 3%.  We are in the area of the margin of error; if the Conservatives lose, it will be bearish for the GBP and other U.K. financial assets.

One of the issues we are monitoring is the debt ceiling.  The debt ceiling is the limit on national debt that can be issued by the Treasury.  As a refresher, the debt ceiling was first created in 1917 during WWI.  Prior to the Second Liberty Bond Act of 1917, Congress had to approve the debt every time the government borrowed money for a specific appropriation.  War borrowing made this practice impractical so the new law set a limit on debt the Treasury could issue and Congress must lift the limit in order to issue more debt once the initial limit is reached.  It should be noted that the appropriations and budget are separate from the debt ceiling issue.  In effect, the debt issued is to fund government appropriations that have already occurred.

After a couple of incidents when the debt ceiling was reached, Congress passed the “Gephardt Rule,” which said that the debt ceiling would be automatically raised when a budget was passed.  This rule was repealed in 1995; since then, we have had periodic debt limit crises that have led to government shutdowns.  The first occurred in 1995-96.  The most famous incident occurred in the summer of 2011 which resulted in a downgrade of U.S. Treasury debt by S&P.  The sequester process emerged from this event.  Another shutdown occurred in 2013.  We have been currently working under a suspended debt ceiling that expired in March.

It initially appeared that the debt ceiling would become an issue in Q4, but the Trump administration has indicated that the Treasury will reach the current limit by August. 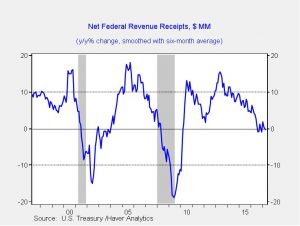 This chart shows the yearly change in net Federal receipts, smoothed with a six-month moving average.  Falling receipts is a concern; the past two recessions coincided with a sharp decline in revenue likely caused by falling incomes and profits.  The current problem is partially due to some taxpayers delaying asset sales in hopes of lower capital gains rates in the future.[1]

The GOP membership appears divided on the debt ceiling issue.  The Freedom Caucus is hinting that it may call for spending cuts to approve a rise in the debt limit.  Other members of the GOP, including the treasury secretary, are pressing for a “clean” rise in the debt limit.  The GOP leadership may be forced to woo Democrat Party votes in order to avoid default, but it is unknown what demands they will make on the White House and the establishment GOP for their votes.  We would not be surprised to see demands related to health care, for example.

Given the disarray within the Republican Party in Congress, we are worried that threats of default and a government shutdown are rising.  At best, this issue will begin to distract the administration and Congress from other pressing issues, such as health care, tax reform, etc.  At worst, we could face another government shutdown and the threat of another downgrade.  We will continue to monitor this issue as the summer unfolds.

The FT is reporting that EU officials are looking into a process where sovereign debt across the Eurozone would be “bundled” into a new financial instrument and sold to investors.  Although officials in Brussels have been careful not to characterize this new instrument as a Eurobond, it could be an intermediate step toward the creation of such an instrument.  In theory, German, Italian, Spanish and other nation bonds would be bundled into an instrument; this process could modestly raise German borrowing costs but lower costs elsewhere.  We would look for Germany to oppose the measure but France and the southern tier nations to actively support the idea.