Our Comment today opens with an update on the Russia-Ukraine war.  New sanctions are being discussed by Western leaders.  We next review other international and U.S. developments with the potential to affect the financial markets today, including multiple items relating to China.  We wrap up with the latest news on the coronavirus pandemic.

Note:  Because COVID-19 has become more endemic and in most countries isn’t disrupting the economy or politics as much as it did previously, we will drop our dedicated COVID-19 section beginning July 1.  We will continue to cover pandemic news as needed within our main text.

Russia-Ukraine:  As Russian forces continue to make slow, plodding progress in seizing territory in Ukraine’s eastern Donbas region, Ukrainian forces continue their increasingly successful counterattacks in southern Ukraine around the port city of Kherson.  Both countries face worsening shortages of personnel and equipment, and Russian President Putin continues to implement a “cover mobilization” to raise more troops.  According to reports, the Russian State Duma will consider a bill that would allow military officials to offer contracts to young men immediately upon “coming of age” or graduating high school.  It circumvents the need for conscripts to complete military service before being sent to fight in the war. On the Ukrainian side, Western leaders will discuss providing further, “sustained” military aid to the country at their summits this week. 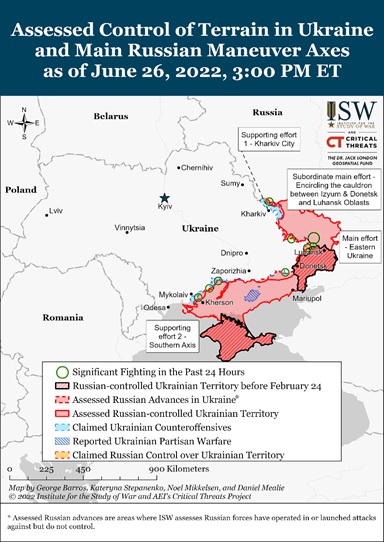 G7 Summit:  Besides the ban on Russian gold imports mentioned above, the G7 leaders announced a new “Partnership for Global Infrastructure and Investment” program that will jointly provide $600 billion for infrastructure investments in less-developed countries by 2025 to counter China’s Belt and Road Initiative.  Relying on both public and private funds, the program will finance investments in projects such as climate resilience, secure information and communications technology, gender equity, and modernizing health systems, including vaccine manufacturing facilities.

Global Monetary Policy:  In its annual report, the Bank for International Settlements warned that global central banks must raise interest rates sharply, even if it significantly hurts growth.  Otherwise, the “central banks’ central bank” said the world risks a 1970s-style inflationary spiral.  While central banks like the Federal Reserve are clearly behind the curve in fighting inflation, the BIS warning could help push the policymakers into tightening monetary policy so quickly that they produce a recession, most likely sometime in 2023.

Chinese Economy:  New reports indicate small and medium-sized businesses throughout China are drastically cutting their hiring plans in response to the country’s draconian pandemic lockdowns, rising costs, and waning orders from overseas.  Some firms have even been cutting wage rates and laying off workers.

Chinese Politics:  Ahead of the Chinese Communist Party’s 20th National Congress this fall, where President Xi will try to win a groundbreaking third term in power, at least nine provincial party chiefs have published fawning articles extolling the president and pledging loyalty to him.  The articles have even used over-the-top reverential terms for Xi that have rarely been used since Mao’s cult of personality decades ago.

Japan:  Amid a blistering heat wave, the government today called on businesses and the public in the Tokyo area to cut electricity use, saying a lack of generating capacity risked plunging the capital into a power blackout.  If prolonged, any resulting power outages could be a headwind for Japanese economic growth.

China-United States-Japan, et al.:  Alarmed by China’s effort to court the island nations of the western Pacific Ocean, the U.S. and several key allies have launched a new initiative to bolster and coordinate their engagement with those nations.  The “Partners in the Blue Pacific” initiative encompasses the U.S., Japan, Britain, Australia, and New Zealand and is designed to blunt Chinese overtures to nations in the region, such as the new pact potentially allowing China to send military forces to the Solomon Islands.

United States-Israel-Saudi Arabia-Egypt-Iran:  New reporting shows top military officials from the U.S., Israel, Saudi Arabia, Egypt, and other Middle Eastern states met in March to discuss how they could defend against Iran’s growing missile and drone threats.  As the U.S. seeks to step back from its role as the guarantor of Middle Eastern security to focus on threats from China and Russia, the report suggests it is seeking to install Israel in its place, at least in terms of air defense.

U.S. Housing Market:  Reflecting the difficulty in buying a house amid today’s hot home market and rising interest rates, people trying to rent are now getting into bidding wars.  That could help push up rental housing costs in the consumer price index and worsen or prolong today’s high inflation rate.

U.S. Regulatory Policy:  While Friday’s Supreme Court decision voiding Roe v. Wade and its recognition of a constitutional right to abortion continue to generate intense debate, we suspect it won’t have any immediate, broad impact on the economy or financial markets (our key focus).  However, it probably puts particular companies at risk of legal or political blowback, depending in large part on their public statements regarding the issue and their healthcare benefit policies.

COVID-19:  Official data show confirmed cases have risen to  543,646,378 worldwide, with 6,329,214 deaths.  The countries currently reporting the highest rates of new infections include the U.S., Taiwan, Germany, and Brazil.  (For an interactive chart that allows you to compare cases and deaths among countries, scaled by population, click here.)  In the U.S., confirmed cases have risen to 86,967,639, with 1,015,938 deaths.  In data on the U.S. vaccination program, the number of people considered fully vaccinated now totals 222,123,223, equal to 66.9% of the total population.