Our Comment today opens with an update on the Russia-Ukraine war, where Russian forces continue their creeping seizures of territory in eastern Ukraine, and President Putin keeps trying to undermine Western support for Kyiv by cutting off energy exports to Europe.  We next review other international and U.S. developments with the potential to affect the financial markets today, with a particular focus on leftist political victories and labor unrest.  We wrap up with the latest news on the coronavirus pandemic.

Note: Because COVID-19 has become more endemic and in most countries isn’t disrupting the economy or politics as much as it did previously, we will drop our dedicated COVID-19 section beginning July 1.  We will continue to cover pandemic news as needed within our main text.

Russia-Ukraine:  Russian forces continue to make slow progress in seizing territory in Ukraine’s northeastern Donbas region, and they have reportedly been ordered to take the entire Luhansk administrative region by next Sunday.  They now control virtually all of Severodonetsk except for its Azot industrial complex.  They are also fighting hard to keep the Ukrainians from pushing them all the way to the Russian border north of Kharkiv.  Meanwhile, the Ukrainian military over the weekend appeared to step up its artillery and missile attacks in the Donbas, presumably using new, more advanced weapons arriving from the West.  The Russians retaliated with missile attacks on cities across Ukraine.  Russian authorities continue to struggle with consolidating control of occupied territories in the face of persistent Ukrainian partisan pressure. 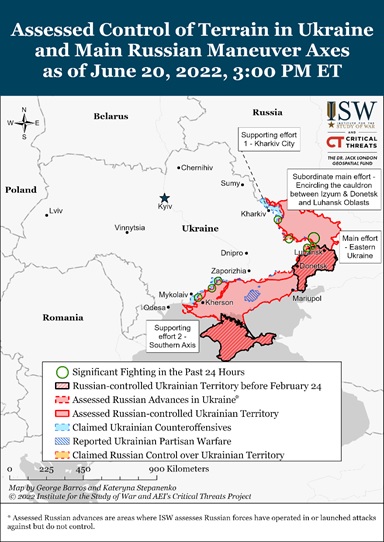 China:  On Friday, the navy launched its third aircraft carrier, christened Fujian.  The vessel will now require about two years of fitting out and sea trials before entering service around 2024.

Global Left-Wing Populism:  While the military developments described above are important, electoral victories by left-wing populists in Europe and Latin America over the weekend could be just as consequential.

Global Cryptocurrency Market:  In South Korea, prosecutors have banned Terraform Labs employees from leaving the country amid an investigation into the company and its co-founders following the late-May collapse of its TerraUSD stablecoin.

Israel:  Prime Minister Bennett, whose fragile coalition has recently started to splinter, said he would dissolve parliament and call for new elections.  Polls show Former Prime Minister Netanyahu’s Likud party is currently the most popular, but not so popular that it could win an outright majority in parliament when the elections are held sometime in the coming months.

U.S. Monetary Policy:  Over the weekend, two Federal Reserve officials signaled the central bank would continue to hike interest rates aggressively at its next policy meeting in July.  After the Fed’s big 75-basis-point hike in the benchmark fed funds rate last week, board member Christopher Waller said he would support a similar-sized move in July so long as economic data continues to show strong growth and high inflation.  Separately, St. Louis FRB President Bullard said the Fed has to meet investors’ expectations for continued big rate hikes.  Cleveland FRB President Mester said it would take a couple of years to return consumer price inflation to the Fed’s target of 2%.

U.S. Fiscal Policy:  President Biden said he hopes to decide by the end of this week whether to ask Congress to suspend the federal gasoline tax temporarily to help bring down the cost of fuel.  The federal tax of 18.4 cents per gallon amounts to 3.7% of today’s average retail price of $4.98 per gallon.

U.S. Economy:  Economists surveyed by the Wall Street Journal have dramatically raised their estimate of the probability of recession, now putting it at 44% in the next 12 months.  A recession likelihood at that level usually is seen only on the brink of or during actual recessions.  The increased probability reflects pressures ranging from the Fed’s ongoing rate hikes to high energy prices, the economic slowdown in China, and the war in Ukraine.

COVID-19:  Official data show confirmed cases have risen to  539,783,312 worldwide, with 6,320,517 deaths.  The countries currently reporting the highest rates of new infections include the U.S., Taiwan, Germany, and Brazil.  (For an interactive chart that allows you to compare cases and deaths among countries, scaled by population, click here.)  In the U.S., confirmed cases have risen to 86,297,195, with 1,013,493 deaths.  In data on the U.S. vaccination program, the number of people considered fully vaccinated now totals 221,924,152, equal to 66.8% of the total population.