Happy Monday, the day after the summer solstice.  Days will get shorter from here!  We are watching the destruction waged by TS Claudette that moved through the Southeast over the weekend.  The storm is on its way back to the Atlantic.  We are getting a reflation trade bounce this morning, although we have little faith it will hold.  Our coverage begins with the Iranian election.  A deeper dive into Fed policy follows.  There was a surfeit of political news from Europe, which we cover next.  China news follows.  Our international roundup comes next; economics and policy follow, and we close with pandemic news.

Iran Presidency:  As expected, Ebrahim Raisi won the presidency easily.  It was mostly rigged, as the Guardian Council eliminated nearly all the candidates and two conservatives withdrew from the race on Thursday.  Turnout was below 50% of voters, which does undermine his legitimacy.  Raisi is something of Ayatollah’s Khamenei’s executioner; as a prosecutor, he has overseen hundreds of executions.

The focus now shifts to talks on the U.S. returning to the nuclear deal.  There is an element of a “Nixon to China” moment.  Only an Iranian hardliner can make a deal with the U.S. because that person has political cover.  A moderate would be criticized by the conservatives.  In addition, Ayatollah Khamenei likely wanted a hardliner like himself to get credit for the lifting of sanctions.  Of course, there is the awkwardness that Raisi is under U.S. sanctions.

When Obama made the deal, it appears he saw it as an opening gambit to eventually give Iran the role of regional hegemon.  This would finally allow the U.S. to move on from the Middle East and focus on the Far East.  Obama assumed Clinton would win in 2016 and negotiate a broader agreement.  When Trump won, the Arab states and Israel moved quickly to isolate Iran and were successful.

As we move closer to a resumption of the agreement, its flaws will only be highlighted.  The U.S. would like a broader agreement that would include curtailing Iran’s missile program and its support of proxies throughout the region.  There is little chance Iran will give that up.  Iran wants assurances that a new administration won’t again withdraw from the agreement.  Since the Iran deal isn’t a treaty (which requires a two-third’s majority in the Senate), there is no guarantee a new administration wouldn’t withdraw again.  Although we suspect that the U.S. will return to the agreement, it probably won’t matter all that much.  Only nations like China and Russia will invest there, because any other nation knows that in 2024 the deal could be off.  There is fear in the oil markets that the return of the Iran deal will be bearish due to increased supply.  Any price weakness from that news isn’t likely to last.

The Fed:  The repercussions of the change in the FOMC’s tone continue to affect financial markets.  On Friday, after we published, St. Louis FRB President Bullard delivered a rather hawkish interview on CNBC.  As we noted on Thursday, the dots plot pretty much ended the Fed’s earlier narrative of no hikes through 2023, and no amount of discussion by the Chair at his press conference could undo the damage.  The market’s reaction has been swift and unmistakable.  The reflation trade is being unwound.  Commodities are under pressure, stocks fell, and the dollar appreciated.  Perhaps the most profound change has been in fixed income, where the yield curve flattened rapidly. 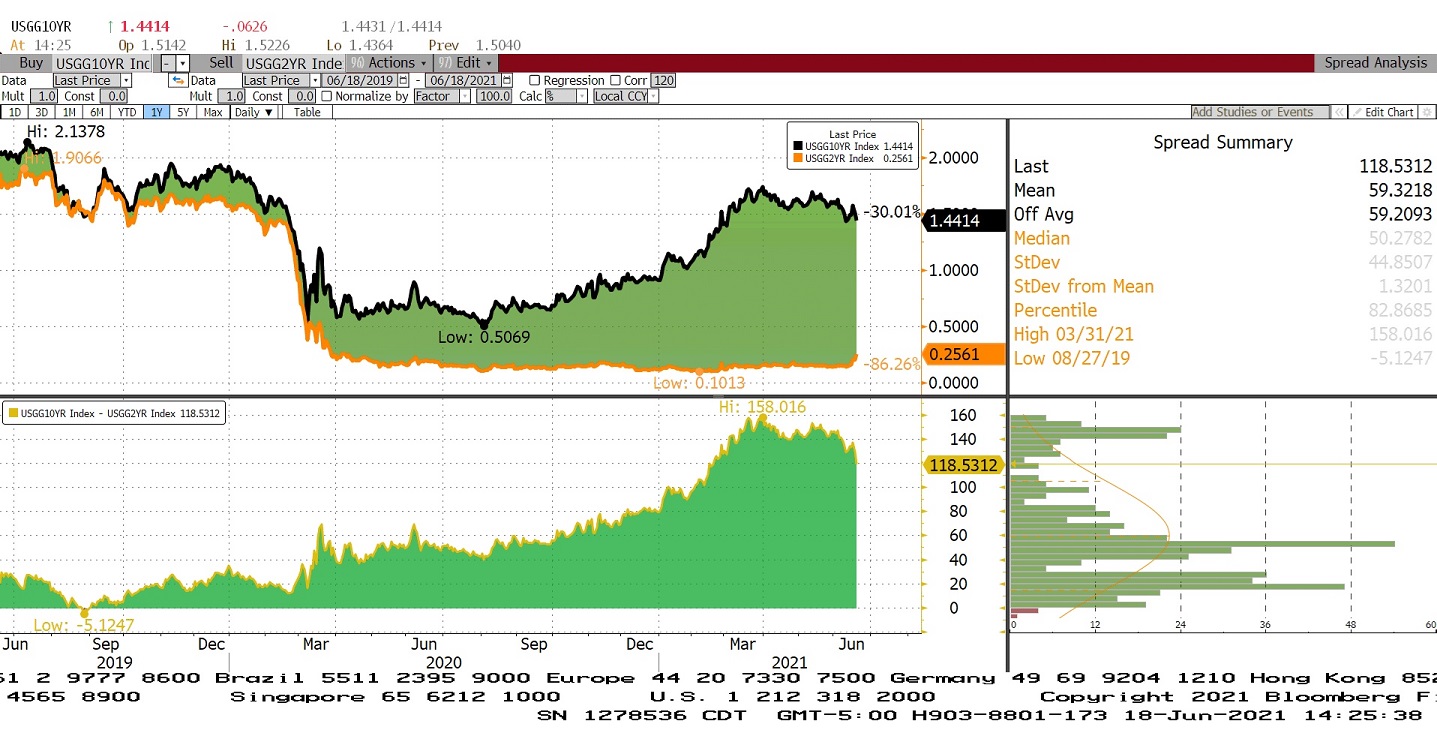 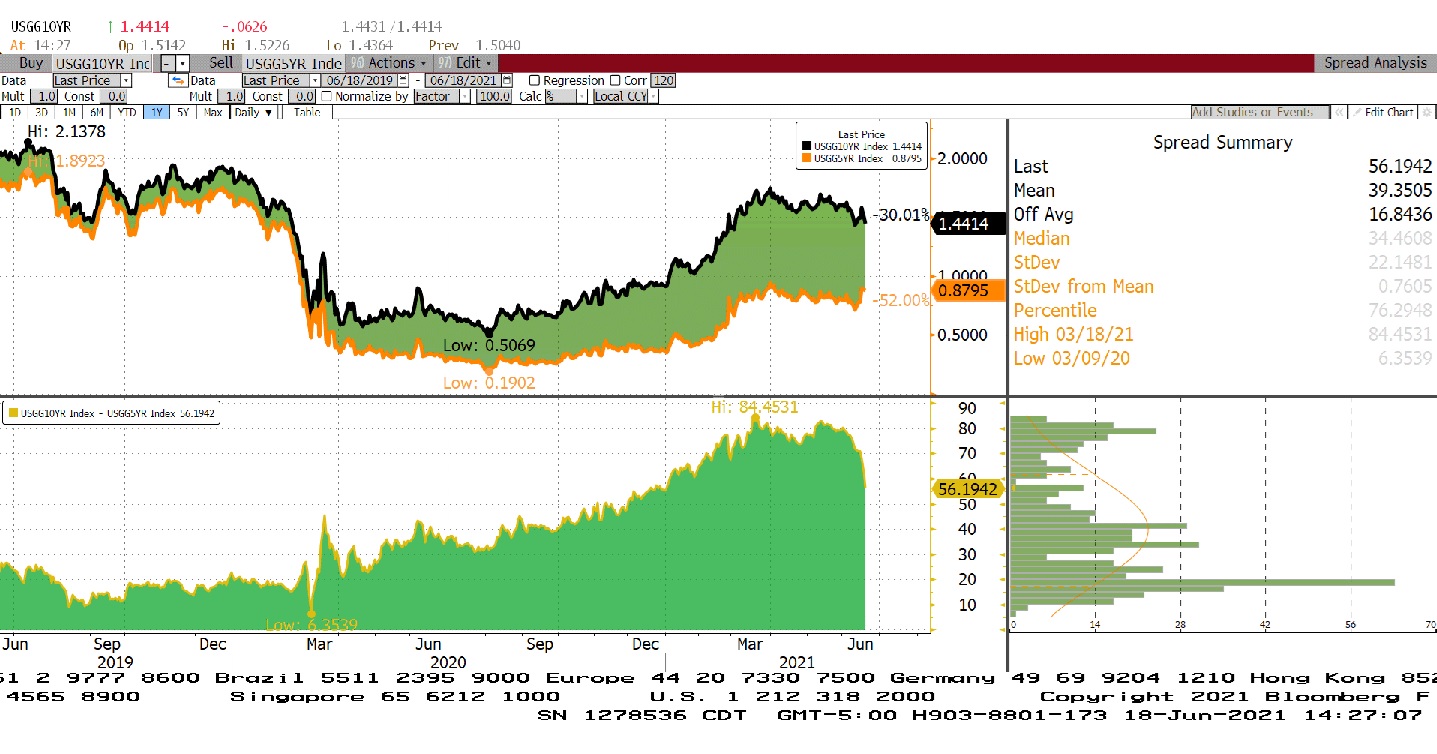 Although we are still a long way from inverting, the decline is unmistakable.

Meanwhile, the LIBOR futures are not yet factoring in rate hikes but are rapidly moving to a neutral position. 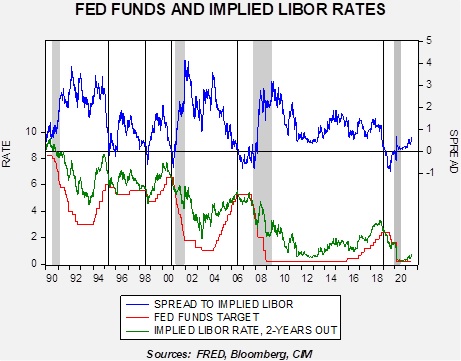 What happened here?  It appears that Powell was trying to engineer a regime change at the Fed, shifting from an exclusive focus on inflation suppression to a greater consideration of full employment.  The dispersion of the dots plot would argue that Powell has a rebellion of sorts on his hands.  At the same time, we note that not all members of the FOMC have turned hawkish; Minneapolis FRB President Kashkari is still calling for a steady policy through 2023.

Although commentators correctly point out that the Fed actually hasn’t “done” anything yet, this is misleading.  The flattening of the yield curve and the rise in Eurodollar futures rates will affect borrowing costs and potentially slow the economy.  Is the orthodoxy right?  It depends on the path of inflation.  If inflation is transitory, the Fed has made a mistake; the current turmoil is unwarranted.  If inflation expectations are rising, then tightening is the correct action, and we can expect the dots to steadily build in rate hikes.

For markets, the reflation trade—weak dollar, strong commodities, small caps over large caps, value over growth, and international over domestic—is in question.  There are still elements that argue for reflation; it’s not just the Fed that drives the trade.  Nevertheless, the Fed’s shift will lead to a recalibration of the position.

The EU:  Local elections show a recovery of the center-right, Sweden’s PM facing a no-confidence measure, and the DUP leader resigns.

China:  Germany is reluctant to oppose China, and the world is overly dependent on Taiwan for semiconductors.

International roundup:   New sanctions on Russia, North Korea is threatening the U.S., and Brazil is dealing with drought.

Economics and policy:  Tech remains under regulatory scrutiny, and a global tax deal may be unveiled by the end of June.

COVID-19:  The number of reported cases is 178,528,742 with 3,867,050 fatalities.  In the U.S., there are 33,542,382 confirmed cases with 601,825 deaths.  For illustration purposes, the FT has created an interactive chart that allows one to compare cases across nations using similar scaling metrics.  The FT has also issued an economic tracker that looks across countries with high-frequency data on various factors.  The CDC reports that 379,003,410 doses of the vaccine have been distributed with 317,966,408 doses injected.  The number receiving at least one dose is 177,088,290, while the number of second doses, which would grant the highest level of immunity, is 149,667,646.  The FT has a page on global vaccine distribution.