Good morning, all! U.S. equities appear to be headed for a lower open this morning. Today’s report begins with a discussion on the surge in reverse repos. International news follows, with reports on the Iranian presidential election and Nicholas Maduro hinting at a possible truce with the U.S. We review economics and policy news next, including a new federal holiday and the House’s withdrawal of authorization for the Iraq war. China news follows, and we close with our pandemic coverage.

Reverse Repos: The Federal Reserve’s reverse repos rose to a record $756 billion following the central bank’s rate increase in the interest it pays banks for its excess reserves (IOER) and overnight reverse repo facility. The attractiveness of reverse repos may be due to a collateral shortage caused by a lack of Treasury bills. Recently, the Treasury Department has been reluctant to issue new bills in fear of surpassing the debt ceiling before its deadline in July. This has forced financial institutions to obtain Treasury bills through the reverse repo facility. Although these financial institutions could have gone to money market funds, the yields on those funds, in some cases, were approaching zero. Hence, the rise in rates made reverse repos relatively more attractive when compared to the alternative.

The surge in reverse repos is likely a signal of the growing imbalances within the financial system. Over the last year, financial institutions have been flush with cash due to both fiscal and monetary expansionary policy. These institutions now have excess cash and, as a result, have struggled to find places to store it. Ironically, it was the opposite problem in September 2019, when the lack of cash caused repo rates to skyrocket. The issue illustrates the growing complexity of the financial system and the Fed’s inability to foresee problems before they occur. The problem also highlights the Fed’s need to pay closer attention to how its decisions may impact financial markets.

International news: Nigeria forces dealers to get rid of dollar holdings, Iran votes for a new president, and Maduro seeks a deal. 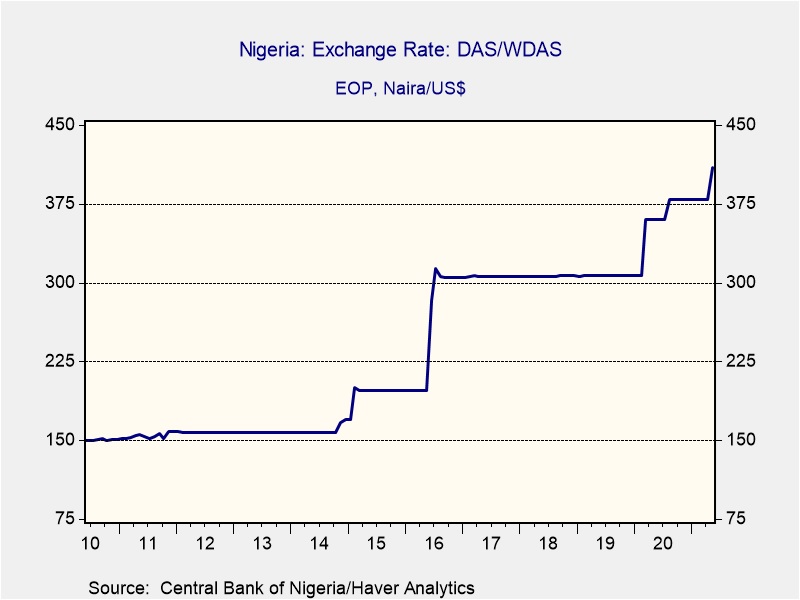 Economics and policy: Juneteenth becomes a federal holiday, the house revokes authorization of the Iraq invasion, and the Affordable Care Act survives.

COVID-19:  The number of reported cases is 177,201,586 with 3,836,092 fatalities.  In the U.S., there are 33,505,563 confirmed cases with 600,880 deaths.  For illustration purposes, the FT has created an interactive chart that allows one to compare cases across nations using similar scaling metrics.  The FT has also issued an economic tracker that looks across countries with high-frequency data on various factors.  The CDC reports that 377,215,060 doses of the vaccine have been distributed with 314,969,386 doses injected.  The number receiving at least one dose is 175,867,860 while the number of second doses, which would grant the highest level of immunity, is 147,758,585.  The FT has a page on global vaccine distribution.