We begin this morning in the wake of the Fed surprise.  As we discuss in detail below, the Fed made a hawkish turn, and we are getting the expected reaction—equities are lower, the dollar is up, and precious metals and commodities are lower.  We are seeing a rally in bonds this morning after they sold off yesterday.  Following our recap of the Fed meeting, our coverage continues with China news and the international roundup.  Economics and policy follow, and we close with the pandemic update.

The Fed:  The actual statement held no surprises; rates didn’t change, and neither did QE levels.  But, the dots plot, as we show below, signaled a profound shift.  Market reaction was swift and negative.  If there was any doubt that the recent strength in financial markets was dependent on accommodative monetary policy, yesterday’s FOMC meeting should dispel such notions.  Interestingly enough, changes to growth forecasts were rather modest, and expectations about inflation still show a drop in the growth rate over the next two years.  Even without expectations of stronger growth or higher inflation, the dots plot signals that rate hikes will commence in 2023 and may occur sooner. 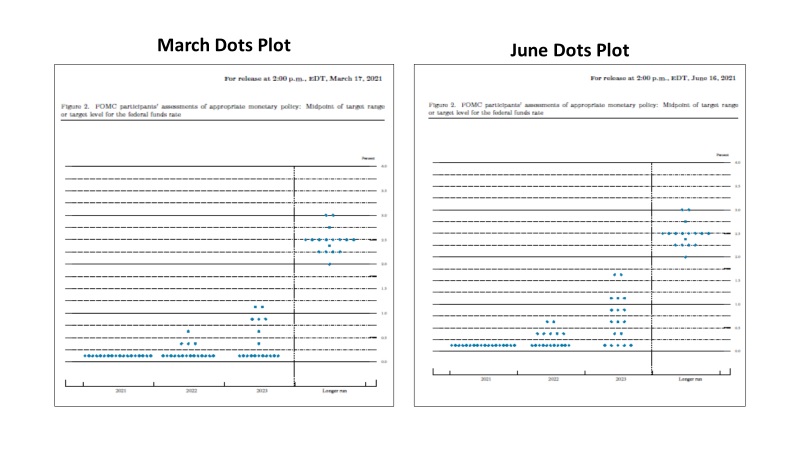 This chart shows the dots plots from March and June.  In March, only four members signaled a rate hike in 2022 and seven in 2023.  Yesterday, the Fed said that seven members are looking for a hike next year, and a clear majority looks to raise rates in 2023.  In fact, the weighted average fed funds rate for 2023 is 0.86% which is three rate hikes.

What happened here?  It appears that the FOMC has become spooked about higher inflation risks, even though the base forecasts suggest the committee doesn’t think inflation will persist in the future.  The clue is in the uncertainty polls.

In March, the committee had high uncertainty surrounding core PCE but thought the risks were mostly balanced between rising or falling.  In June, the clear majority was worried about higher inflation.

Although Chair Powell has moved to change the Fed’s focus to the labor markets and intends to no longer engage in policy pre-emption, this position doesn’t appear to have been fully accepted by the rest of the committee.  This signal of rate hikes suggests to us that the Fed still seems to be focused on quelling inflation expectations.  Yes, it’s true that the Fed didn’t raise rates, which would be true pre-emption (in fact, it is arguable the hikes should have already occurred).  However, the committee does want to signal the market participants that they are (a) worried about inflation and (b) are indicating they intend to do something about it.

Market reaction was swift; equities fell, longer duration rates rose, commodities declined, the dollar rose, and bitcoin and gold fell.  In trying to assign who is on each dot, one clue is that there were no dissenters in the statement.  That probably means that the two highest dots are George (KC) and Mester (CL), who are not current voters.  We would not be surprised if Brainard, Evans (CHI), and Rosengren (BOS) lifted their forecasts.  They are worried about overheating asset markets and thus would probably join the hawks in wanting to express concern.  Most of the remaining members are still likely holding to the Phillips curve view of the world and thus are uncomfortable with never-ending accommodation.

The Chair tried to downplay the dots as his predecessors have done[1] when they get an outcome that they probably disagreed with.  To quote Powell in full:

These are of course individual projections, they’re not a committee forecast, they’re not a plan, and we did not actually have a discussion of whether lift off is appropriate at any particular year. Because discussing lift off now would be highly premature, it wouldn’t make any sense . . . the dots are not a great forecaster of future rate moves and that’s because it’s so highly uncertain, there is no great forecaster of future rates, so [the] dots have to be taken with a big grain of salt.

Such statements beg the question…if the dots are so immaterial, why have them at all?  Despite this sentiment, the dots should be taken seriously.  The Chair has lost control of the narrative.  The members of the FOMC have become unnerved by the rise in inflation and are signaling that rate hikes are likely coming unless uncertainty about inflation eases.  In 2026, the Fed will release the full transcript of this meeting.  If we are still north of the dirt when it comes out, it will be at the top of our reading list.

What now?  The key we will be watching in the coming days is the reaction from the financial markets and the political class.  Occasionally, the FOMC and Fed Chairs float an idea to gauge the reaction of both.  What comes to mind is Greenspan’s “irrational exuberance” speech which was widely panned.  The political class wants an accommodative Fed forever; a tenant of MMT is a non-independent central bank that is in the service of the Treasury.  It will be interesting to see how political leaders react.  We fully expect the left-wing populists to lash out.  On the other hand, the establishment of all stripes will quietly cheer the FOMC for being responsible.

The other item to watch carefully is that if inflation does prove to be transitory, we could see the dots take a dovish turn in the future.  That idea is tempered by the fact that financial conditions have become remarkably easy. 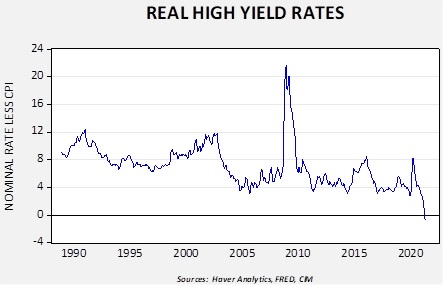 For example, for the first time ever, as this chart indicates, real high yield levels are negative.  The FOMC members who are sensitive to financial market froth will likely continue to press for policy tightening.

This potential shift in policy will lead to some degree of recalibration for financial markets.  Generally speaking, higher short-term rates are dollar bullish, equity bearish, commodity bearish.  Part of the recalibration will be further information that comes in the next few weeks.  FOMC members will fan out in the next few days and be questioned about this meeting.  The tenor of comments will be weighed carefully.  So, there is still more to come.  But a warning shot has been made and will be taken seriously.

China:  Beijing reacts to the Biden trip, and tensions between the U.S. and China remain elevated.

Economics and policy:  The EU has begun issuing Eurobonds, the FTC is taking a new look at antitrust, and bottlenecks are lifting prices.

COVID-19:  The number of reported cases is 177,105,723 with 3,834,719 fatalities.  In the U.S., there are 33,499,190 confirmed cases with 600,656 deaths For illustration purposes, the FT has created an interactive chart that allows one to compare cases across nations using similar scaling metrics.  The FT has also issued an economic tracker that looks across countries with high frequency data on various factors.  The CDC reports that 375,186,675 doses of the vaccine have been distributed, with 312,915,170 doses injected.  The number receiving at least one dose is 175,053,401, while the number of second doses, which would grant the highest level of immunity, is 146,456,124.  The FT has a page on global vaccine distribution.

[1] “I think that one should not look to the dot plot, so to speak, as the primary way in which the Committee wants to or is speaking about policy.” – Janet Yellen, March 19, 2014

“I think you could also retitle this conference “Why We Don’t Like the Dot Plot.” I think the dot plot is like the advanced level of the video game. If you haven’t been to the first 12 levels, forget about the dot plot.” – Ben Bernanke, November 30, 2016

[2] A good podcast on this issue can be found here.