Today’s Comment starts with a brief overview of central bank news from around the world, beginning with the market impact of the Federal Reserve’s decision to raise rates and ending with the broader market impact of global monetary tightening. Next, we examine the latest updates from the Russia-Ukraine war. We wrap up the report with U.S. economics and policy news and our daily COVID coverage.

Federal Reserve: The Federal Reserve raised its benchmark rate by 75 bps, the most significant hike since 1994. The market widely expected the increase as the hotter-than-anticipated CPI report suggested that inflation will probably be more challenging to tame than many FOMC members had initially expected. As a result, the Fed stated it is “strongly committed” to returning inflation to its 2% target.

Following the Fed meeting, Chair Powell stated that hikes of 75 bps would not be common and that typical hikes will probably be around 50 or 25 bps. The market reacted positively to the comment as many investors feared the Fed could raise rates by 75 bps or more throughout the rest of the year. Equities, bond prices, and crypto all rallied following Powell’s statement. The latest dots plot has the terminal fed funds rate at around 3.35%, suggesting this 75-bps hike was likely a one-off. This sentiment was further supported by the dissent from traditional hawk Kansas City Fed President Esther George in favor of a 50-bps hike. That said, the day after the Fed meeting, equity futures dipped over concerns that the central bank will not be successful in navigating a soft landing. 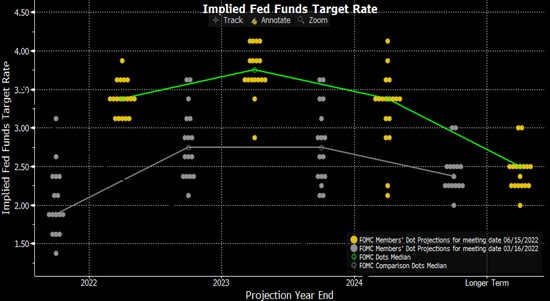 Bank of Japan: The BOJ is under pressure to lift its yield target of 25 bps. The yen has weakened significantly over the last few weeks due to concerns that the central bank is not doing enough to curtail inflation. However, the Fed’s decision to raise rates by 75 bps has at least temporarily provided some relief to the yen. There is growing speculation that the BOJ could decide to lift its yield cap to 50 bps. If this happens, the yen will likely appreciate against the U.S. dollar.

European Central Bank: The ECB governing council announced its plan to create a “new anti-fragmentation instrument” to quell concerns about a potential European debt crisis. Following the central bank’s decision to raise rates, there have been growing concerns about fragmentations within the EU. Fragmentation is when borrowing costs among countries diverge. To prevent interest rates from rising too much, the ECB will likely implement a form of yield curve control. One way to keep rates down involves the bank reinvesting proceeds from its portfolio into the bonds of vulnerable European economies. The move would likely mean the euro could weaken against the dollar.

Swiss National Bank: The SNB lifted its policy rate for the first time since 2007, which caught many investors by surprise. The central bank raised its benchmark rate by 50 bps to -0.25% and signaled that it might tighten more to keep inflation in check. Besides fighting inflation, the SNB president stated that the bank would buy foreign currencies to prevent excessive appreciation of the Swiss franc.

Bank of England: The BOE raised its benchmark rate by 25 bps to 1.25%, the bank’s fifth rate hike since December. The BOE policy rate has risen to its highest level since 2009. In a statement, the bank stated it would raise rates more aggressively to stamp out inflation. Moreover, the rate hike was less than investors expected, leading to a drop in the sterling.

In short, the Federal Reserve’s decision to raise rates by 75 bps has given other central banks more confidence to increase their respective policy rates. We suspect the major central banks are following the Federal Reserve’s lead in tightening, but their reluctance to become more hawkish is rooted in the desire to keep their country’s currencies from appreciating against the dollar. As the Fed continues to tighten monetary policy, we suspect global equities could become less attractive. However, banks may provide some investment opportunities as the industry is better positioned to benefit from potentially higher margins. 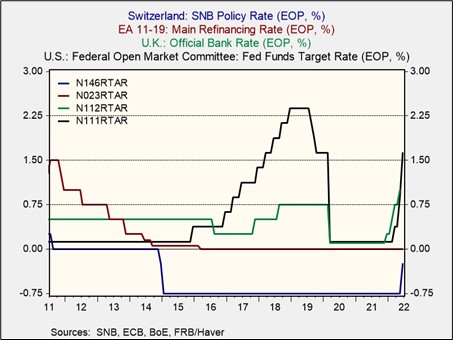 Russia-Ukraine: Fighting in Ukraine is currently at a deadlock, with neither side making noticeable gains. However, Russia appears to have the upper hand. President Biden pledged an additional $1 billion of military aid to help the Ukrainian soldiers in their war efforts. The new weapons will help Ukraine overcome Russia’s massive firearm advantage.

U.S. Economic and Policy News: Agricultural exporters are resilient in the face of inflation, and policymakers are scrutinizing crypto.

U.S. Exporters: U.S. food exporters have shown strong pricing power even with a strengthening dollar. The ability to push costs onto their customers suggests related companies may be attractive for diversification. The chart below shows the terms of trade index, which compares the price of exports relative to the price of imports. Since the war broke out in Ukraine, food producers in the U.S. have had significantly more success in pushing the rising costs onto consumers abroad than their foreign competitors. This could mean that U.S. exporters have relative advantage over their peers. 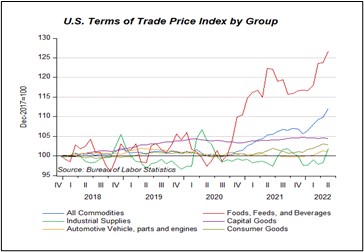 Crypto scrutiny: The House of Representatives Ways and Means Committee chair has asked a government watchdog to weigh in on crypto being used in retirement accounts. Policymakers have complained about the recent decline in digital assets and are looking for ways to regulate the crypto industry. The increased government scrutiny suggests that crypto is becoming more of a regulatory risk.

COVID-19: Official data show confirmed cases have risen to 537,209,701 worldwide, with 6,314,191 deaths. The countries currently reporting the highest rates of new infections include the U.S., Taiwan, Australia, and Germany. (For an interactive chart that allows you to compare cases and deaths among countries, scaled by population, click here.) In the U.S., confirmed cases have risen to 85,935,634, with 1,012,577 deaths. Regarding the U.S. vaccination program, the number of people considered fully vaccinated now totals 221,883,332, equal to 66.8% of the total population.