We open our Comment with an update on the Russia-Ukraine war, where we discuss how the conflict has become a competition of force generation and the two sides’ abilities to marshal resources for the fight.  Next, we review other international and U.S. developments with the potential to affect the financial markets, including a discussion of the Federal Reserve’s latest policy meeting, which starts today.  We wrap up with the latest news on the coronavirus pandemic.

Russia-Ukraine:  It is now clear that the war has become a competition of force generation.  The Russian military continues to seize small tracts of land in Ukraine’s eastern Donbas region, and it will probably capture the small city of Severodonetsk soon, but a wide range of evidence suggests it is too battered to do much more than that.  The evidence also suggests it won’t be able to rebuild its strength with sufficient new troops and equipment so long as President Putin declines to call a general mobilization.  Meanwhile, the Ukrainian military is running out of manpower, equipment, and ammunition (especially ammunition for its older Soviet-made weapons), and advanced weapons from the West are entering the battle only slowly.  In other words, the war has become a laboratory for “defense economics” like the world hasn’t seen in decades. 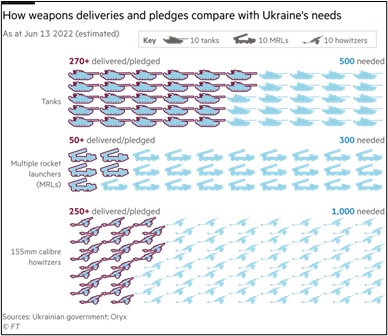 Global Oil Market:  In its monthly market report, the Organization of the Petroleum Exporting Countries (OPEC) said production among its 13 members dropped by 176,000 barrels a day last month to average roughly 28.5 million barrels per day.  The report showed that modest output increases by Saudi Arabia, the UAE, and Kuwait were offset by declines in countries such as Libya and Nigeria.  The data buttresses concerns that despite OPEC and its partners pledging to hike output, they may not be able to.  If so, that would point to the potential for further large increases in energy prices and general inflation going forward.

United Kingdom-European Union:  As expected, yesterday, Prime Minister Johnson’s government unveiled a proposed law that would allow it to tear up parts of its Brexit agreement with the EU, stoking fears of a trade war and drawing condemnation from the trade bloc.

United States-China:  In a dramatic example of the way the world is fracturing into separate geopolitical and economic blocs, Congressional negotiators working on a U.S. competitiveness bill have agreed on language that would require U.S. companies and investors to disclose certain new outbound investments to “adversary countries” like China and authorize the federal government to review and block them on national security grounds.  The U.S. government has long regulated certain high-technology exports and inbound foreign investment, but the proposed law would mark a significant new increase in the government’s ability to regulate outbound investment that could benefit foreign adversaries.

United States-Australia:  In a step that would help sever the U.S.’s reliance on Chinese rare earths and rare earth processing, the Department of Defense has signed a deal with an Australian firm to build one of the first U.S. domestic heavy rare earths separation facilities.  The U.S. currently has no operating commercial-scale processing facilities, raising concerns in Washington that the country could be cut off from these critical minerals in the future if relations with China deteriorate further.

U.S. Monetary Policy:  Federal Reserve officials today begin their latest policy meeting, with surging inflation readings leading some observers to think they could hike interest rates by a very aggressive 75 basis point.  We have even heard chatter about a possible 100-basis-point hike.  The policymakers will also release their latest “dot plot” projections for the economy and the path of future interest rates.

U.S. Tech Industry:  Apple (AAPL, $131.88) is under investigation by Germany’s antitrust watchdog over whether the company’s tracking rules for third-party apps give it preferential treatment or undermine its rivals.  The move is the latest sign of growing regulatory risks for major U.S. tech firms.

U.S. Servant Economy:  One interesting take on today’s high inflation and rising interest rates is that they threaten the budding “servant economy,” consisting of on-demand services like those of Uber (UBER, $21.57) and DoorDash (DASH, $58.38).  With inflation accelerating and interest rates rising, funding for such startups may be drying up.

COVID-19:  Official data show confirmed cases have risen to  535,940,921 worldwide, with 6,310,750 deaths.  The countries currently reporting the highest rates of new infections include the U.S., Taiwan, Germany, and Australia.  (For an interactive chart that allows you to compare cases and deaths among countries, scaled by population, click here.)  In the U.S., confirmed cases have risen to 85,632,808, with 1,011,543 deaths.  In data on the U.S. vaccination program, the number of people considered fully vaccinated now totals 221,727,733, equal to 66.8% of the total population.