Our Comment opens with an update on the Russia-Ukraine war; Russian forces continue to make some plodding progress in seizing territory in eastern Ukraine, while the Ukrainian forces look like they’re facing more problems with ammunition shortages.  We next review other international and U.S. developments with the potential to affect the financial markets today.  We wrap up with the latest news on the coronavirus pandemic.

Russia-Ukraine:  Russian forces continue to attack and seize small areas of Ukraine’s eastern region of Donbas while maintaining defensive lines in the areas it has seized in the south of the country.  In the Luhansk and Donetsk oblasts in the Donbas region, the Russians continue trying to encircle Ukrainian forces and take control of the strategically important city of Severodonetsk.  Ukrainian troops continue to repel many of the Russian attacks.  However, officials in Kyiv say the Ukrainian military is running low on ammunition for its Soviet-era artillery and has not received enough supplies from its allies to keep the Russians at bay.  The shortage of ammunition has put Ukrainian troops at a growing disadvantage in the artillery-driven war of attrition in the country’s east, with Russia’s batteries now firing several times as many rounds as Ukraine’s. 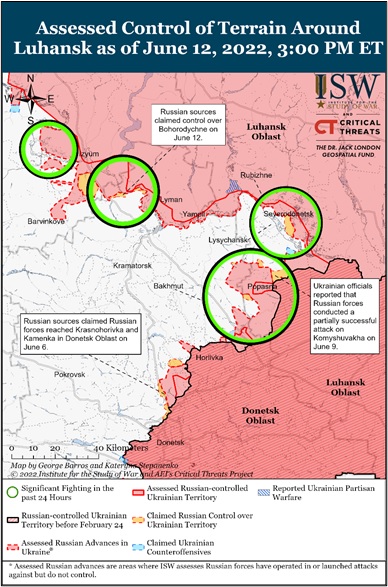 Global Market Rout:  Global investors are selling off a wide range of assets today as they respond to Friday’s report of accelerating consumer price inflation in the U.S. and weekend news of new COVID-19 cases in China.  At least one survey showing a large majority of academic economists now expect rising interest rates and high inflation to push the U.S. into a recession by next year, along with higher unemployment.  Major stock price indexes around the world are down sharply, with futures on the S&P 500 suggesting U.S. stocks will open in bear market territory.  Bitcoin and other major cryptocurrencies have fallen especially sharply after $12 billion crypto lender Celsius Network halted customer withdrawals in the latest sign of intensifying strains across the digital assets industry.  The value of Bitcoin (BTC-USD, 23,789.58) is now down almost 20% since Friday. 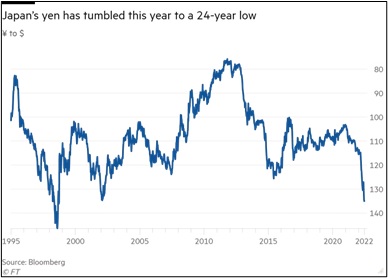 China:  Securities regulators and industry associations have instructed local and foreign banks to rein in executive pay levels, despite recent signs that President Xi Jinping was moderating his drive to promote “common prosperity” in other key sectors, especially high technology.  The news could be another reason for today’s rout in global risk markets.

Japan-South Korea:  In another important signal that Japan and South Korea are set to bury the hatchet on some other their outstanding grievances against each other, South Korean Defense Minister Lee Jong-sup said at the big Shangri-La Dialogue in Singapore that his country plans to step up cooperation with Japan over regional security threats.  Lee specifically mentioned working with Japan to counter North Korea’s missile threats, but the cooperation would also be useful to counter China’s growing assertiveness in the region.

United Kingdom-European Union:  Prime Minister Johnson’s government today plans to unveil a proposed law that would rewrite the Brexit agreement’s Northern Ireland protocol by ending the oversight role of the European Court of Justice as well as EU control over state aid and value-added tax in the region.  EU leaders have fiercely criticized the plan, which would likely worsen trade ties between the two economies and potentially feed into the global supply disruptions that are helping boost inflation.

France:  In the first round of legislative elections over the weekend, Jean-Luc Mélenchon’s leftist alliance gained strong support, although probably not enough to give it a majority in the National Assembly in the final-round voting next weekend.

COVID-19:  Official data show confirmed cases have risen to  535,316,609 worldwide, with 6,309,612 deaths.  The countries currently reporting the highest rates of new infections include the U.S., Taiwan, Germany, and Australia.  (For an interactive chart that allows you to compare cases and deaths among countries, scaled by population, click here.)  In the U.S., confirmed cases have risen to 85,515,980, with 1,011,277 deaths.  In data on the U.S. vaccination program, the number of people considered fully vaccinated now totals 221,714,657, equal to 66.8% of the total population.