Good morning, all! U.S. equities appear to be headed for a higher open this morning. Today’s report begins with an update on the infrastructure spending negotiations and an in-depth analysis of the CPI report. International news follows, with reports of sanctions being lifted on Iran and the EU ramping up its crackdown on U.S. tech firms. Economics and policy news are up next, including the meeting between President Joe Biden and U.K. Prime Minister Boris Johnson. China news follows, and we close with our pandemic coverage.

Infrastructure plan developments: A bipartisan group of 10 Senate Democrats and Republicans agreed to a $1.2 trillion infrastructure package over eight years. The package offers $579 billion in net new spending over that period, up from the more than $300 billion proposed by Senate Republicans in the previous week. The plan does not explicitly call for an increase in taxes; however, the proposal does allow for gas taxes to be indexed to inflation. The proposal appears to be a take-it-or-leave-it type of offer as it is unclear whether Senator Kyrsten Sinema (D-AZ) and Senator Joe Manchin (D-WV) will support an infrastructure package that isn’t bipartisan. At this time, it is unclear whether President Biden will agree to move forward with the proposal. Representatives from the White House seem to suggest that the president will likely push for additional changes to the bill. The gas tax provision is believed to be the president’s biggest source of tension as it would likely violate a pledge he made to not raise taxes on those making less than $400,000 annually.

Along came inflation: According to the Bureau of Labor Statistics, consumer prices rose to a 13-year high in May, surpassing the forecasts of most economists. The 5% year-over-year rise in the Consumer Price Index (CPI) has elevated concerns that inflation could be a sign of trouble within the economy. Here are a few takeaways we believe went unnoticed in the report: 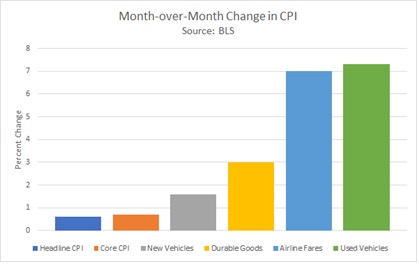 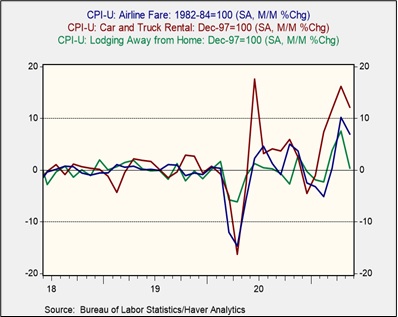 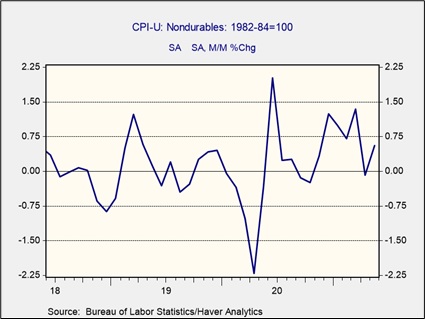 All that being said, we are still monitoring inflation very closely. We have noticed that certain regions have been impacted by inflation more than others. However, we still maintain that these inflationary pressures will likely be temporary. If we are wrong, we suspect it will likely be related to ongoing supply chain issues from firms that outsource some of their goods abroad. Additionally, if the labor shortage persists, it could also have an impact on inflation.

Economics and policy: U.S. not ready for another pandemic, leaders of the U.K. and U.S. meet, Puerto Rico is without power.

COVID-19:  The number of reported cases is 174,729,478 with 3,768,560 fatalities.  In the U.S., there are 33,426,302 confirmed cases with 598,716 deaths.  For illustration purposes, the FT has created an interactive chart that allows one to compare cases across nations using similar scaling metrics.  The FT has also issued an economic tracker that looks across countries with high-frequency data on various factors.  The CDC reports that 372,830,865 doses of the vaccine have been distributed with 305,687,618 doses injected.  The number receiving at least one dose is 172,423,605, while the number of second doses, which would grant the highest level of immunity, is 141,583,252.  The FT has a page on global vaccine distribution.