In today’s report, we examine the recent weakness in the yen. Up next, we review the latest developments in the Russia-Ukraine war. We briefly discuss some international and U.S. news stories and close with our COVID-19 coverage.

Dovish BOJ: The yen depreciated to a 20-year low against the dollar following concerns that the Bank of Japan will maintain its accommodative monetary policy while other central banks tighten. The sell-off in the currency was ignited after BOJ Governor Haruhiko Kuroda stated consumers have become more tolerant of higher price rises. Although Kuroda issued a retraction, the remark was viewed as a signal that the central bank may not remove policy accommodation to rein in rising inflation. The latest CPI report showed prices rose 2.4% in April, the fastest pace in over eight years. 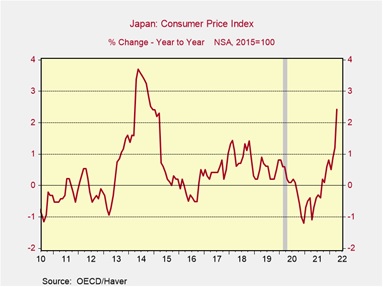 Japan’s high debt burden and reliance on exports for growth likely contributed to the country’s hesitancy to raise rates. Earlier this month, Prime Minister Fumio Kishida walked back an audacious pledge to balance the government’s budget by 2025. The change in tone suggests Tokyo would like to reduce its debt burden without hurting the economy. Japan has the highest government debt among advanced economies, so raising rates would complicate government efforts to reduce its debt burden. Moreover, Japan’s reluctance to raise rates along with other countries would also allow its currency to depreciate against other countries, therefore making its exports relatively more competitive. Delaying monetary tightening could potentially backfire. Japan imports over 90% of its energy resources. As a result, a declining yen would worsen the inflationary impact of rising commodity prices, therefore hurting business profitability, household budgets, and possibly slowing economic growth. That being said, the yen could strengthen if the U.S. were to slow down significantly or contract.

Russia-Ukraine update:  Russian forces continue focusing on taking over the Donetsk and Luhansk oblasts in Eastern Ukraine. There have been reports that Russia has seized control over Severodonetsk; however, Ukrainian officials have maintained that fighting is still taking place in the city. Ukrainian forces have focused their strategy on increasing the number of casualties rather than controlling the entire city. Meanwhile, Russia has engaged in informational warfare through social media and text on personal devices. Russia has used these platforms to threaten to harm Ukrainian soldiers or their family members if they do not surrender. The messages are intended to dent Ukrainian troops’ confidence, so they will not keep up the fight. Russia has been able to make substantial gains within Severdonetsk.

Chinese regulatory crackdown on its tech sector appears to be easing. This week, authorities ended their probe of the Chinese ride-sharing app Didi (DIDI, $2.51), cleared several video games for release, and there are rumors of a potential revival of the ANT Group Co. IPO[1]. The change in sentiment appears to be driven by Beijing’s desire to encourage more investment. It may be too soon to say whether the crackdown is ending, but the recent activity provides a favorable outlook for Chinese tech stocks.

COVID-19:  Official data show confirmed cases have risen to 533,761,253 worldwide, with 6,305,225 deaths. The countries currently reporting the highest rates of new infections include the U.S., Taiwan, Australia, and Germany. (For an interactive chart that allows you to compare cases and deaths among countries, scaled by population, click here.) In the U.S., confirmed cases have risen to 85,214,036, with 1,010,520 deaths. In data on the U.S. vaccination program, the number of people considered fully vaccinated now totals 221,567,092, equal to 66.7% of the total population.

[1] Officials have stated that these rumors were false.