We open our Comment today with an update on the Russia-Ukraine war, where the Russians continue to gain small amounts of territory in eastern Ukraine while the Ukrainians stage modestly successful counterattacks.  We next review a range of international and U.S. developments with the potential to affect the financial markets today, and we close with the latest news on the coronavirus pandemic.

Russia-Ukraine:  The Russian military continues to make slow, plodding progress toward its scaled-down goal of seizing Ukraine’s eastern Donbas region and southern coast, but because of continued leadership and operational errors, it also continues to take heavy losses in terms of commanders, troops, and equipment.  In fact, new reporting suggests that not one but two Russian generals were killed in the Donbas region last week, bringing the total number of Russian generals killed in the war to 12.  Meanwhile, Ukraine’s smaller but highly motivated and well-led military continues to carry out successful counteroffensives as it receives more advanced weapons from the West.  As an example of the weapons shipments, reports yesterday said the Spanish government is working to send German-made Leopard tanks and anti-aircraft missiles to Ukraine and help train Ukrainian soldiers to use them.  Separately, it appears Western anti-ship missiles have allowed the Ukrainians to force the Russian navy away from Ukraine’s coast.  According to the Institute for the Study of War, “Ukraine will likely attempt to leverage these successes to alleviate the economic pressure of the Russian blockade on Ukraine’s ports and seek additional economic support from the west, including possibly opening up new routes for international aid to Ukraine.”

Australia:  The Reserve Bank of Australia hiked its benchmark short-term interest rate by an unexpectedly aggressive 50 basis points, lifting the official cash rate to 0.85% from 0.35% previously.  The hike was the RBA’s biggest since February 2000.  After a 25-basis-point hike in May, it also marked the institution’s first back-to-back rate increase since 2010. 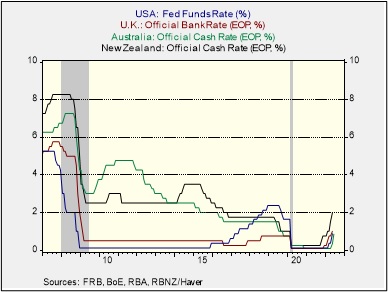 Japan:  Today, the Cabinet approved Prime Minister Kishida’s first full-year fiscal and economic policy guidelines, but the plans have one glaring omission: they omit previous government pledges to eliminate the country’s fiscal deficit by 2025 and start bringing down its massive debt, which is now more than 200% of Japan’s gross domestic product.

United Kingdom:  Prime Minister Johnson survived his party’s confidence vote yesterday, with 211 of the Conservative Party’s members of parliament voting to support him and 148 voting against him.  Under party rules, Johnson now cannot be challenged for another year.

Israel:  Prime Minister Bennett’s broad coalition lost a crucial vote in parliament, putting it on the verge of collapse.  The vote, instigated by right-wing former Prime Minister Netanyahu, could set the stage for yet another election in the coming months.

Mexico:  The country’s ruling leftist party, Morena, is on track to win four of the six state governorships contested in elections last Sunday.   The results upset the center-right opposition parties’ recent momentum against left-wing populist President Andrés Manuel López Obrador and will complicate their path to victory in the 2024 elections.

Egypt:  In an example of the inefficiencies likely to arise from deglobalization and the fracturing of the world into rival geopolitical and economic blocs, the Egyptian government is trying to cope with the cut-off of Ukrainian wheat supplies by encouraging more domestic production.  The problem is that agricultural land reclaimed from the Egyptian desert isn’t necessarily that productive.

U.S. Real Estate Market:  According to MSCI Real Assets, April commercial real estate sales were down 16% from the same period one year earlier, marking a sharp reversal after 13 straight months of year-over-year increases.

COVID-19:  Official data show confirmed cases have risen to  532,444,602 worldwide, with 6,300,269 deaths.  The countries currently reporting the highest rates of new infections include the U.S., Taiwan, Australia, and Germany.  (For an interactive chart that allows you to compare cases and deaths among countries, scaled by population, click here.)  In the U.S., confirmed cases have risen to 84,882,382, with 1,008,858 deaths.  In data on the U.S. vaccination program, the number of people considered fully vaccinated now totals 221,506,997, equal to 66.7% of the total population.