Good morning! Today’s report begins with an update on the Russian invasion of Ukraine. Next, we discuss the latest economic and policy news, including our thoughts on recent Fed comments. Afterward, we review some international stories that could impact markets today and close with our COVID-19 coverage.

Russia-Ukraine update: As the war enters its 100th day, Moscow has more military success, but it appears to be coming at a high cost. According to Ukraine President Volodymyr Zelensky, Russian forces now control one-fifth of Ukraine and continue to make incremental gains in the eastern region. In addition, Russian troops are closer to capturing Severodonetsk and Lysychansk, two major cities in the Russian stronghold Luhansk. Despite Russian gains, Ukrainian troops have recovered much of the region it lost and still pose a significant threat in northern parts of the country. Additionally, Russian military leaders have expressed concern over the lack of forces and the low morale of many of its troops. As a result, it isn’t clear whether or not Russia will be able to sustain the current momentum.

Off the battlefield, Moscow is also finding more hardship. On Thursday, the U.S. expanded its sanctions list to include individuals with ties to Russian President Vladimir Putin. Meanwhile, Russia struggles to find outside backing for its invasion of Ukraine. In the run-up to its attack, Moscow appeared confident that Beijing would support its ambitions to limit the expansion of NATO into Ukraine. However, China has been reluctant to offer any support that could make it a target of U.S. sanctions. Russian shortcomings in the war have led some members of the Chinese elite to push Beijing to abandon Moscow altogether.

It should be noted that the relationship between China and Russia is one of convenience as opposed to one of kinship. The two sides are united in their desire to limit U.S. influence worldwide but have different views on how a new world should look. China would like the international system to remain in place but with reforms. Russia would like the system replaced altogether. The difference in views stems from the fact that China has benefited from the rise in globalization while Russia has not. For example, China’s GDP growth accelerated following its admission into the WTO in 2001, while Russia’s has seen only a modest rise within that same time frame. 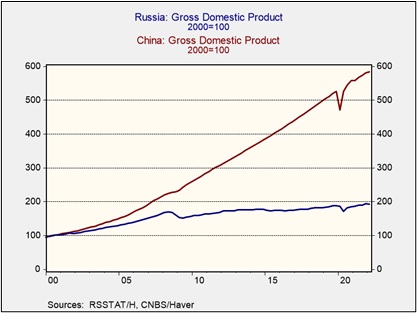 Although both China and Russia dislike when the U.S. meddles in their respective affairs (Taiwan, Ukraine, etc.), their strategies to address these issues are different. Russia would prefer to cause chaos to tear the system down. China, on the other hand, prefers to make incremental gains, hoping it will be able to take it over. This conflicting view has become more apparent after the invasion of Ukraine. Beijing supported Russia because it believed Putin when he said it would be quick. However, since the war has gone longer and with higher costs than either side initially thought, Beijing has been reluctant to offer the support Russia desires. As a result, we do not expect China to provide any significant support in the future. If we are correct, this could mean that this war may not be as costly, which should be favorable for the global economy and financial markets.

To keep menu prices down, restaurants have started adding new surcharges to bills to cope with rising input and labor costs.