Today’s Comment opens with an overview of yesterday’s “Beige Book” report from the Federal Reserve, which pointed to accelerating economic growth but continued inflation pressures.  Sticking with the inflation theme, we then review the latest UN data on global food prices.  Various international news items follow, and we wrap up with the latest developments on the coronavirus pandemic.

U.S. Monetary Policy:  In its latest Beige Book analyzing business anecdotes on the state of the economy, the Fed said activity expanded “somewhat faster” in April and May than it did in the previous period, driven largely by increased coronavirus vaccinations, the easing of pandemic lockdowns, and rebounding consumer demand for services.  The report discussed how supply disruptions and shortages across many industries are driving up costs, but it noted that rebounding demand often allows firms to pass on those costs to their customers in the form of higher prices.  In summary, the report judged that “. . . expectations changed little, with contacts optimistic that economic growth will remain solid . . . Looking forward, contacts anticipate facing cost increases and charging higher prices in coming months.”

Global Food Inflation:  The UN Food and Agriculture Organization said its May index of global food prices was up 39.7% from the same month one year earlier, marking its biggest annual increase since 2011.  The report attributed the surge in food inflation to a range of factors, including the increased use of vegetable oil for biodiesel, China’s soaring appetite for grain and soybeans, and a severe drought in Brazil.  As a result, the annual price increases were especially large for vegetable oils and cereals (see chart below). 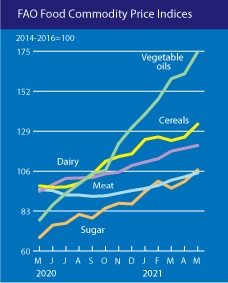 United States-United Kingdom, et al:  U.S. Trade Representative Katherine Tai said the Biden administration would impose punitive tariffs on the U.K., Italy, Spain, Austria, India, and Turkey in response to their digital-services taxes on U.S. technology companies.  However, Tai said the administration would suspend the levies for six months while it seeks to negotiate an international resolution to the issue under the auspices of the G20 and the OECD.

United States-Russia:  Officials at the White House said President Biden will pressure Russian President Putin to crack down on his country’s computer hackers when the leaders meet later this month.  The officials said Biden would also not rule out retaliating against the Russian criminal gangs that carried out the recent ransomware attacks on Colonial Pipeline and meat company JBS.  We suspect the U.S. has greater offensive cyberwarfare capabilities than is widely known, so the administration could impose a painful punishment on the hackers if it is willing to reveal some of its weaponry.  Ultimately, however, addressing the problem will probably require pressuring the Russian government to not give the hackers a safe haven for launching their attacks.  That implies further U.S.-Russian tensions.

Israel:  Consistent with the reports we’ve been writing about, right-wing politician Naftali Bennett, centrist Yair Lapid, and other opponents of Prime Minister Netanyahu agreed to form a coalition government that will oust him.  If the government is sworn in within the next two weeks, Netanyahu would cede power to the most diverse coalition in Israel’s history, including,  for the first time, an independent Arab party.

Iran:  One of the largest ships in the Iranian navy caught fire and sank in the Gulf of Oman yesterday, followed hours later by a major fire at an oil refinery near Tehran.  The mysterious incidents immediately raised suspicions that they could have resulted from Israeli sabotage.  If those suspicions lead to fears over Persian Gulf oil supplies, they could give a further boost to the commodity markets.

Nicaragua:  Police arrested President Ortega’s most prominent political opponent, Cristiana Chamorro, after searching her home for at least five hours in what her family said was the latest attempt to keep her from challenging the authoritarian Ortega in November’s presidential elections.