[Posted: 9:30 AM EDT] Happy employment day!  The employment data is covered in detail below but the snapshot of the data is supportive.  Payrolls rose 222k compared to forecasts of 178k; we also saw a 47k upward revision, making the report robust.  The unemployment rate came in at 4.4% versus expectations of 4.3%, mostly due to a rise in the labor force and increased participation.  Wage growth remains sluggish at 2.5%.

There is not much new to report on the G-20.  We expect a contentious meeting where the differences between the emerging American policy of exiting the hegemonic role collide with the rest of the world’s terror at realizing the U.S. world order of the past 72 years is coming to a close.  It should be noted that this retreat has been underway since 2008 and President Trump is merely making the case more clearly, but the American public, painfully aware of the costs of hegemony but inured to the benefits, has simply had enough of supporting the world.  We note that Japan and the EU have apparently negotiated a new trade deal.  This will be interesting to watch—how does a trade deal work between two parties that are running export-promoting policies?  In addition, trade rests on the U.S. providing global security.  Who will guarantee the sea lanes between Japan and Europe?  China?  Overall, we don’t expect much out of the G-20 other than clarity that the world is changing rapidly.

This chart shows current crude oil inventories, both over the long term and the last decade.  We have added the estimated level of lease stocks to maintain the consistency of the data.  As the chart shows, inventories remain historically high but they are declining.  We also note that, as part of an Obama era agreement, there was a 1.4 mb sale of oil out of the Strategic Petroleum Reserve.  This is part of a $375.4 mm sale (or 17.0 mb) done, in part, to pay for modernization of the SPR facilities.  We note that sales have reached 13.1 mb this year, which likely means we should see these sales end in the coming weeks.  International agreements require that OECD nations hold 90 days of imports in storage.  Due to falling imports, the current coverage is near 140 days.  Taking that into account, the draw would have been 6.7 mb, which is an even more impressive draw.

As the seasonal chart below shows, inventories are usually well into the seasonal withdrawal period.  This week we saw an acceleration in the decline.  Some of this was likely due to weather disruptions caused by Hurricane Cindy.  Still, we have already seen a larger than normal seasonal decline and the seasonal trough isn’t usually hit until mid-September.  Thus, we should see further stock withdrawals over the next couple of months. 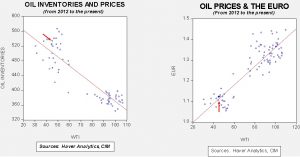 Based on inventories alone, oil prices are overvalued with the fair value price of $40.27.  Meanwhile, the EUR/WTI model generates a fair value of $52.55.  Together (which is a more sound methodology), fair value is $48.61, meaning that current prices are well below fair value.  Currently, prices are below our expected trading range; we view oil prices as attractive on a short-term trading basis.  Yesterday’s DOE data was bullish.  The drop in prices is therefore a worry because markets that fail to positively react to bullish data usually face further selling.  We do expect oil prices to rise in the coming weeks, simply because the fundamentals are supportive.