[Posted: 9:30 AM EDT] Financial markets are attempting to stabilize in front of tomorrow’s employment data.  We did get the ADP data (see below), which came in above forecast and rather strong compared to last month.  Current expectations call for a 180k rise in payrolls and a 4.8% unemployment rate (+0.1%).  We tend to believe that the May data was an anomaly and non-farm payroll growth between 150k and 200k is the norm.  If the U.S. is unable to grow the labor force (or, to put it another way, raise the participation rate), then we are running up against labor market constraints and payroll growth should weaken.  But, we doubt that is the case.  The lack of labor force growth is complicated, a combination of skills mismatches, less mobile labor force and aging baby boomers. 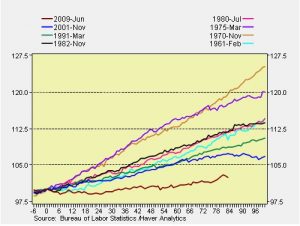 In Europe, starting with the U.K., the Conservatives have narrowed their choices for David Cameron’s successor to Home Secretary Theresa May and Energy Minister Andrea Leadsom.  Michael Gove was eliminated after this cycle of voting.  Of the two, Leadsom is the most supportive of Brexit.  Current betting pools indicate that May will be the most likely winner, although the actual vote among Tories won’t be held until September.  If May remains the frontrunner, it increases the likelihood that the U.K. exit will be amicable and, in fact, might not occur.  Meanwhile, in Italy, talks between the EU and Italian authorities over the banking situation have stalled over government involvement in the bailout.  The EU wants creditors to be the first line of defense for bank recapitalization rather than governments.  The problem is that, in Italy, the banks have sold bonds to households that appear to be viewed as forms of deposits.  It is estimated that households own about a third of Italian bank debt securities.  The EU rules are designed to protect taxpayers from bank bailouts and force creditors to carry the bulk of the risk.  However, in Italy, this isn’t much different than having depositors bear the risk of a bank failure.  If the bonds take a hit it could easily create conditions for a bank run.  The FT is reporting that the populist Five Star party is surging in the polls.  The latest polls show support for Five Star at 30.6%, exceeding the governing PD party support of 29.8%.  In January, the PD led by six points.  PM Renzi is holding a referendum on streamlining the structure of government in October.  If the vote fails, we expect the Renzi government to fall.  At present, the odds of such a rupture are rising.  Finally, Reuters is reporting that about a third of Eurozone sovereign bonds are ineligible for QE because they yield less than the -0.4% deposit rate set by the ECB.  Brexit has exacerbated this problem; before the vote, about 22% were ineligible.  The WSJ reports that QE has reduced the availability of sovereign bonds to the financial system.  Without risk-free bonds for collateral, QE inadvertently undermines the operations of the shadow banking system, reducing the availability of credit.

The FOMC minutes didn’t tell us much other than the members were dealing with such uncertainty that they all agreed not to make any changes.  If we get a rebound in the employment data tomorrow, expect to see the markets rebuild at least some possibility of rate hikes.  That result would be dollar bullish and Treasury bearish.