In today’s Comment, we open with a lengthy discussion of the Chinese government’s latest clampdown on its technology firms.  Importantly, we discuss the move’s implications for a range of geopolitical and economic issues.  We next turn to general international news, ranging from recent OPEC developments to rising protests against the Brazilian president.  We close with the latest news on the coronavirus pandemic.

China:  According to reports over the weekend, Chinese regulators are investigating the security of customer data at ride-hailing company Didi Global, Inc. (DIDI, $15.53) and have shut down the firm’s app just days after its U.S. IPO last Wednesday.  Subsequently, they also launched probes into data security at two other U.S.-listed companies that run truck-hailing and recruiting apps.  The regulators’ concerns ostensibly center on the possibility that troves of customer data at the firm could potentially fall into foreign hands as a result of greater public disclosure associated with a U.S. listing.  In fact, the reports indicate the regulators pressured the company not to go through with its IPO, although, with the absence of a formal order not to proceed, the company went ahead with it.  Given the regulatory threat to the company, we would expect its shares to face tough sledding when U.S. markets open on Tuesday.  At the same time, we would emphasize a number of broader, longer-term implications of the move:

China-Taiwan-Japan-United States:  Japanese Deputy Prime Minister Aso said that if China invaded Taiwan in order to reunify the island with the mainland, it could create a situation that threatened Japan’s survival and would require it to defend Taiwan along with the U.S.  Under Japan’s constitution, such a “survival threatening” situation would allow Japan to exercise its right of collective self-defense and come to the aid of an ally under attack.  As might be expected, the Chinese government has condemned the statement.

OPEC+:  OPEC and its Russia-led allies were forced to call off a Monday meeting that would have finalized a plan for the group to boost oil production after the United Arab Emirates balked at its quota.  In response, global crude prices have risen to fresh multi-year highs.  We note that if the deal falls apart completely, the UAE could unilaterally boost its output.

Global Supply Chain Management:  For the first time, Toyota (TM, $176.03) sold slightly more cars in the U.S. than General Motors (GM, $58.96), in large part because it abandoned its previous strict adherence to just-in-time inventory management.  In particular, the company’s earlier decision to stockpile several months’ worth of computer chips allowed it to out-produce GM earlier this year despite the global chip shortage.  Although Toyota may not be able to retain its lead when supply chains normalize, its victory in the second quarter is further evidence that companies are starting to understand the risks inherent in just-in-time systems, even if they are more efficient.  If more firms turn toward higher inventories, greater production redundancies, and the like, the world’s supply chains could become more robust, but costs and inflation could be higher.

Global Cybersecurity:  Suspected Russian cybercriminals launched a massive ransomware attack over the weekend against mostly small and medium-sized firms in at least 17 countries.  The attackers have demanded $70 million in Bitcoin in exchange for a decryption tool to restore the thousands of computers affected.  Companies and security experts continue to assess the extent of the damage.

United Kingdom:  British companies are facing a wave of buyouts by private-equity firms, and the buyout firms are staffing up to increase the pace of deals even further.  Consistent with our belief, the firms see new trade opportunities in post-Brexit Britain, even as company valuations remain in the doldrums because of Brexit and the coronavirus pandemic.

Mexico:  In another blow to the country’s private sector and its 2013 energy market reform, the government awarded control over the 700-million barrel Zama field to state-owned oil company Pemex despite the fact that it was discovered by private firms, which have invested hundreds of millions of dollars into the field’s development.

Brazil:  Thousands of protesters across Brazil demonstrated against President Bolsonaro over the weekend as pressure mounted on the populist leader over allegations of potential corruption in the procurement of COVID-19 vaccines.  The rallies, which took place in at least 13 state capital cities, came a day after the Supreme Court authorized a criminal investigation into whether Bolsonaro engaged in the crime of “prevarication,” the dereliction of public duty for reasons of personal interest.

Turkey:  The June consumer price index was up 17.5% year-over-year, surpassing expectations and marking the worst inflation in more than two years.  The jump in inflation came after the easing of pandemic restrictions last month boosted consumer spending, complicating efforts by the central bank to comply with President Erdogan’s demand to cut interest rates. 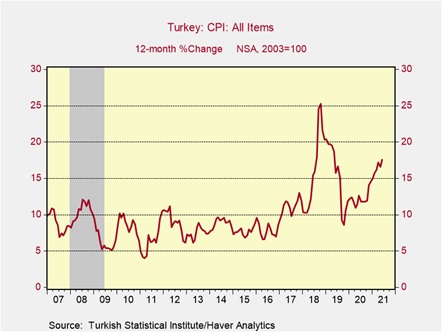