[Posted: 9:30 AM EDT] It’s more of the same this morning.  The GBP has declined under $1.30, worries are present about Italian banks becoming a systemic risk and we continue to see the relentless decline in sovereign yields.  China is continuing its “stealth” depreciation.  Here are a few charts of note:

This chart shows an index of Italian banks.  Shares are testing the lows seen during the 2012 Eurozone crisis.  The key conflict is that Italian banks are sitting on €360 bn of non-performing loans (NPLs).  Under normal circumstances, in a nation that prints its own currency, the banking crisis could be averted by the government borrowing money to either create a functioning “bad bank” to buy the NPLs or directly recapitalize the banking system.  If the lira still existed, the exchange value would be tumbling but the banking system would be safe.  However, the Bank of Italy can’t produce euros.  This doesn’t necessarily mean that the Italian government can’t issue euro debt to address its banks, but it will run afoul of EU rules regarding government debt issuance if it does.  It would not be a huge surprise to see yields on Italian sovereigns rise, although that hasn’t been the case recently.  Since Brexit, Italian 10-year yields have fallen from 1.50% to near 1.20%.  The odds of a conflict between the EU (read: Germany) and Italy over a bank bailout are rising and that risk is clearly weighing on Eurozone sentiment and Italian banks.

Here’s a chart for historical reference: 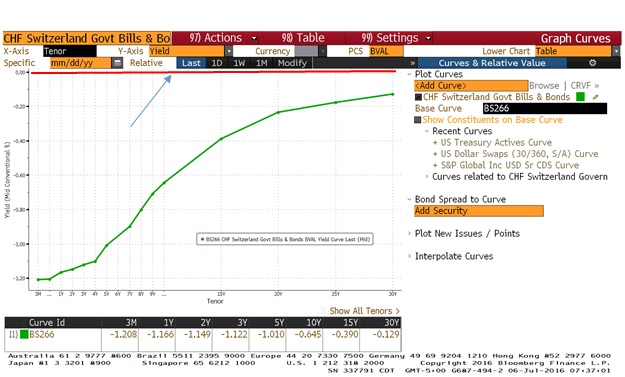 This chart shows the Swiss sovereign yield curve.  We have placed a solid red line at zero (noted with an arrow).  The entire Swiss yield curve is now below zero.  There isn’t much more to say on this issue, other than this must reflect deflation threats and weak global growth.

The GBP remains under pressure.

This shows the pound has dipped under $1.30 (although chartists will note that this candlestick chart’s entry for today may be signaling a “hammer,” which occurs with a short body at the upper end of the bar with a long “stalk,” mimicking a hammer, supposedly to hammer out a bottom).

Perhaps of greater interest is the continued softening of the CNY.

It is becoming increasingly clear that the PBOC is using global turmoil to reduce the value of the CNY.  This drop will make Chinese exports more competitive and put greater deflationary pressures into the global economy.

All in all, today is more of the same.  However, the trends in place are not giving positive signals for global growth.