(NB:  We are publishing an abbreviated report today.  Because of the all-important labor market data, we wanted to provide our coverage of that issue and the usual energy market update as well.  Additionally, the AAW will be updated.  But the headings in yellow are not updated.)

Happy employment Friday!  We cover the data in detail below, but the quick take is that the report was much stronger than forecast.  It is bearish for bonds and has led equity futures lower this morning.  Otherwise, it was a quiet overnight session for most markets with the U.S. taking yesterday off for the Independence Day holiday.  There was an earthquake in California yesterday; damage appears to be minor.  Here’s what we are watching today:

Getting to know you, EU style: Ursula von der Leyen, the candidate for EU Commissioner, is making the rounds in Brussels to introduce herself and drum up support for confirmation of her appointment. So far, it appears her reception has been less than warm.  Despite the chilliness, we do expect her to be approved, mostly because the EU leadership will dole out positions to groups that could block her elevation.  The key to watch is the Greens; they haven’t been much of a power before and if they flex their new electoral muscles, the center-left could be mostly shut out.

Iranian oil tanker seized:  The Royal Navy seized a Panamanian-flagged tanker thought to be carrying Iranian oil that was in route to Syria.  Although the EU has not signed on to the U.S. sanctions against Iran (and this oil shipment would violate U.S. sanctions) the British captured the vessel because shipments to Syria would violate EU sanctions against the Assad regime.  The tanker was seized near Gibraltar, which is controlled by the U.K.  Needless to say, Iran is furious about the act.

China on trade: Although the financial markets celebrated the China/U.S. trade ceasefire negotiated at the G-20, the odds of a lasting deal look rather long.  China said today that a precondition of a deal is that the U.S. must remove all tariffs.  Robert Lighthizer, the USTR, has made it clear that he wants to keep the threat of tariffs in place as a way to maintain Chinese compliance on any trade agreements.  It would be hard for the U.S. to back away from tariffs because Lighthizer is right—China probably won’t comply with the agreement without the threat of tariffs.

Snap elections in the U.K.? Tory officials are quietly preparing for snap elections in case he can’t get a better deal from the EU (a new deal from the EU is highly unlikely) and the current Parliament won’t accept a no-deal Brexit.  New elections would be risky; it is quite possible that a Corbyn-led Labour Party would win which would send financial markets into a downspin.

A deal in Sudan: Civilian and military leaders have reached an agreement on power sharing.  Power will rotate between military and civilian leaders over the next three years.  At that point, the military will end the arrangement and Sudan will be under civilian rule.  Although the agreement should bring peace to the country, the obvious sticking point is if the military will really leave power when the time comes. 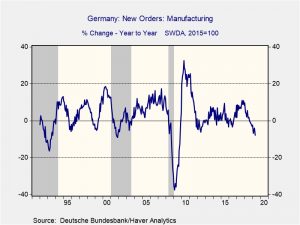 This chart shows German manufacturing orders on a yearly basis, with recession shading reflecting German recessions.  The current decline is consistent with previous downturns and would suggest that the German economy is probably in recession.  The German 10-bund fell to a -0.40%, a new record low.

Based on oil inventories alone, fair value for crude oil is $51.89.   Based on the EUR, fair value is $53.47.  Using both independent variables, a more complete way of looking at the data, fair value is $52.04.  Oil prices have based and are now working higher, bolstered by tensions with Iran.  The re-emergence of the summer season inventory pattern is also supportive for oil prices.