[Posted: 9:30 AM EDT] Today we kick off central bank week.  The BOE, BOJ and Fed all meet this week.  The last meeting is probably of least consequence.  Here is what we are watching:

BOJ: The BOJ has clearly spooked the market; the Japanese central bank’s current policy is to fix the 10-year JGB interest rate at 0% and buy all the bonds required to fix the rate.  This practice has generally put the rate around 5 bps.  Now, the BOJ is considering adjusting that policy and fears of policy tightening have lifted yields and forced the BOJ to increase market intervention to prevent yields from rising.[1] 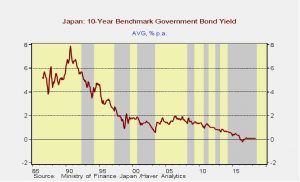 This has also led to a very flat yield curve. 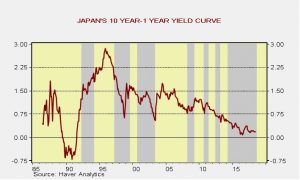 Despite all this stimulus, Japan appears no closer to reaching any sort of rising price levels. 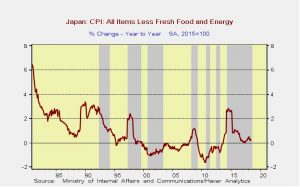 So, if forcing the long-term rate to zero isn’t generating any inflation, why is the BOJ thinking about allowing the 10-year yield to rise?  It’s probably about the yield curve.  Banking is a spread business; one borrows at the short end of the curve and lends at the long end.  The usual spread between long- and short-term rates generally represents bank margins.  Thus, the flat yield curve is hurting the banking system and the BOJ probably wants to help that sector.  The problem is that if the BOJ signals that the long rate may be allowed to rise, which will likely be seen as tightening, the JPY could appreciate.  A stronger currency will undermine Abenomics and thus the BOJ will try very hard to avoid that outcome.  We expect the BOJ to offer a tepid promise to allow some rise in the long-term interest rate but prevent too much of a rise. Consequently, the fear may overshadow what actually happens.

The Fed: No rate hike is forecast.  The only item of interest will be the statement which probably won’t tell us anything.  Nevertheless, in light of Q2 GDP, we would not be surprised to see a statement that focuses on strong growth which will bolster the argument for raising rates.  However, that is mostly to confirm the current expected policy path, nothing more.

BOE: We expect the BOE to raise rates 25 bps.  That move is well discounted but still could be modestly bullish for the GBP.

China in South America: China has been making investments in South America for some time.  Since 2000, China has been the world’s largest consumer of numerous commodity products and friendly ties would make sense since the region is a major producer.  However, a report in Sunday’s NYT[2] caught our attention; China has built a space station in Argentina that could be for dual use.  In other words, the facility could have military applications.  This facility is a troubling development, a clear violation of the Monroe Doctrine.  The article notes that U.S. interest in the region has been waning for some time, and China is moving to fill the void in what is essentially America’s backyard.

Russia dumps Treasuries: Despite the controversial meeting between President Trump and President Putin, which has raised fears in some quarters of a risky thaw in relations, Russia isn’t acting as if it believes conditions will improve.  Reports over the weekend indicate that Russia has sold nearly all of its Treasuries held in its official foreign reserves.[3]  This is an unusual move and would normally only be made if a nation wanted to diversify into some other reserve currency, e.g., euros.  However, there isn’t much evidence that any such action occurred.  It has been noted that Cayman Island holdings rose by over $20 bn in the past two months, which may suggest some Russians are trying to hide the assets.  Clearly, the move didn’t move yields.

A government shutdown?  President Trump indicated he would be willing to shut down the government if Congress fails to fund his border wall.[4]  So far, the financial markets are not taking the threat seriously.  It would be politically risky to shut down the government just before mid-terms; if the GOP were blamed, it could cost them votes.  In addition, the distraction could prevent Brett Kavanaugh from being confirmed in this term.  The market take, so far, is that this is bluster but if the president is serious the usual market pattern would be risk-off.

Iranian sanctions loom: Iran will face new sanctions on August 7, with the final phase being implemented in early November.  The Iranian rial plunged,[5] falling to 111,500 rials/USD on the open market, a new record low.  The Iranian currency has lost over half its value since April.  There have been reports of scattered unrest as the economy stumbles.  This week’s WGR will kick off a three-part report on Iran’s potential responses to sanctions.  The first part will be published later today.

An interesting political development: The Koch brothers have been important funders of the GOP in recent years.  They are demonized on the left in a similar fashion to George Soros being lambasted from the right.  However, we believe it is naïve to view the Kochs or Soros purely through the perspective of party.  The Kochs are mostly right-wing establishment with some libertarian leanings; Soros is left-wing establishment with similar market-friendly positions.  Over the weekend, Charles Koch shocked the political world by suggesting he would work with Democrats who share some of his policy goals.[6]  The reaction was swift; Steve Bannon essentially told the Kochs to pipe down and fund the president’s favored candidates.[7]  We believe the proper way to view this “spat” is through the lens of our recent WGRs on class and identity in politics.[8]  Soros and the Kochs are establishment in terms of class.  The Kochs apparent defection likely stems from their perception that the GOP is being taken over by right-wing populists who will support policies that eventually harm capital (e.g., trade impediments, restrictions on foreign investment, immigration restrictions).   That doesn’t mean the Democrats will now become the party of the establishment class; after all, the Democrats are facing their own internal revolt between the left-wing establishment and left-wing populists.  What this does show is that the party affiliations are becoming increasingly fluid as we are going through a significant restructuring of the U.S. political system.  The Kochs opening up to the idea that Democrats may be friendlier to their interests is an element of this restructuring.