[Posted: 9:30 AM EDT] The BOJ disappointed the financial markets.  Expectations for a larger stimulus package, maybe even helicopter money, was hoped for.  Instead, the BOJ offered to boost ETF purchases and indicated it will perform a study of its stimulus programs, hinting perhaps that more could come later this year.  But, there is a growing fear that the BOJ may have exhausted all of its options.  After all, NIRP hasn’t worked very well and given the absorption of bonds that QE is already doing, some portion of fiscal spending will be bought by the BOJ anyway.  As expected, the JPY rallied but, surprisingly, Japanese equities rallied too.  This unexpected improvement in stocks might be due to the expansion of ETF buying.  Still, one day doesn’t make a trend and we will be watching to see if Japan’s equities hold up.

The U.S. presidential season is officially underway now that the two conventions are over, although many political analysts argue that most voters don’t really think about elections until after Labor Day.  We have discussed this issue at length over the past few months and will be analyzing it in the coming months as well.  Our take on this election hasn’t changed.  We believe there have only been a handful of important presidential elections since 1792; this one could be one of those inflection point events.  Hillary Clinton, despite her historical breaking of the gender barrier, is the continuity candidate.  She ran her primary campaign using the playbook of a sitting vice-president and is leaning heavily on President Obama’s legacy.  Donald Trump is running as a candidate of change.   The most important change he is signaling is either an end to, or a massive adjustment of, America’s superpower role.  There is a growing segment of the American public that is tiring of the costs of this role.  They are unhappy with the constant wars and the unending foreign competition from globalization.  Sanders represents this trend as well.  To a great extent, this election is shaping up to be a referendum on the superpower role.  If Trump were to win, the global impact would be massive.  Our current expectation is that Clinton will win.  Trump is a mercurial candidate that is capable of unforced errors and thus could make a fatal error at any time.  Clinton may not be flashy, but she is disciplined and won’t go off message.  Any mistakes she makes will be ones where she is blinded by her membership in the political establishment.  Her VP selection and her giving Mayor Bloomberg a prime time speaking slot shows this tone deafness.  Kaine, while giving us no doubt he is a solid citizen, does nothing to sway the Sanders voters and Bloomberg, although able to attract GOP establishment voters, is a paragon of Wall Street, an anathema to the Sanders and Warren supporters.  The uncertainty surrounding this election should act as a damper for risk assets in the coming months.

The GDP data, as shown below, was less than impressive.  Another number that worries us as well is the drop in home ownership. 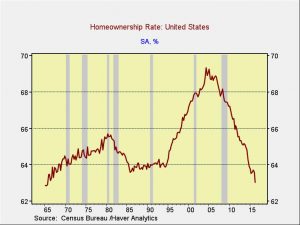 This chart shows the most recent data on the percentage of households that own or have a mortgage on their homes.  It is at its lowest level since the mid-1960s.  Our position has been that housing would not heal until home ownership fell to sustainable levels, which we assumed would be between 64% and 65%.  We did not expect a decline to 63% and with few signs of stabilizing.  If this doesn’t turn soon, it suggests that, at best, growth remains sluggish.