[Posted: 9:30 AM EDT] The FOMC statement was generally as expected.   The committee acknowledged the economy improved from their last meeting.  Labor markets are better and household spending is robust.  On the other hand, business investment remains sluggish.  Overall, the FOMC indicates that “near-term risks to the economic outlook have diminished.”  Yet, the language suggesting that policymakers are in no rush to raise rates remains in place.  The statement, for example, did not signal that risks to the economy were “nearly balanced” as some feared.  KC Fed President George dissented, resuming her lonely assault on policy stability.  But, overall, there were few surprises.   We would view the statement as consistent with an outside chance of one hike this year, and more likely, no rate adjustments until 2017.  Simply put, if the Fed wanted to prepare the markets for a rate hike, this statement failed in the goal, leading us to conclude that was not their aim.

Market action would suggest that the financial markets were primed for a more hawkish stance from the FOMC.  In the hours after the statement, the dollar has weakened significantly and long-duration Treasuries rallied.  Although STL Fed President Bullard has been roundly criticized for his regime model of monetary policy, the actual behavior of the Fed is very consistent with his model.  He has faced criticism because his theory implies that policymakers are anticipatory except when regimes change; at that point, monetary policy would shift to a new focus (e.g., from controlling inflation to stabilizing the financial system) which would require a period of adjustment where the Fed would be behind the curve until the new regime is implemented.  This is an unpopular view of policy; the preferred view is one where the focus of policy never changes.  However, if one actually looks at how policy is conducted, it does pass through periods of goal adjustments, or regimes.  The reason this is unpopular is that it adds another layer of risk to the financial markets.  If, for example, the Fed switched to a regime of getting to 8% annual M2 growth instead of targeting inflation, interest rate volatility could soar.  And yet, this was exactly Volcker’s monetary policy regime.

The BOJ decision is expected tomorrow.  As we noted yesterday, PM Abe unveiled a ¥28 trillion fiscal package that included new spending and loan guarantees.  The latter isn’t all that important because money is nearly free in Japan and so a project that needs a guarantee might be difficult to do anyway.  The focus, then, is on how much new spending is included.  Bloomberg reports today that it’s about a quarter of the total package, or ¥7 trillion.   The unknown is the time frame for that spending.  If it is spread out over several years, the immediate impact is less.  From the BOJ tomorrow, we would not expect an announcement of helicopter money but would expect an expansion of QE.

Meanwhile, in Europe, EU Commission President Juncker appointed Michel Barnier to negotiate Britain’s exit from the EU.  This appointment raised alarm in London; Barnier is considered anti-finance.  He has supported regulatory measure, which has been unpopular in London, including broker bonus caps.  Quotes surrounding his appointment include “I can’t see how it could be worse” and “It’s incredibly provocative.  This is Juncker’s revenge on Britain”.  We still believe that Chancellor Merkel is the ultimate decision maker on Brexit and initial meetings between the German leader and PM May appeared cordial.  But the French are taking a hard line, in part to scare off the Le Pen’s National Front party, and are likely behind Barnier’s appointment.  This decision could make things worse in terms of Brexit.

Inventory levels have been running below seasonal norms although the divergence has been narrowing.  It narrowed significantly this week.  We are in a period of the year where crude oil stockpiles tend fall at an increasing pace; in fact, in August, declines slow markedly.  We note this week that refinery utilization fell 0.8%.  Given the overhang in gasoline inventories, which rose 0.5 mb compared to expectations of a 0.2 mb rise, further declines in refinery utilization could lead to additional increases in oil stockpiles. 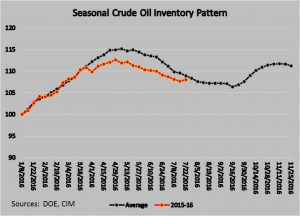 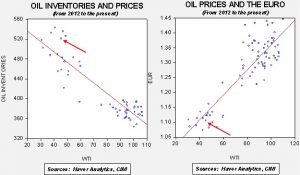 Based on inventories alone, oil prices are profoundly overvalued with the fair value price of $35.99.  Meanwhile, the EUR/WTI model generates a fair value of $45.92.  Together (which is a more sound methodology), fair value is $40.34, meaning that current prices are a bit rich although valuations are improving.