[Posted: 9:30 AM EDT] Good Wednesday morning!  It’s Fed day.  Other than that, we continue to see the major U.S. equity indices quietly make new highs.  Good earnings and nothing earthshattering coming from Washington are playing a role in lifting equity values.  Here are the news items of interest today.

Fed day: There are two factors to watch for in today’s statement.  First, although we don’t expect the FOMC to actually begin balance sheet contraction today, we do expect them to signal strongly that it will begin in September.  Our take on balance sheet adjustment is that the doves on the committee are selling the hawks on the idea that reduction is tightening.  In reality, it shouldn’t be the case as most of the balance sheet sat innocently on commercial bank balance sheets as excess reserves.  Thus, reducing those reserves a bit probably shouldn’t affect the economy significantly.  Therefore, if Chair Yellen can convince the hawks that balance sheet reduction is tightening, it should lead to fewer rate hikes.  The problem for Yellen is the possibility that balance sheet cuts will actually act as a tightening by undermining investor confidence.  We don’t think this will be the outcome, but it is possible.  Second, we will be watching for comments surrounding inflation.  The FOMC has continually suggested that the weakness in inflation has been due to a succession of one-off events.  We suspect this simply isn’t the case; deregulation, globalization and the subsequent suppression of labor costs are keeping inflation down.  What isn’t part of this equation is monetary policy.  Really, since probably the early 1990s, monetary factors have become mostly irrelevant to inflation (but not to asset prices).  Unfortunately for the Fed, they have a mandate for inflation and probably have no tools to achieve that mandate, at least not under current conditions.  Thus, if they admit that inflation remains low and perhaps for structural reasons, it begs the question as to why raise rates at all?  The best answer is to prevent “irrational exuberance” in the asset markets.  But, that means the Fed would be targeting equity values as policy, a “third rail” in the Fed’s relations with Congress.  To recap—we look for no rate change and no balance sheet reductions, but signaling for reductions to commence in September.

Trump ♥ Yellen?  It has been widely expected that the president is planning to replace Chair Yellen in February, with Gary Cohn as the lead candidate.  That is probably still the most likely outcome.  However, Trump is, at heart, a soft money guy…he wants low rates and easy credit conditions.  That is, by the way, a common position with presidents.  Establishment Republicans represent the creditor class; they are hard money types.  Thus, when one hears “rules-based policy,” that really means, “higher interest rates, tight money.”  After all, for a creditor, easy money is an anathema.  As a lender, I would get paid back in less valuable dollars.  There may be one of two things going on here.  First, Trump may be leaning toward replacing Priebus with Cohn, meaning that he may decide his next best alternative is Yellen.  Second, Trump wants a soft money Cohn and is beginning the signaling process to let Cohn know that if he wants the chair job, he needs to be a soft money guy.  Otherwise, he will stay with who he has now, a dove.

North Korea and ICBM: The WP[1] is reporting that North Korea could cross the ICBM threshold as early as next year, two years sooner than earlier estimates.  There are still two hurdles North Korea faces to directly threaten the U.S.  First, it must manage to build a warhead capable of reentry.  The stresses of leaving space and entering the atmosphere are formidable but there are clear indications that the country is working on it.  Second, North Korea hasn’t proven it has built a miniaturized bomb that can be put on a missile.  So far, all we have seen from the Hermit Kingdom are nuclear devices, which are essentially lab experiments.  A missile-deliverable bomb may still take a while to achieve.  But, it is clear that the U.S. is not saying anything to deter North Korea from its path toward directly threatening the U.S.

Macron mediates peace in Libya: Libya’s two main rival leaders, Fayez al-Sarraj and Khalifa Haftar, have agreed to a ceasefire and promised to hold elections next year.  The former is the UN-backed PM of the official government of Libya, while the latter is a military leader that controls much of the eastern part of the country.  This action is important on a number of levels.  First, peace coming to Libya would be a bearish factor for oil as we would expect Libyan oil production to recover. 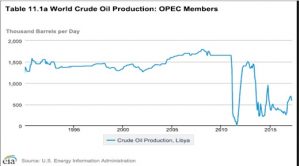 Libyan production could reach its pre-crisis levels of 1.5 mbpd.  Most recent production estimates are around 0.8 mbpd, so the additional oil would be difficult for the market to absorb.  There are still issues to be resolved.  Al-Sarraj is the UN-selected PM but has little power.  Militias control much of western Libya’s oil and may not be impressed with this deal.  Second, peace in Libya might reduce the flow of refugees into Europe, which would be supportive for the European economy (at least in the short run).  Italy is a bit miffed that Macron has acted as mediator.  Libya was an Italian colony and it still believes it should have the most European influence in the country.  Macron is showing, again, that he is a disruptive actor in Europe.

The EU acts against Poland: The EU is opening an investigation into Polish legislation that would change the court system.  We doubt this will stop the ruling party in Poland from moving forward on this legislation but Poland could find itself increasingly isolated from the EU.  In the end, after Brexit, that might not matter much.

Dovish talk from the Reserve Bank of Australia (RBA): The RBA Governor Lowe indicated today that, due to low inflation, he remains “comfortable” with low policy rates.  The AUD has been strengthening recently on expectations of better growth, but continued low inflation readings will likely keep the RBA from raising rates in the near term.  We do view the AUD as undervalued and would not expect the RBA statements to lead to a reversal in recent trends.

Iran vs. U.S.: The U.S.S. Thunderbolt fired two bursts of machine-gun fire at an Iranian naval vessel that approached at a very fast pace.  The Iranian warship came within 150 yards of the U.S. ship before the American vessel opened fire.  According to reports, these provocative acts have been increasing recently.  We suspect the Iranians (and, for that matter, the Russians and the Chinese as well) are testing the new U.S. administration for its reaction to these provocations.