[Posted: 9:30 AM EDT] The FOMC meeting begins today and concludes tomorrow.  As we noted yesterday, we expect the Fed to try to inject expectations of potential tightening.  We also expect the FOMC to fail on this goal.  The financial markets are quite sure the Fed won’t move until next year.  We note that the NYT has a feature article on Governor Brainard, one of the most dovish members of the FOMC.  The article discusses her Democratic Party leanings (she has donated $2,700 to the Clinton campaign, the largest donation an individual can make) and her focus on global economic conditions in setting U.S. monetary policy.  The Fed’s mandate from Congress is to focus on the U.S. economy.  However, given the U.S. superpower role, the singular focus on the domestic economy is probably inappropriate.  For better or worse, the U.S. is the world’s central bank.  Given global conditions, the Fed should remain on the sidelines.

We are seeing the JPY much stronger this morning after the Japanese media reported that PM Abe is likely to propose a ¥6 trillion fiscal package, well below the ¥20 trillion suggested earlier this week.  However, it should be noted that the higher numbers were somewhat overstated in that many were simply loan guarantees.  Since Japan has negative sovereign rates, loan guarantees are rather silly.  The proposal being discussed today appears to be real spending over a two-year time frame.  Although this spending is not small, the reaction from financial markets is a clear signal that more is required to “move the needle.”

On Friday, the first look at Q2 GDP will be released.  We do note that there will be benchmark revisions to the data which could affect how the numbers come in relative to expectations.  The latest data from the Atlanta FRB showed the following: 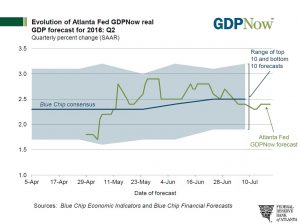 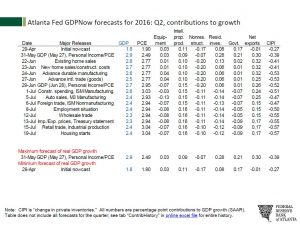 The above table shows contributions to the overall growth number.  The data suggest that household consumption is the source of nearly all growth in the economy, adding just over 3%.  The biggest drag on growth is inventory reduction, which is peeling nearly 60 bps off of growth (CIPI on the above table).  That is something of a “bad news/good news” situation as inventory rebuilding will tend to support growth in future quarters.  Net exports added modestly, although if one observes the trends in the data, the contribution from net exports fell as consumption improved over the quarter.  This is consistent with theory; as consumption rises, some growth is lost to foreigners.  It is also disconcerting that the government sector remains a drag on the economy, a persistent problem in this recovery and expansion. 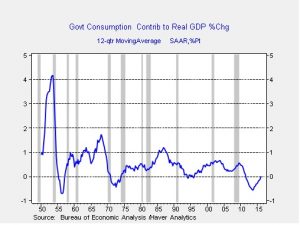 This chart shows the three-year average of the contribution to GDP growth coming from government.  Since 1950, the trend contribution from government tends to run between 50 to 100 bps.  There were three periods prior to the current one when the government contribution was negative.  All three of these periods occurred during post-war demobilizations.  The current weakness, occurring during wars in Iraq and Afghanistan, suggests that other spending on infrastructure, education, etc. has been severely constrained.  It is important to note that only spending on goods and services by the government affects GDP directly in the GDP data.  Transfer payments, such as Social Security, Medicare, etc., are not counted as government consumption.  That spending shows up in consumption as households spend these transfers.

Both candidates for president are promising higher fiscal spending.  Although we have serious concerns about the potential return on investment (nicer airports and more roads probably won’t boost productivity), at least the spending will lift GDP growth.  Overall, we would expect the proposed fiscal policy boosts to lift growth by 50 to 100 bps most quarters.

So, overall, we are looking for a recovery in the data on Friday.  The revisions do add an element of uncertainty to the data.  However, we feel safe in saying that the data will be an improvement over Q1.