Good morning!   The big news today is the ECB.  Although the central bank for the Eurozone did not cut rates as hoped, the narrative of the statement was dovish.  However, the press conference dampened the bullish enthusiasm.  Here is what we are watching:

The ECB: Financial markets were leaning toward a rate cut from the ECB this morning.  That didn’t happen, but the narrative of the decision indicated that the bank is examining a number of options beyond a mere rate reduction, which may include long-term forward guidance (no rate hikes for years) and the potential for expanded QE (other assets beyond sovereign debt.)  In the press conference, it became clear there is dissention among the members of the ECB on the path forward.  ECB President Draghi admitted there wasn’t a unanimous path to new stimulus and this may have delayed the rate cut.  Financial markets reacted to the statement in a bullish fashion; interest rates fell, the EUR declined and equities rallied.  The press conference, especially the apparent divisions within the ECB, tempered the bullishness.  It appears to us that the ECB will likely not just lower rates but also add other measures; however, the second part might not be as aggressive as financial markets had hoped.

Germany in recession?  Recent data from Germany has been quite weak.  Today’s IFO business climate data looks very weak and may be heading into a downturn. 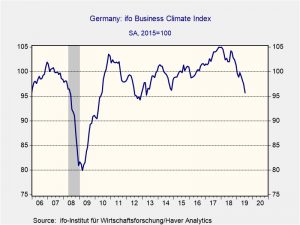 Despite the slowdown, Germany remains steadfastly against fiscal stimulus.  This somewhat irrational reluctance to lift spending or cut taxes almost requires that Germany take aggregate demand from the rest of the world via exports.

Enter Boris: Boris Johnson officially took control of the British government with a bang, firing 17 ministers and high-ranking officials, replacing them with hardline Brexit supporters.  In his first speech as PM, outside his new residence at 10 Downing Street, he made it clear that, one way or another, the U.K. will be out of the EU by Halloween.

When the EU began negotiations with the U.K. over its exit, the former had one of two paths it could take.  The first was to take a soft line to avoid the disruption that the British exit would have on both the EU and U.K. economies.  Although the British were at greater risk from leaving, the EU would be harmed as well.  The other path was to take a hardline stance based on the superior position the EU had in negotiations.  This position had the benefit of sending a signal to other nations that might think about leaving (read: Italy) that divorce from the EU would be very costly.  The EU, mostly driven by France, opted for the second option.  Since PM May generally was not in favor of a hard Brexit, she eventually accepted what appears to be an unfavorable deal.

The risk of the EU’s position is precisely a Boris Johnson-type figure.  Because of the EU’s harsh stance in negotiations, there was always a chance of a nationalist reaction from Britain.  Although British voters remain profoundly divided, and if another referendum were held it is quite possible the initial outcome could be reversed, it was naïve on the part of the EU to not expect a nationalist reaction to the perceived humiliation.  The EU’s stance is understandable; it feared that if the U.K. got a “good” deal, others might be tempted to follow its path.  However, that doesn’t mean the hardline position was without its own costs.

We don’t expect the EU to blink under the threat of a hard Brexit.  The costs to Britain will be high and its exit timing is particularly bad.   It is still not clear that Johnson can get a no-deal Brexit through Parliament; he may need to risk new elections.  A hard Brexit will be very difficult for Ireland, and Scotland may decide it should leave the U.K. and rejoin the EU.  Simply put, this could get messy and, sadly, it appears the odds of bad outcomes are rising.  And so, Halloween awaits…

United Kingdom-Australia: In a development that will likely encourage the new U.K. government, Australian Prime Minister Scott Morrison said London and Canberra could seal a free-trade deal “within weeks” of Brexit.  British and Australian officials have been informally discussing a trade deal for almost two years, but they can’t proceed to formal negotiations until the U.K. is no longer a member of the EU.

North Korea: The South Korean military says North Korea fired two short-range missiles into the Sea of Japan this morning.  The missiles, which appeared to be a new type, reached an altitude of some 30 miles and flew some 270 miles and 430 miles, respectively.  North Korea is also hinting it may resume nuclear testing.  Separately, North Korean Foreign Minister Ri Yong Ho canceled a trip to Thailand in which he had been expected to meet U.S. Secretary of State Mike Pompeo.  The missile launch and meeting cancellation were probably meant as a reminder that North Korea could revert to its previous provocative military moves if there isn’t faster progress on the U.S.-North Korea denuclearization talks.

Greenspan approves: Former Fed Chair Greenspan supports a rate cut due to weak overseas economic activity, suggesting this is what he did in 1998.  Although there is little doubt of a rate cut next week, the Greenspan approval makes the move a near-certainty.

A side effect from the Japan/South Korea spat: The current dispute between Japan and South Korea, which at its heart is mostly about the issue of reparations and Japan’s colonization of the Korean Peninsula in the years before WWII, is affecting supply chains for tech firms.  This is additional evidence that the steady erosion of U.S. hegemony is having an effect on globalization in ways beyond the mere securing of sea lanes.

France: An unusual heat wave is spreading across Europe this week, worsening a years-long drought, cutting crop yields and forcing governments to enact draconian conservation measures.  France has been especially hard hit, with a record-high temperature of 105 degrees Fahrenheit expected today.  The extreme heat is even generating new risks that the fire-damaged Notre Dame cathedral could collapse.  The architect overseeing its repair warned yesterday that the physical forces are becoming more unbalanced as the remaining portions of the wooden roof are still waterlogged from the firefighters’ hoses but the heat is drying out the limestone walls too quickly.

Turkey: As feared when President Erdogan sacked the former central bank governor in early July, the Central Bank of Turkey today slashed its benchmark short-term interest rate to 19.75% from its previous setting of 24.00%.  As justification, the new governor and his policy committee said weakening global economic activity has led to “heightened downside risks to inflation.”  In reality, however, President Erdogan has been pushing the institution to cut rates even in the midst of continuing high inflation and a weak lira.  The lira has strengthened today, but that may simply reflect that investors had already priced in a major cut and now hope for some stability from the central bank.

Brazil: In an unusual effort to spur the economy, President Bolsonaro said his government will allow workers to take up to 500 reais from their individual unemployment accounts, which Brazilian law requires them to keep.  Such one-off “gifts” are often ineffective in producing lasting economic benefits, but they could boost confidence and growth in the very short term.

This is the seasonal pattern chart for commercial crude oil inventories.  We are now well within the spring/summer withdrawal season.  This week’s decline is consistent with the seasonal pattern in terms of direction but was larger than normal.  In fact, the current level is below the usual seasonal trough that occurs in September.  We would not be surprised to see a bounce in inventories next week as the effects of Hurricane Barry dissipate.

Based on oil inventories alone, fair value for crude oil is $59.48.   Based on the EUR, fair value is $52.31.  Using both independent variables, a more complete way of looking at the data, fair value is $54.04.  This week’s sharp drop in stockpiles has boosted the fair values for oil alone and for the combined model, while the euro model’s fair value fell slightly.  Worries about global growth are putting some bearish pressure on oil prices.  Reports that Saudi Arabia and Kuwait have come to an agreement on production from the Neutral Zone, an area claimed by both nations, pushed oil prices lower late yesterday.

In terms of geopolitics, Iran is suggesting it might consider a swap of tankers with the U.K.  It is not clear if the U.K. will agree to this because it creates a precedent of “tit-for-tat” that might be destabilizing.  The U.S. said yesterday it would escort U.S. ships in the Persian Gulf seen as facing threats from Iran.  We note that the U.S. and Europe have competing plans on protecting Gulf shipping; we suspect the U.S. plan will eventually win out.  At this point, however, the markets have not built in any significant geopolitical risk.  This is something of a surprise since tensions remain elevated and thus oil prices could jump significantly if an event occurs.