[Posted: 9:30 AM EDT] The JPY rose strongly overnight after media reports quoted BOJ Governor Kuroda as saying that helicopter money was not being considered and would never be implemented.  This comment came as a surprise as the financial markets have been steadily discounting some sort of action from the Japanese central bank.  We have seen the JPY retreat after it was discovered that the comments are about a month old.  Still, there are reports carried by both Reuters and Bloomberg raising concerns from BOJ officials that the BOJ may be reaching the point where its unconventional policies are no longer able to boost growth.  The BOJ holds its official meeting on July 29.

On the fiscal side, Japan’s PM Abe is hinting at a ¥20 trillion ($108 bn) package, which is massive.  However, the actual fiscal thrust could be much less, closer to ¥3 trillion ($28 bn).  How does this work?  Much of the package isn’t direct spending but special loans offered to the private sector for special projects.  Given that the Japanese financial system has ample liquidity, it isn’t obvious that these loans are even necessary.  It should be noted that many of these projects are multi-year in nature, which dilutes the impact in the short run.

We still believe that direct financing of fiscal spending will eventually occur and will most likely occur in Japan first.  However, it may not happen this summer.  If Abe and Kuroda disappoint, the recent rally seen in Japanese equities and the weakness in the JPY may not be sustained.

ECB President Mario Draghi is holding his press conference after the bank made no changes to policy.  The markets initially took the bank’s action as modestly hawkish as the EUR rallied before and early on Draghi’s comments.  Draghi has hinted that a stimulus boost might be considered in September.  This comment reversed gains in the EUR, leaving it unchanged as the U.S. equity markets open.

The GOP is holding its convention.  Unlike conventions in recent years, this one is clearly not tightly managed.  Although the chattering classes are uncomfortable with the surprises and the lack of control, we suspect this issue isn’t a big deal for the public.  In fact, the lack of a followed script makes it more interesting to watch and may be boosting ratings.  After all, we don’t expect any surprises when the other party meets so there is little reason to watch.  In today’s NYT, Donald Trump suggested that, under his administration, the U.S. may not move automatically on an Article 5 event, the part that says that an attack on one member is considered an attack on all.  It is known as the “collective security” article.  In NATO’s own documents, it is considered a “cornerstone of the Alliance.”[1]  Instead, Trump suggested that U.S. support may be contingent on how much a member contributes to NATO defense.  In other words, he is offering a warning that “free riding” the U.S. may be very costly.

If this stance were to become the policy of the next government, it would raise significant fears among NATO members.  After all, an important part of Europe’s recovery from WWII was the ability to steer away from defense spending toward social spending because the former became less important due to U.S. defense spending.  Trump is signaling that the behavior of the superpower will change significantly if he becomes president.  We would note that this position would probably be endorsed by Sen. Sanders if he did not know the author of the statement.

The U.S. crude oil inventories fell a bit more than forecast, dipping 2.3 mb versus estimates of a 1.3 mb decline.

This chart shows current crude oil inventories, both over the long term and the last decade.  We are starting to see inventories decline, but normal levels would be below 400 mb, some 130 mb lower than now.

Inventories remain elevated.  Inventories have been lagging the usual seasonal pattern.  We are in a period of the year when crude oil stockpiles tend to fall at an increasing pace.  The pace of declines will slow in the coming weeks as we are halfway through the summer driving season. 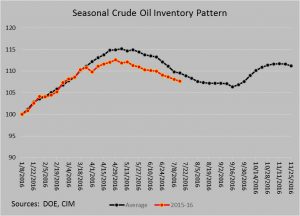 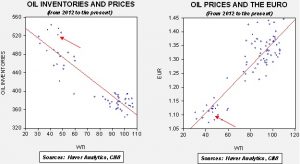 Based on inventories alone, oil prices are profoundly overvalued, with a fair value price of $36.62.  Meanwhile, the EUR/WTI model generates a fair value of $46.33.  Together (which is a more sound methodology), fair value is $40.85, meaning that current prices are a bit rich.