Global markets are trading quietly this morning, consistent with mid-summer.  Here is what we are watching today:

The EU vote:  Well, she won, but it was close.  Ursula von der Leyen received 383 votes, marginally more than the 374 she needed to win.  She will be the first German to hold this post since 1958.  Although the vote is anonymous, it does appear she had some backing of British MEPs, which means she may not have a working majority once Brexit occurs.  This outcome will likely create a weak EU Commission President which will likely be quietly preferred across the EU’s capitals.  In Germany, because Leyen resigned from her post as defense minister, the CDU leaker AKK will take over the position.  The pattern of the vote shows the dwindling power of the center-left and center-right and the rising power of single issue parties (e.g., Greens) and the extremes of the left-wing and right-wing.

In related news, The European Union’s competition commission has launched a formal investigation into whether Amazon (AMZN, 2,009.90) is competing unfairly against the third-party sellers using its website.  The investigation arises from Amazon’s dual role providing a marketplace for those sellers and also selling its own products in competition with them.  At issue is whether Amazon is unfairly using data collected from those third-party sellers in order to out-sell them.  The inquiry illustrates how data rights and data ownership have become so important to consumers and businesses alike.  It also broadens the EU’s scrutiny of big, dominant technology firms based largely in the United States, which is sure to draw the ire of President Trump and worsen U.S.-EU tensions.

Iran:  Yesterday, oil prices plunged on reports that the U.S. and Iran might be open to negotiations.  However, this news comes in the midst of increasing tensions.  Contact with a UAE oil tanker has been lost in the Strait of Hormuz and it is possible that Iran has seized the vessel.  Iran claims it “aided” the ship but that has not been confirmed by outside sources.  Meanwhile, the tone coming out of Iranian leadership remains hostile.   What we may be seeing is a recalibration by the U.S.  It is possible the Trump administration thought Iran would capitulate quickly to a return of sanctions and make a new agreement, one that would preclude ever making a nuclear weapon.  Now that Iran has shown it won’t back down, a case could be made that the U.S. and its allies are not taking the Iranian bait to escalate hostilities.  There is another possibility.  Governments around the world are “gaming” the U.S. 2020 elections.  For example, the EU is clearly stalling on trade talks, hoping for a new government to end the current trade regime.  Iran may want a new U.S. president as well but wants to achieve that by drawing the U.S. into a war that will spike oil prices and probably push the U.S. into recession.  Instead, the U.S. response is to avoid strong reactions to provocations and allow sanctions to continue to weaken the Iranian economy. In either case, Iran will likely continue to take bolder actions to eventually trigger a response.  Thus, yesterday’s decline probably overstates the degree of “thaw”.

The EU is also downplaying Iran’s behavior, going along with U.S. efforts to prevent an escalation.  And, Iran is also trying to draw Europe into a conflict.  Judicial officials confirmed that Iran has arrested a French-Iranian scholar on unspecified charges, drawing demands for information and diplomatic access by France.  Such arrests of dual citizens have sometimes led to espionage charges.  If it comes to that this time, it would be a sign that France is having little success in its efforts to keep Iran in the 2015 nuclear deal in the face of renewed U.S. sanctions.

Turkey:  President Trump has confirmed that the United States will stop any further sales of the F-35 fighter jet to Turkey, in response to Ankara’s purchase of Russia’s S-400 air defense system.  Not only does Turkey stand to lose the hefty down payment it has made for its F-35 order, but the Pentagon has also taken steps to exclude Turkish firms from supplying parts for the plane.  Since Turkey reportedly produces approximately 6% of the value of every F-35, that could be a noticeable blow to Turkish industry.

U.S.-China Trade:  In a decision that could play into the current U.S.-China trade dispute, the World Trade Organization (WTO) has issued a final ruling in a 2012 case in which China complained about U.S. import tariffs imposed in retaliation for China’s subsidizing of certain export firms.  On its face, the ruling went against the U.S. tariffs, in the sense that it said the tariffs were calculated incorrectly.  However, the ruling also confirmed that the subsidies really were giving the Chinese firms an unfair advantage, which could help harden the U.S. position in the current dispute.

Taiwan:  Han Kuo-yu, the popular mayor of Taiwan’s second-biggest city, has won the opposition Kuomintang Party’s presidential primary, beating Terry Gou, the founder of Apple (AAPL, 204.50) supplier Foxconn (2354.TW, 66.80).  The China-friendly Han, with overt and covert support from Beijing, will compete against the independence-minded incumbent, Tsai Ing-wen, next January.

A lift in GDP:  The Atlanta FRB GDPNow forecast increased to 1.6%, up 0.3%, after yesterday’s retail sales data. The 30 bps of growth came exclusively from increased consumption. 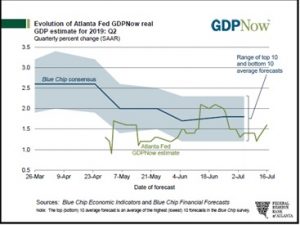 Here is the contribution table. 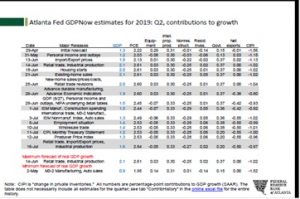 The general strength of the economy does appear to be dividing the FOMC.  Dallas FRB President Kaplan seems to be leaning to only one cut, whereas Chicago FRB President Evans seems open to more.   Although economists remain divided on the path of the economy, some prominent money managers are looking for further weakness.  In an interview with the Financial Times, celebrated hedge fund manager Kyle Bass said he believes the U.S. economy will fall into a recession by mid-2020 and the Federal Reserve will be forced to cut its benchmark fed funds interest rate all the way to zero, where it will remain for the foreseeable future.  According to Bass, “As we have all learned, once an economy falls into the tractor beam of zero rates, it’s almost impossible to escape them.”  Although Bass seems to be focusing more on a broad economic slowdown, a recent report by FTI Consulting highlighted the fact that U.S. online retail sales have slowed for four straight quarters and may continue to slow as the industry matures.

Libra:  Facebook (FB, 203.81) was on Capitol Hill yesterday to discuss its new cryptocurrency with lawmakers.  Casual observation would suggest it didn’t go well.  Democrats seemed united against the idea; the GOP was divided.  One item to consider; the unofficial motto of Silicon Valley is “move fast and break things.”  It appears that the company didn’t fully consider all the issues surrounding the impact of Libra.  The history of the financial markets show the impact of innovations that go awry and given the reach of social media, an unexpected problem could have a global impact.

A budget deal?  There are reports that House Democrats are close to an agreement with the Treasury over a two year budget deal.  Although there is still a chance that negotiations fail, this news does increase the odds that a debt ceiling crisis will be averted.

A spat between Japan and South Korea:  One of our positions is that America’s success as a hegemon was through the “freezing” of historic friction points in Europe and Asia.  Specifically, the U.S. took over the security of Europe to resolve the German problem and demilitarized Japan to eliminate the island’s fear of being cut off from natural resources.  In both cases, nations that had previously dominated their regions became docile and prevented WWIII.  Now that the U.S. is questioning the need to maintain hegemony, these previously frozen conflict zones are showing signs of thawing.  A case in point is developing between South Korea and Japan.  The Korean peninsula has been an area of contention for centuries between China and Japan.  If China controlled the area, it was only a short boat ride away from invading Japan.  If Japan controlled the peninsula, it had a foothold into further encroachment into China.

Needless to say, Koreans were never comfortable with the hegemonic designs of either China or Japan.  The U.S. forced South Korea and Japan to get along despite deep resentment of the Koreans over their treatment during Japanese occupation.  Over the years, both nations arranged to overcome latent hostility.  In 1965, both nations agreed to waive reparations.  But recently, South Korean courts have ruled that the 1965 agreement does not eliminate individual claims of reparations against Japan by individuals.  As a result, courts there have ordered the seizure of Japanese company assets.  Japan is retaliating by applying trade embargos on key technology components.  South Korea appears to be digging in for a longer fight.  The South Korean finance minister, Hong Nam-ki, said his government is working on a plan to reduce the country’s reliance on Japanese manufacturing inputs and make its own producers more independent.

A key to peace in the region has been the ability of the U.S. to force cooperation among allies.  However, as the U.S. signals withdrawal, old conflicts emerge which will divide former allies (albeit forced ones) and allow China to exploit these divisions to expand its power and undermine American influence in Asia.  An additional observation; this action adds to the growing use of protectionism and reduced globalization, which will have major implications for the global economy going forward

Odds and ends:  It appears Spain’s PM Pedro Sanchez won’t be able to form a government.  Sanchez’s Socialists won the most seats in elections last April but was 53 seats short of a majority.  He has, so far, been unable to find a coalition partner to form a majority government.  If he cannot, he will either try to govern with his current minority or call new elections.  Although Japan is known for its lack of immigration, there are signs that its rapidly aging population is leading the island nation to open up to foreigners.  The current foreign-born population in China is now 2.1% (the U.S. is around 15%).