[Posted: 9:30 AM EDT] Tonight’s midsummer classic, the All-Star Game, is really the official midpoint of summer.  Markets are quiet this morning.  Here is what we are watching:

Did the president go too far?  Criticism of President Trump’s performance at the press conference with Russian President Vladimir Putin was widespread.  Even Fox News, which is generally supportive of the White House, was remarkably critical.[1]  Our primary concern is always the impact of actions on the financial markets.  It’s too early for any reliable polling to tell us much and there was no significant movement in the prediction markets, either.  The history of populism does show that sometimes populist leaders, mostly due to inexperience, can overshoot their support.  If Trump’s approval wanes, it might not necessarily be bearish for financial markets because it may slow the trade conflict.  For now, we are treating yesterday’s Russia event as an item to watch.  However, we must say that the breadth of condemnation was rare.

Powell to the Hill: Chair Powell goes to the Senate this morning for his semiannual testimony on monetary policy.  Below we discuss a couple of charts worth noting.

First, we have updated our Mankiw model with four variations.  The Mankiw rule models attempt to determine the neutral rate for fed funds, which is a rate that is neither accommodative nor stimulative.  Mankiw’s model is a variation of the Taylor Rule.  The latter measures the neutral rate using core CPI and the difference between GDP and potential GDP, which is an estimate of slack in the economy.  Potential GDP cannot be directly observed, only estimated.  To overcome this problem, Mankiw used the unemployment rate as a proxy for economic slack.  We have created four versions of the rule, one that follows the original construction by using the unemployment rate as a measure of slack, a second using the employment/population ratio, a third using involuntary part-time workers as a percentage of the total labor force and a fourth using yearly wage growth for non-supervisory workers.

The second chart is our estimate of what the financial markets have discounted in terms of tightening.  The chart below compares the fed funds target to the implied three-month LIBOR rate, two-years deferred, which comes from the Eurodollar futures market.  Historically, the FOMC tends to tighten until the implied LIBOR rate equals the fed funds target.  In fact, when the target overshoots the implied rate, the odds of recession increase.  Currently, the implied LIBOR rate is near 3.00%, suggesting the Fed has four more hikes to go.  Clearly, the financial market’s estimate of the terminal rate is well below what the dots plot or the majority of the Mankiw rule estimates suggest for the terminal rates.  If the FOMC continues on its expected path, meaning two more hikes this year and perhaps more in 2019, the odds of recession will begin to rise. 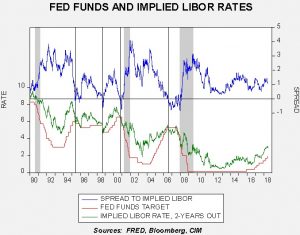 We are already hearing discordant voices from the FOMC.  Minneapolis FRB President Kashkari[2] (not a current voter) is calling for a pause, citing the rapid narrowing of the yield curve.  We don’t expect anything from Powell other than “steady as she goes,” but concerns about monetary policy will likely rise by year’s end.