[Posted: 9:30 AM EDT] Happy Monday!  The media is focused on the Trump/Putin meetings in Helsinki but financial markets are mostly ignoring the spectacle.  The biggest major market move is in oil, which we discuss below.  Here is what we are watching this morning:

China GDP: China’s Q2 GDP[1] rose 6.7% from last year, down from 6.8% in Q1.  In related news, industrial production rose 6.0% from last year compared to expectations of 6.5%.  Although China’s economy remains healthy, there is some slowing which has weighed on emerging markets. 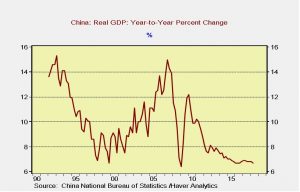 Here’s the contribution to growth: 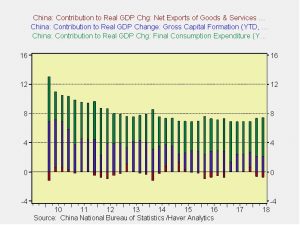 Although China continues to run a large trade surplus with the U.S., it is actually seeing negative net exports in the GDP data.  This would suggest that China has a bilateral issue with the U.S. but, unlike Germany, China’s overall dependence on exports has lessened over the years. 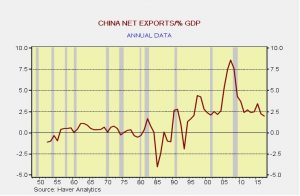 This chart shows China’s net exports as a percentage of GDP.  The data is only available on an annual basis but it would not be surprising to see this number in “the red” for 2018 given the current net exports.  China, like most successful developing nations in the postwar world, has used export promotion for development.  That explains why China’s net exports jumped above 2.5% after 1995 and reached nearly 8% in 2007.  Recent data would suggest that China is attempting to restructure its economy but the country is still dependent on the U.S. to absorb its excess output.  That’s why the trade war is a major threat to its economy.

Oil weakness: Last week’s U.S. inventory data showed a massive decline in stockpiles, putting us on a path toward high $80s for WTI by Labor Day.  But, prices are slumping this morning.  There are two reasons cited for the decline.  First, Saudi Arabia is offering additional supplies to Asia.[2]  Second, the U.S. and other Western nations are considering SPR releases if oil prices continue to rise.[3]  We suspect President Trump is worried that high gasoline prices will hurt his party’s chances in the November midterms.  Currently, gasoline prices are elevated but not yet at a level that would be considered critical. 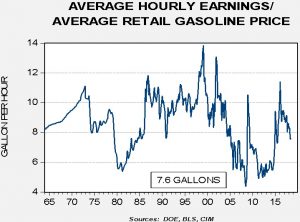 This chart shows the average hourly wage for non-supervisory workers compared to the national average for retail gasoline prices.  Currently, the average worker needs to work an hour to buy 7.6 gallons of gasoline.  The long-term average is 8.5 gallons per hour, so the price is “hurting” but it’s not at a level where it would be considered a serious problem.  As a general rule, we pay attention when this ratio dips under 7.0 gallons for each working hour.

This news offsets two potentially bullish items.  First, there was significant unrest in the Basra region of Iraq over the weekend.  The protests appear local; anger over the lack of jobs and poor public services appear to be the driving force behind the anger.  But, this region accounts for 80% of Iraq’s oil reserves and 3.2 mbpd of exports.   Despite being local in nature, we would not be surprised to see Iranian operatives try to fan the unrest in a bid to restrict Iraqi exports and lift oil prices.  Second, the U.S. refused to grant any waivers to European firms doing business in Iran.[4]  This means that sanctions will weaken Iranian oil sales.  Iran is trying to send its oil to Asia[5] but, as we noted above, Saudi Arabia is doing the same thing.

The production shortfalls in Libya and Venezuela, the sanctions on Iran and the unrest in Iraq are all bullish factors for oil prices.  Even if Saudi Arabia responds by lifting output, the risk is that OPEC is rapidly depleting its excess reserves.  This means the world is approaching the “vertical” part of the global supply curve, which can result in large price spikes.  The SPR is designed to offset such events.  However, it’s been years since the SPR was “fired in anger”; one would have to go back to the First Gulf War and, even then, the drawdown was small (and was eventually unnecessary).  The risk to using the SPR is that it doesn’t work as planned and the oil can’t be tapped as quickly as the “specs” suggest.  If that becomes evident, there is no backstop and prices could move higher.  In reality, the SPR is probably a better threat than it is a real protector against supply disruption.

Bitcoin worries: Last week, the Mueller investigation indicted a number of Russians involved in an attempt to sway the U.S. presidential election.  One little detail caught our attention.  Apparently, some of the conspirators used bitcoin to pay for their nefarious actions.  Given the anonymous nature of cryptocurrencies, we would expect a crackdown to emerge from nation states as they discover the usefulness of cryptocurrencies for illegal activities.