[Posted: 9:30 AM EDT] There were two major news items overnight, the Nice terrorist attack and China’s GDP.  News reports indicate that there were 84 deaths from a terrorist attack in Nice, France.  The attacker, identified as Mohamed Lahouaiej Bouhlel, a French passport holder of Tunisian descent, used a 19 tonne truck to drive into a crowd celebrating Bastille Day on the French Riviera.  Not too much is known about the assailant; he appears to be a petty criminal but was not on any terrorist watch lists.  There have been reports that IS has been actively recruiting criminals of Middle Eastern origin living in Europe.  These recruits are often not overtly religious but seem attracted to the violent nature of IS.[1]  Neighbors of Bouhlel report that he did not appear religious.  He was married with three children but, according to reports, his marriage was estranged.  President Hollande asked the French legislature to extend the state of emergency for three more months; it was due to expire.

Terror attacks such as these are nearly impossible to stop.  Normal reasoning would look for patterns, trying to create a profile that might inform when the next attack may be coming.  However, that doesn’t seem to work; after all, if small-time criminals can suddenly turn into terrorists, there is no clear way to figure out the difference.  The longer this goes on the more likely it is that the public will demand protection, which may mean that anyone with a certain religious background with a criminal record will come under increased scrutiny and surveillance, at a minimum.  The increase in fear will almost certainly have a political effect; we will be watching closely to see if Le Pen’s National Front poll numbers improve in the coming weeks.  On the other hand, the financial markets have become so inured to these events that there is scant evidence of an effect on todays’ trade.

China’s Q2 GDP rose 6.7% from last year, a bit better than the 6.6% expected.  The data is (not surprisingly) in line with government growth targets.  The rise in credit has lifted GDP at the risk of increasing non-performing loans in the future.

This chart shows that private investment continues to fall; essentially, the government was able to meet its goals by boosting public investment.  Property investment is up 6.1% YTD compared to the same period last year.  It is unclear if another rise in real estate activity is a good long-term plan.  The good news of the data is that the Chinese economy isn’t in imminent danger.  The bad news is that it is likely creating future debt problems that could be serious in order to avoid problems now.

With the release of CPI data, we can tentatively update our versions of the Mankiw rule model.  This model attempts to determine the neutral rate for fed funds, which is a rate that is neither accommodative nor stimulative.  Mankiw’s model is a variation of the Taylor Rule.  The latter measures the neutral rate using core CPI and the difference between GDP and potential GDP, which is an estimate of slack in the economy.  Potential GDP cannot be directly observed, only estimated.  To overcome this problem with potential GDP, Mankiw used the unemployment rate as a proxy for economic slack.  We have created three versions of the rule, one that follows the original construction by using the unemployment rate as a measure of slack, a second that uses the employment/population ratio and a third using involuntary part-time workers as a percentage of the total labor force. 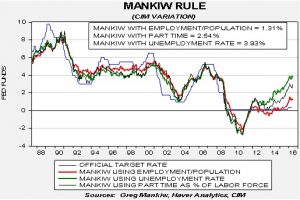 Using the unemployment rate, the neutral rate is now up to 3.93%, suggesting the FOMC is well behind the curve.  Using the employment/population ratio, the neutral rate is 1.31%, indicating that, even using the most dovish variation, the FOMC needs a rate hike of at least 75 to 100 bps to achieve neutral policy.  Finally, using involuntary part-time employment, the neutral rate is 2.54%.  Currently, fed funds futures place the odds of a September hike at 21%.  A probability in excess of 50% isn’t seen until June 2017.  We had three Fed speakers yesterday; none suggested a rate was required in the near term.  With the immediate impact of Brexit mostly out of the way and no policy tightening on the horizon, there is clear evidence of improving investor confidence.  The next two events of consequence are the Italian referendum on government reform in October and the November U.S. elections.  In the wake of Brexit, we would expect EU officials to give some ground to Italy; we note that the new head of Italy’s largest bank, UniCredit (UCG, €2.18), called for a “more lenient stance” on bank support from the EU.  Although the risk of a President Trump is, in our opinion, probably higher than polls suggest, it is still nothing more than a coin flip.  Essentially, the biggest risk we identified in our 2016 outlook, a policy mistake by the FOMC, is becoming less likely, at least in terms of tightening too much and too often.  On the other hand, we may be facing the other risk, which is that stable policy triggers financial market exuberance.