[Posted: 9:30 AM EDT] Equities are higher this morning on expectations of continued support from policy stimulus.  Although the BOE disappointed (see below), the BOJ looks like it is moving steadily toward direct BOJ financing of fiscal spending, otherwise known as helicopter money.  Japan remains mired in near-deflationary conditions and the JPY has been strengthening lately.  This rise has been exacerbated by a stealth depreciation of the CNY, making Japan’s exports less competitive compared to a key competitor in Asia. 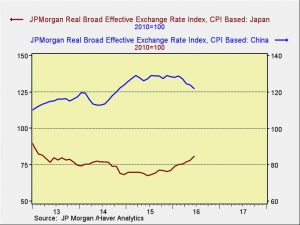 This chart shows the JPM real effective exchange rates of China and Japan.  For most of this year, Japan’s exchange rate has been strengthening while China’s has been weakening.  Japan will not tolerate this situation indefinitely.  For some perspective, note the chart below. 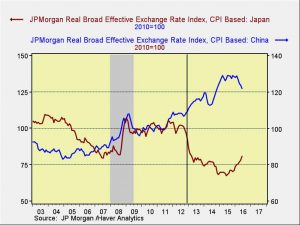 The vertical line shows Abe’s election win in late 2012.  Note how the general trend has been for the JPY to weaken and the CNY to appreciate.  This year has seen a reversal in that trend and we suspect that the Abe government wants to push back against this year’s exchange trends.  As we have noted before, one of the primary effects of helicopter money is a sharp depreciation in the exchange rate.  If China reacts against this, the exporting of deflation to world markets will accelerate.

The BOE surprised the markets to some extent by keeping policy steady.  There were general expectations for a cut.  The vote was 8-1, with the dissenter calling for a cut of 25 bps.  The BOE did indicate that a cut in August is possible but, given the uncertainty surrounding the May government and Brexit, in general, the BOE decided to wait before acting.  The GBP rose sharply on the news.

This is the intraday chart on the £/$ exchange rate in USD per GBP.  The pound jumped on the news of no change in rates.

The U.S. crude oil inventories fell a bit more than forecast, dipping 2.6 mb versus estimates of a 2.3 mb decline.

This chart shows current crude oil inventories, both over the long term and the last decade.  We are starting to see inventories decline, but normal levels would be below 400 mb, some 130 mb lower than now.

So, obviously, inventories remain elevated.  Inventories have been lagging the usual seasonal pattern.  We are in a period of the year when crude oil stockpiles tend to fall at an increasing pace.  The pace of declines will slow in the coming weeks as we are halfway through the summer driving season. 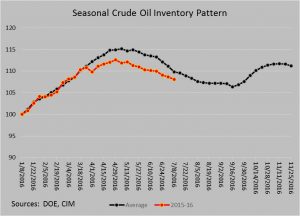 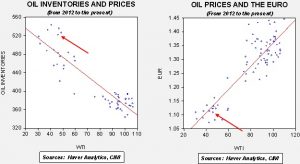 Based on inventories alone, oil prices are profoundly overvalued at a fair value price of $34.98.  Meanwhile, the EUR/WTI model generates a fair value of $47.07.  Together (which is a more sound methodology), fair value is $40.80, meaning that current prices are a bit rich.

Perhaps the bigger worry is product supplies.  Gasoline inventories are also quite elevated and, with the end of the summer driving season in sight, it appears we will head toward Labor Day with a significant overhang of stockpiles unless refineries cut production, which will dampen crude demand. 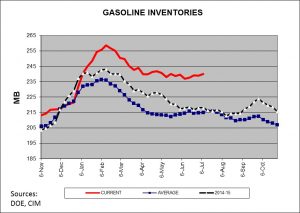 This chart shows the current level of gasoline inventories along with last year’s levels and the five-year average.  Current stocks are 25.3 mb above average for this time of year.  This high level of gasoline stocks is occurring despite robust consumption levels. 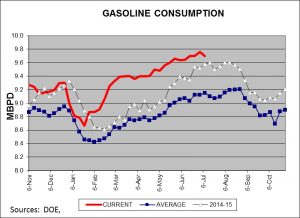 This chart shows weekly gasoline consumption on a rolling four-week average for the current year, last year and the five-year average.  The chart clearly shows that consumption is outpacing last year and the average.  However, the chart also shows that we only have about another month of elevated demand before the autumn slowdown begins.  Although we are not wildly bearish oil at this time, a pullback into the low $40s would not be a major surprise.

Finally, the lead story in today’s FT reports that the Obama administration is lodging a formal complaint against China at the WTO over China’s export restrictions on key metals, such as copper and cobalt.  These restrictions create an artificially low price market for these raw materials and give companies that use these metals an advantage in global trade.  We suspect this action is being taken to placate an electorate becoming increasingly jaded with globalization.