Happy Friday!  We’re almost to the weekend, but before we get there, we still have some important developments to keep track of.  We’re seeing some potentially positive developments in the trade row between Japan and South Korea, but on the other hand, we’re also noting some negative news in the tensions between Turkey and the United States.  We continue to watch monetary policy developments closely.  Here are the top stories we’re watching at the moment:

Japan-South Korea:  Working-level export control officials from Japan and South Korea met today to discuss Japan’s new restrictions on high technology chemicals shipped to South Korea.  The talks lasted longer than expected, which may point to some progress on the issue.  However, public statements on both sides suggest there’s a high hurdle for resolving the conflict.  Japan claims some of the chemicals ultimately end up in North Korean military equipment, but South Korea claims the restrictions are really to punish the country for its complaints about Japanese behavior during World War II.  One potential positive from the conflict is that the restrictions may be impeding South Korean chipmakers enough to whittle down the global oversupply of memory chips.

Turkey:  The Ministry of Defense announced today that it has started taking delivery of equipment related to its purchase of Russia’s S-400 air defense system.  The move is likely to further exacerbate tensions with the United States, probably guaranteeing that the Trump administration will prohibit any further sales of the F-35 jet fighter to Turkey and possibly spurring Congress to impose sanctions.

U.S. Monetary Policy:  Even as Federal Reserve Chairman Powell was wrapping up his dovish testimony before Congress yesterday, speeches by several other Fed officials were highlighting the disagreements among policymakers regarding the need for interest-rate cuts.  For example, Fed governor Lael Brainard pointed to growing economic risks and low inflation as a reason for “softening the expected path of monetary policy.”  New York Fed President John Williams echoed the sentiment.  In contrast, Atlanta Fed President Raphael Bostic said he sees no urgency to lower rates, and Richmond Fed President Thomas Barkin said soft inflation alone is not a reason to cut rates.  Although a rate cut at the end of the month still seems likely, those sentiments suggest there is still some possibility that the policymakers could hold rates steady.

Mexican Monetary Policy:  Fed Chairman Powell’s dovishness is in line with the increasing dovishness among many other major central banks.  However given the continued integration of the North American economy, it can be instructive to also pay close attention to developments in Canada and Mexico.  This week, for example, Banco de Mexico issued the minutes of its June 27 policy meeting, at which it held its benchmark rate steady at 8.25%.  In the minutes, the policymakers focused on many of the same issues playing into Chairman Powell’s dovishness.  The policymakers saw a risk that the Mexican economy would show increasing signs of deceleration, with “little clarity and visibility” into the future of economic policies going forward.

Cryptocurrencies:  Echoing Fed Chairman Powell’s criticism of Faceboook’s (FB, 201.23) proposed cryptocurrency, Libra, during his testimony before Congress, President Trump last night issued a series of tweets slamming Libra as “not money” and suggesting any company trying to issue such a currency should be subject to banking regulations.  In yet another attack on the cryptocurrency space, an official at Frances Finance Ministry said his country would “not allow private enterprises to give themselves the attributes of state sovereignty.”  With officials around the world piling on to protect their monopoly over money creation, the futures market currently suggests Facebook is set for a down day, even as the broader market seems set to rise.  All the same, some cryptocurrency advocates see a silver lining in the row, arguing that the pushback by officials is a sign of the industry’s growing importance.

Mankiw Rule update: The Taylor Rule is designed to calculate the neutral policy rate given core inflation and the measure of slack in the economy.  John Taylor measured slack using the difference between actual GDP and potential GDP.  The Taylor Rule assumes that the Fed should have an inflation target in its policy and should try to generate enough economic activity to maintain an economy near full utilization.  The rule will generate an estimate of the neutral policy rate; in theory, if the current fed funds target is below the calculated rate, then the central bank should raise rates.  Greg Mankiw, a former chair of the Council of Economic Advisors in the Bush White House and current Harvard professor, developed a similar measure that substitutes the unemployment rate for the difficult-to-observe potential GDP measure.

We have taken the original Mankiw rule and created three other variations.  Specifically, our model uses core CPI and either the unemployment rate, the employment/population ratio, involuntary part-time employment and yearly wage growth for non-supervisory workers.  All four compare inflation and some measure of slack.   The most recent data is shown in the chart at the top of the next page.

This month, the estimated target rates all rose.  Three of the models, the ones using the unemployment rate, wages and involuntary part-time employment all rose 20 bps to 30 bps.  Even the most dovish, the variation using the employment/population ratio, rose by 12 bps.  The combination of higher core CPI and better employment data lifted the rate model.  The leadership of the Fed has been backing away from the Phillips Curve model, thus we don’t expect the rise to slow the pace of expected hikes.  However, there are still members of the FOMC that ascribe to the Phillips Curve and as a result we could see dissents emerge to a rapid drop in rates, barring a decline in inflation or data suggesting a weaker employment situation. 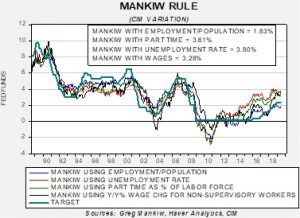