[Posted: 9:30 AM EDT] The most important news for investors is that, despite everything, equity markets around the world are gaining strength.  This improvement is coming despite slowing earnings growth, sluggish economic activity, Brexit, an adverse ruling against China on its maritime claims, U.S. elections, etc.  Why the strength?  Most likely the same reason that has lifted equities all along—supportive monetary policy. 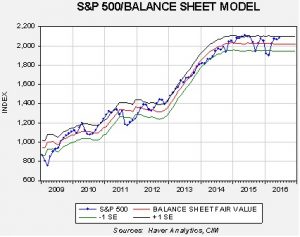 On the other hand, the combination of Brexit and unstable employment data has removed almost any chance of FOMC tightening.  We do expect some brave talk about “September being on the table” and the like, but the financial markets don’t believe it for a minute.  With the potential for turmoil this autumn tied to the U.S. elections, we doubt the Fed will have any desire to inject itself into that debate.  At the same time, it looks like Abenomics 2.0 is about to be unleashed; this version will be more fiscal in nature but will rely on the BOJ to fund the expansion.  The ECB should remain accommodative and the BOE is expected to cut rates tomorrow.  In addition, the PBOC is supporting the Chinese economy, too.  Overall, the central banks appear to be in accommodation mode, which is bullish for risk assets across the board.  In the U.S., two major fears for equities have been eliminated as uncertainty eases around Brexit due to Theresa May’s win and the Fed remains on the sidelines due to uncertainty surrounding employment.

All this points to the potential of a “melt up.”  With low bond yields and zero to negative rates on cash, equities remain attractive, at least on a relative basis. 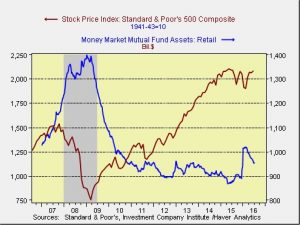 This chart shows the level of retail money market funds held along with the S&P 500.  In general, since 2011, the base level of money market funds held runs between $900 to $950 bn.  During market pullbacks, cash accumulates (the direction of causality cannot be determined—in other words, does raising cash weaken stocks or do weaker stocks lead to higher cash levels as investors sell?); as cash is redeployed, equities recover.  Current cash levels are above the upper end of the recent range, suggesting that there is ample liquidity available to propel equities higher in the short run.

The longer term danger of a stronger stock market is that it’s doubtful it can be supported by robust earnings growth.  As this week’s AAW discusses below, even the veracity of earnings is in question due to the divergence between Thomson-Reuters and Standard & Poor’s earnings numbers.  If earnings don’t keep up, the rally will come from multiple expansion.  Low interest rates support multiple expansion but it also means that equities could become “priced to perfection.”  Thus, we are in rally mode now but we are worried it will be difficult to sustain over time.