Today’s Comment begins with a recap of the minutes from the FOMC meeting in June. Next, we discuss the latest events in Ukraine and other situations related to the war. Afterward, we review various stories from around the world, including developments in the European Energy Crisis, China’s new stimulus, and the possibility of inflation cooling in the U.S.

Fed Meeting Minutes: The Federal Reserve reaffirmed its commitment to fighting inflation in its June meeting. The minutes from the meeting revealed that FOMC members were concerned that the central bank was at risk of losing its credibility. As a result, the members decided that a 50 or 75 bps rate hike would be appropriate for their July meeting. The market had little reaction to the minutes, as recent economic data did not convince investors that the minutes represented the Fed’s current thoughts on the economy. Thus, equities closed slightly higher than open, and the two and 10-year Treasury remained inverted.

Russia-Ukraine: For the first time in 133 days, Russia has not reported any territorial gains in Ukraine. The lack of progress suggests that Moscow may be implementing a pause in its invasion. Although Russian forces are still conducting limited military offensives in Ukraine, it appears that the Kremlin is preparing for more expansive operations in the future. This assessment is supported by the Russian government adopting a new law that will give it direct control over its economy. The measure allows government officials to recall workers from vacation, reschedule their time off without consent, and force them to work weekends, holidays, and nights. This change in law will allow the government to allocate more of the country’s resources toward its war effort as it seeks to take over the entirety of Ukraine. This development provides evidence that this war will probably not end soon.

Shake-up in Europe: As the war looks to ramp up pressure on Russia, Europe is also dealing with political headaches.

Inflation cooling: As the economy shows signs of slowing, there is evidence that prices may be cooling. The latest data from Zumper suggest that rental prices are starting to slow. Meanwhile, the chipmakers are reporting quicker delivery times of semiconductors suggesting that the shortage of chips may be waning. Lastly, energy prices, one of the largest contributors to inflation, have started to decline. Brent Crude has dipped below $100 a barrel for the first time since April and declining demand could see it fall further later this year. These developments indicate that inflation may have already peaked. 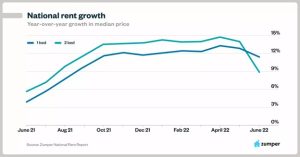 China: Although economists forecast that the Chinese government will report that its economy grew 1.5% in the second quarter, other data sources suggest that the economy shrank. The slowdown in the economy is forcing Beijing to take action to ensure that it meets its target of 5.5% growth by the end of the year. To meet its goal, China is exploring a rare mid-year sale of bonds to help fund a $220 billion stimulus package. The funds will be used to boost infrastructure and stimulate the economy.