Our Comment today opens with an update on the Russia-Ukraine war, where Russian forces seem to be on their way toward fully seizing Ukraine’s eastern Donbas region.  We next review other international and U.S. developments with the potential to affect the financial markets today with a focus on the disrupted supply of labor and industrial inputs that is keeping inflation so high.  Our discussion explains why those supply disruptions are likely to linger and prevent inflation from falling all the way back to pre-pandemic levels.

Russia-Ukraine:  Russian forces over the weekend took control of the key city of Lysychansk and the overall province of Luhansk in eastern Ukraine’s Donbas region, while maintaining defensive positions in the areas they hold in southern Ukraine.  Following the seizure of Luhansk province, Russian President Putin appeared to order an operational pause so that the involved units can rest and refit, although the Russian military will likely be wary of taking the pressure off Ukrainian forces.  Meanwhile, influential Russian military bloggers criticized the seizure of Luhansk as too little gain for the manpower and equipment lost in the battle, probably to increase pressure on the Kremlin to call for a fuller military mobilization.  At the same time, the Ukrainian military is increasingly employing Western-provided precision artillery and missiles to destroy Russian military supply resources. 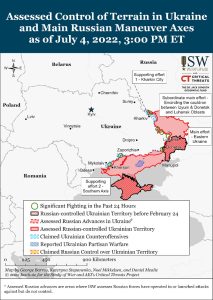 Global Semiconductor Market:  The recent rout in cryptocurrencies and a slowdown in personal computer sales have combined to put a damper on semiconductor demand, easing the shortages that have caused problems for industries ranging from autos to home appliances.  As evidence of the change, Intel (INTC, 36.34) recently initiated a hiring freeze in its PC-chip division.  If semiconductor supply and demand now come into balance, it could help ease inflation pressures and eventually prompt the Federal Reserve to cool its interest-rate hikes.

Global Labor Market:  We continue to note increasing labor unrest across the globe.  In a new example, union workers at Norwegian oil and natural gas producer Equinor (EQNR, 33.83) went on strike last night in a bid for higher wages to compensate for raging consumer price inflation, forcing the firm to shut down three oil and gas fields.  The union is threatening even stronger measures in the coming days, which the Norwegian Oil and Gas Association warns could cut Norway’s gas exports by 13%.  Since Norway is now Europe’s second-biggest supplier of gas and has become a go-to source to replace supplies from Russia, the move has helped push European gas prices up some 8% so far today.

Cryptocurrencies-China:  The slump in cryptocurrencies has also led to well-publicized problems for crypto lenders, brokerages, and hedge funds, but now we are also seeing more reports of corporate investors facing problems.  The latest example is the Chinese selfie app owner Meitu (1357.HK, 0.93), which has said its first-half loss may more than double because of bad bets that it recently made on cryptocurrencies.

Eurozone:  The strikes, the war, and other economic challenges continue to weigh on the euro, driving the currency down as much as 1.4% so far this morning, to a 20-year low of $1.0279.  With the Eurozone expected to face continued headwinds even as the ECB continues to tighten monetary policy slowly, it increasingly looks like the currency will soon reach parity with the dollar (a value of $1.00). 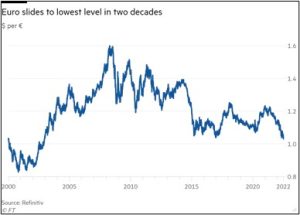 Spain-Morocco:  In an incident little noticed amid the Russia-Ukraine war and major Western summits last week, some 2,000 migrants tried to storm Spain’s enclave of Melilla on Morocco’s northern coast in late June, resulting in 23 deaths.  Spanish Prime Minister Sánchez said the deaths were necessary to defend “the national sovereignty and the territorial integrity of Spain,” but he has been taking intense criticism at home and abroad for the tough response.

United States-China:  Reports over the weekend said President Biden this week plans to lift tariffs on some Chinese consumer goods, such as clothing and school supplies, to help bring down inflation.  He reportedly also plans to announce a new framework allowing importers to request tariff waivers.