Good morning. We have a lot to discuss today. Today’s Comment will begin with an overview of the latest Fed meeting. Next, we will analyze the latest development in the Russia-Ukraine war and explain why we think the conflict could end in 2023. Afterward, the report examines the latest international news, including rising tensions on the Korean peninsula. We conclude the report by discussing the latest domestic developments.

FOMC: Stocks rallied and Treasury yields plunged on Wednesday after the Federal Reserve raised its benchmark rates by 75bps to 2.25% and 2.50%, in line with market expectations. Although the central bank statement maintained that further increases in its policy rate would likely continue, the market’s reaction suggests that investors believe that the tightening cycle could end soon. During the press conference, Fed Chair Jerome Powell stated that the Fed aims to lift rates into a moderately restrictive territory and described the current level as being neutral. Powell reiterated that another 75 bps might be appropriate for the September meeting.

Russia-Ukraine: Russia is slashing natural gas deliveries, Ukraine forces are slowing Russian advances with U.S. weapons, and grain exports are set to leave Ukrainian ports. These developments suggest that the war will persist. However, we do see a path for potential de-escalation.

Despite grain exports offering some price relief, commodities will perform well if Russia and Europe continue to play chicken with natural gas. Much has been made of Europe’s dependence on Russian gas, and it is therefore easy to ignore Russia’s limitations. For example, suppose Europe can make it through the winter. In that case, the Russian economy will feel the force of the sanctions, pressuring the government to reallocate its funds away from the war effort and toward bolstering the domestic economy. Remember, Russian President Vladimir Putin plans to run for an unprecedented third term in 2024. The fusion of rising inflation, a slowing economy, and burdensome sanctions is likely to cloud his election push. As a result, we expect there to be a possibility for Russia to pause its invasion in 2023 to regroup and possibly try again in the future. 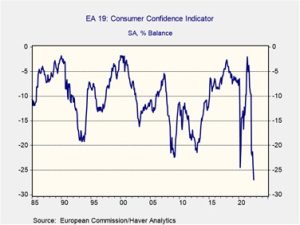 Domestic Developments: The U.S. is poised to pass new legislation that should provide some stimulus to the economy. Meanwhile, today’s phone call between President Biden and President Xi has the potential to be mutually beneficial for both the U.S. and China.

President Xi and President Biden will talk on Thursday. The focus of the discussion will be Speaker of the House Nancy Pelosi’s planned trip to Taiwan, China’s role in the Ukraine war, and possible plans for the U.S. to drop tariffs. A conversation between the world leaders will likely help the sides moderate tensions. Beijing is reeling over the news that Pelosi plans to visit Taiwan in August. Meanwhile, the U.S. does not like that China continues to elicit support for Russia. In light of rising tensions between the two countries, both seem to be in a position to make concessions. Beijing wants U.S. businesses to invest in China to generate growth before the 20th National Congress of the Communist Party. Meanwhile, Washington is pushing China to support a price cap on Russian oil. Although we expect no significant breakthroughs in this phone call, we believe that discussions could pave the way for smoother relations.