Our Comment today opens with an update on the Russia-Ukraine war, with a focus on its associated disruptions to global natural gas and grain supplies.  We next review a wide range of other international and U.S. developments with the potential to affect the financial markets today, including a preview of the Federal Reserve’s latest monetary policy meeting.

Global Economy: Today, the International Monetary Fund sharply cut its forecasts for global economic growth and raised its expectations for world price inflation.  Because of Russia’s invasion of Ukraine, supply disruptions caused by the coronavirus pandemic, and rapidly tightening financial conditions, the IMF now expects global gross domestic product to grow just 3.2% in 2022, which is down 0.4% from its April forecast.  It sees growth of just 2.9% in 2023, down 0.7% from its previous outlook.  The figures are consistent with our view that growing headwinds are combining to significantly slow global economic activity and will likely weigh on global stocks in the near term.

Germany: The IFO Economic Institute said its July business sentiment indicator dropped sharply to 88.6 from 92.2 in June, reflecting German businesses’ worsening outlook for the coming months.  The figure provides more evidence that falling global growth, the evolving European energy crisis, and other fallout from the Russia-Ukraine war are pushing Germany and the rest of Europe to the brink of recession. 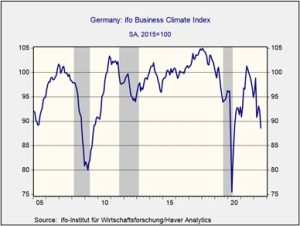 Pakistan: In an interview with the Financial Times, Pakistan Central Bank Governor Murtaza Syed played down financial market concerns about the country’s worsening liquidity crunch.  Even as Pakistan contends with rising commodity prices, falling foreign exchange reserves, and a depreciating currency, Syed said he expected the IMF to sign off on $1.3 billion of new loans for the country in August, to be supplemented by funds from China, Saudi Arabia, and other Middle Eastern countries.

United States-China: An investigation by Senate Republicans found that, over the last decade,  China has tried to build a network of informants within the Federal Reserve system to provide it with nonpublic intelligence on U.S. economic performance and monetary policy.  The efforts included both threats to Fed officials and offers of monetary compensation for information.

U.S. Monetary Policy: The Fed begins its latest two-day monetary policy meeting today, with its rate hike decision expected to be announced on Wednesday afternoon.  The officials have signaled they will hike their benchmark fed funds interest rate by another 0.75% to a range of 2.25% to 2.50%, and investors widely expect further aggressive rate hikes through the end of the year before the officials reverse course sometime in 2023.

U.S. Corporate Earnings: After market close yesterday, Walmart (WMT, $132.02) warned that rising food and fuel costs are forcing the company’s customers to cut back on purchases of higher-margin products, even as the firm struggles with an earlier announced excess of inventory.  As a result, the company said it now expects its operating profit to fall between 10% and 12% this fiscal year.  The news is weighing heavily on the stock of Walmart and other major consumer businesses so far today.