Our Comment today opens with an update on the Russia-Ukraine war, where all signs point to Ukraine launching a significant counteroffensive in its southern region around the occupied city of Kherson.  We next review a wide range of other international and U.S. developments with the potential to affect the financial markets today, many of which involve increased Western pushback against China.

Russia-Ukraine: Officials in Kyiv continue to hint more openly that Ukrainian forces have either opened up a counteroffensive against Russian occupiers in the southern Kherson region or are setting conditions to do so.  Meanwhile, nationalist influencers on Russian social media are increasingly expressing alarm over the way Russian troop advances have been brought to a standstill by the advanced weapons Ukraine has recently received from the West.  The analyses echo U.S. Defense Department assessments that HIMARS mobile rocket systems have been particularly effective in disrupting Russia’s massed artillery attacks by forcing Russian troops to adopt mitigation tactics like camouflage and frequent relocation of their batteries.  At the same time, the Russians continue to attack cities across Ukraine with artillery and long-range missiles, including a Saturday attack on Odessa’s port facilities that appeared to violate their agreement to stop hindering Ukraine’s seaborne grain exports. 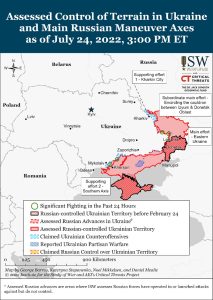 Brazil: Yesterday, President Bolsonaro launched his re-election bid with a colorful campaign rally aimed at burnishing his conservative credentials.  To further bolster his chances, he also recently convinced Congress to pass a 50% hike in cash handouts to Brazil’s poorest citizens.  Nevertheless, polls show his support continues to trail that of left-wing Former President Lula da Silva by 10% to 15%.

Argentina: Confidence in the Argentine government and its currency is (again) evaporating, with consumers rushing to convert their pesos to dollars despite an official limit of buying $200 per month.  The black-market exchange rate has now risen to 337 pesos per dollar, up 15% just in the last week. 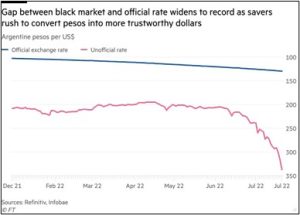 China: The State Council has reportedly passed a plan to establish a real estate fund worth up to $44.4 billion to support at least a dozen property groups whose operations have been stalled by government demands that they curb their debt.

United Kingdom-China: In the race to succeed Boris Johnson as Conservative Party leader and prime minister, Former Chancellor Rishi Sunak called for a number of measures to cut China’s influence in Britain, including shutting down dozens of its “Confucius Institutes” that promote Chinese culture in the country and using national security laws to protect British technology start-ups from Chinese investment.  Foreign Secretary Liz Truss, his rival in the race, countered that she has always been tougher on China than Sunak has.

United States-Taiwan-China: The Chinese government has reportedly issued unusually stark private warnings to the Biden administration about Speaker of the House Pelosi’s upcoming trip to Taiwan.  The Chinese warnings, which reportedly included threats of military force, have been much stronger than the threats Beijing has made in the past when it was mad about U.S. actions or policy on Taiwan.

United States-China: As the U.S. continues threatening to delist Chinese companies over their failure to share audit information, Beijing is reportedly preparing a system to sort its U.S.-listed firms into groups based on the sensitivity of the data they hold.  Beijing could then allow firms with less sensitive data to meet the U.S. audit information demands; firms with more sensitive data could potentially be restructured to allow more data sharing.  Coupled with an earlier concession that eased Chinese data-sharing rules, the new idea is designed to forestall any further rupture in U.S.-China capital flows, but there is little indication that U.S. regulators are willing to play ball.

U.S. Monetary Policy: The Federal Reserve will hold its latest two-day monetary policy meeting this week, with the decision expected to be announced on Wednesday afternoon.  The officials have signaled they will hike their benchmark fed funds interest rate by another 0.75% to a range of 2.25% to 2.50%, and investors widely expect further aggressive rate increases through the end of the year before the officials reverse course sometime in 2023.

U.S. Weather: As the country continues to deal with an extensive, long-lasting heat wave, there is an increasing concern about its negative effects on U.S. agriculture operations.  Continuing high heat and drought not only threaten to push down crop yields, but they also raise feed and other operational costs for ranchers.

U.S. COVID-19 Treatments: Even though Paxlovid, made by Pfizer (PFE, $51.23), has quickly become the most popular drug for treating COVID-19, health data analytics group Airfinity has warned that lower-than-expected patient uptake could dent sales over the coming months and result in a surplus of 70 million doses by the end of the year.  COVID-19 is still big business, but the estimates show that waning concern over the disease and broadening immunity are starting to take the wind out of it.