Our Comment today opens with an update on the Russia-Ukraine war, including further evidence that Russia’s aggression has sparked a major, long-lasting increase in global defense spending.  We next review a wide range of other international and U.S. developments with the potential to affect the financial markets today, including a swing in investor expectations toward a view that the European Central Bank will hike its benchmark interest rate this week by more than previously anticipated.

Russia-Ukraine:  Both Russian and Ukrainian forces appear to be ramping up their ground attacks, or preparing to do so, after their partial operational pauses of the last several weeks.  Russian forces also continue to launch missile strikes across the country, while Ukrainian forces are reportedly concentrating and converging for what may be a counteroffensive near the southern city of Kherson.  Reports also indicate that the Russian government has been forming volunteer units comprised of non-ethnic Russians, demonstrating President Putin’s political reluctance to order a mass mobilization of ethnic Russians.

European Union:  Based on new comments from ECB President Lagarde and other monetary policymakers in the Eurozone, investors have become increasingly convinced that the officials will hike their benchmark short-term interest rates on Thursday by an aggressive 50 bps, to 0.0%, rather than the 25 bps Lagarde insisted on earlier in the summer.  In recent days, speculation that the ECB could end negative interest rates in the Eurozone has helped drive the euro higher after it essentially reached parity with the dollar last week. 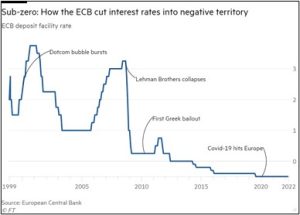 Chinese Real Estate Sector:  With dozens of real estate developers on the verge of bankruptcy and unable to finish paid-for housing units due to government efforts to rein in their debt, Beijing is scrambling to quell a move by furious homebuyers to stop making mortgage payments on undelivered homes.  One government tactic has been to censor social-media posts about the crisis.  More importantly, the China Banking and Insurance Regulatory Commission has instructed banks to provide credit to eligible property developers “based on market principles and in compliance with the law” to help them complete unfinished homes.

Chinese Technology Sector:  The Cyberspace Administration of China is reportedly preparing to impose a fine of more than $1 billion on ride-hailing company Didi Global (DIDIY, $2.93) for data security breaches discovered last year. However, the government will also ease a ban on Didi’s adding of new users to its platform and will allow the company’s mobile apps to be restored to domestic app stores.  Although China’s tech sector remains under high regulatory risk, the move is another example of Chinese authorities easing up on firms to bolster growth ahead of the party congress.

United States-China:  If you’re looking for a silver lining in today’s high U.S. inflation rate, you can find one in the comparison of U.S. to China gross domestic product (GDP).  Such comparisons are typically calculated in nominal terms at current exchange rates, so galloping U.S. prices and a weak renminbi mean China GDP will likely lag U.S. GDP for years to come.  However, when adjusted for the purchasing power of the currency, China’s GDP surpassed that of the U.S. many years ago.

United States-European Union:  Tomorrow, Secretary of State Blinken will hold a meeting with officials from the EU and 17 other countries to discuss ways to strengthen industrial supply chains among themselves.  Besides the EU, the key countries involved will include Australia, India, Indonesia, Japan, Singapore, and South Korea.  Consistent with the administration’s push to increase “friend shoring,” neither China nor Russia was invited.

U.S. Corporate Earnings:  U.S. multinational firms like Johnson & Johnson (JNJ, $174.23) have begun to indicate that the strong dollar is weighing on their profits.  Along with higher costs for materials and labor, the super-strong dollar suggests that large companies’ margins and earnings may be set to surprise to the downside through the rest of the year.