Our Comment today opens with an update on the Russia-Ukraine war, where Russia appears to be ramping up its ground attacks and missile barrages again after a partial operational pause.  We next review a wide range of other international and U.S. developments with the potential to affect the financial markets today, including the latest on the U.K.’s Conservative Party leadership election and signs of thawing China-Australia relations.

Russia-Ukraine:  Russian forces appear to be ramping up their ground attacks in Ukraine’s eastern province of Donetsk again, following a partial operational pause in recent weeks.  However, we suspect that troop and equipment shortages will prevent them from launching major new offensives.  Indeed, Moscow did not claim any new seizures of territory yesterday.  Meanwhile, Russian forces have not only stepped up their missile attacks across Ukraine, but several reports say they have moved additional troops and equipment into the Kherson region to defend it from a planned counteroffensive that Kyiv has signaled.  Importantly, those troop and equipment moves could weaken Russia’s attacks around Donetsk, perhaps as Kyiv intended when it publicized its counteroffensive against Kherson.  Finally, we note that Russian Defense Minister Shoigu has ordered Russian troops to prioritize attacks on long-range artillery systems provided to Ukraine by its Western supporters.  The order underlines the importance those systems have had in bolstering Ukraine’s military capabilities. 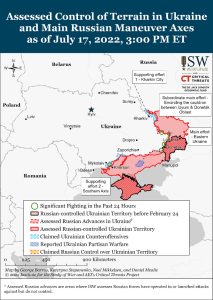 European Union:  Most of Western Europe this week is suffering through a record-breaking heatwave and wildfire outbreak, which is already starting to threaten economic activity.  What’s less publicized is that the Continent is also suffering through a major drought.  One consequence of the dry weather is that hydroelectric power generation is falling, worsening Europe’s wartime energy shortages.

China:  As the highly transmissible BA.5 Omicron mutation of the coronavirus continues to spread, a Japanese investment bank estimates that 41 cities in China are now under full or partial lockdowns or district-based controls, covering 264 million people in regions that account for about 18.7% of the country’s economic activity.  More ominous is that major production centers including Shanghai and Tianjin have ordered mass testing in response to new cases, raising the prospect of renewed lockdowns in those cities.  The news highlights the continuing negative economic impact of President Xi’s strict Zero-COVID policies.

China-Australia:  After Chinese officials last week indicated they may resume importing coal from “down under,” Australian Treasurer Jim Chalmers said such a move would help restore ties between the two countries.  He also encouraged China to remove its restrictions on other imports from Australia, such as wine and barley.

Pakistan:  Former Prime Minister Imran Khan’s party won a critical by-election in Pakistan’s most populous province, putting him on track to force early parliamentary polls just months after he was ousted from office.  Khan’s victory is being ascribed to voter anger over high inflation and the painful belt-tightening measures current Prime Minister Sharif has imposed to restart lending under a $7-billion IMF program.  Without that program, Pakistan would be at even greater risk of defaulting on its foreign debt, as Sri Lanka recently has.

Sri Lanka:  Although President Gotabaya Rajapaksa resigned and fled into exile last week, protestors are now demanding that Acting President Ranil Wickremesinghe resign as well.  Wickremesinghe is seen as a close ally of the Rajapaksa clan that has dominated Sri Lanka’s government for decades.  The continuing political and economic turmoil bodes poorly for other emerging markets, some of which are facing challenges similar to those in Sri Lanka, including high debt service costs, rising interest rates, and a strong dollar.

United States-Saudi Arabia:  On Saturday, President Biden completed his visit to Saudi Arabia with no concrete deliverables in terms of Saudi commitments to increase oil production and bring down prices.  On its face, the outcome is a significant disappointment for Biden, especially given that he has been strongly criticized for the trip by progressives looking for stronger U.S. action on human rights and policies to combat global warming.