Today’s Comment begins with discussing the latest Supreme Court ruling and its potential ramifications. Next, we examine crypto regulations and the latest update in the Ukraine war. We conclude with a review of various stories that we expect to impact markets.

EPA decision: In a 6-3 decision, the Supreme Court ruled that the Environmental Protection Agency does not have the authority to regulate carbon emissions for power plants. In the majority opinion, Chief Justice John G. Roberts Jr. stated that although capping carbon emissions solves the problem of climate change, it was unlikely that Congress intended the agency to have the power to develop a scheme on its own. Moreover, the court’s ruling will likely affect other regulations outside of the EPA’s jurisdiction. The court’s decision possibly calls into question other federal agencies’ ability to unilaterally issue vaccine mandates, prevent evictions, and ensure net neutrality.

This ruling is the latest decision by the judiciary signaling the Supreme Court’s rightward shift. We expect that the court will look to limit the authority of federal agencies to regulate firms. This decision can have potential ramifications for various industries, particularly tech and finance. The latest ruling likely paves the way for additional challenges to regulatory oversight, which could cause uncertainty on how firms should comply with current rules. We will monitor the situation closely.

Crypto regulation: Digital assets are facing regulatory scrutiny from governments. On Thursday, EU officials agreed to a set of rules that will govern how cryptocurrencies can be used as investment vehicles. For example, stablecoins will be required to hold significant reserves in case of a sudden rush for withdrawal. U.S. Treasury Secretary Janet Yellen has also advocated that Congress implement similar measures. We suspect that government oversight of cryptocurrencies on its platforms could be bearish in the short term but have the potential for upside in the future. As regulators grow their understanding of the digital asset market and how it works, they will likely be able to weed out some of the market’s riskier elements, creating a safer, more legitimate investing environment. Until then, we suspect governments will attempt to limit the use of crypto in the financial system.

Russia-Ukraine war:  Lysychansk continues to face relentless shelling from Russian forces; it is the last city under Ukrainian control in the eastern Luhansk region. Fighting between Russian and Ukrainian troops has started around an oil refinery along the city’s edge. Reports show that the pro-Russian forces have made their way across the Siverskyi Donets river. If true, Ukraine forces will probably be forced to retreat and continue their fighting elsewhere in the country. Despite Ukraine’s recent setbacks, leaders believe it can launch a counteroffensive in August to retake the land it lost to Russia. Although it has received a plethora of military equipment from the West, it could take months before weapons are operational. In the meantime, Ukraine appears to be biding its time until it can retaliate.

Erdoğan’s warning: Turkish President Recep Tayyip Erdoğan threatened to reject Finland and Sweden’s entry into NATO if these countries don’t comply with his demand to turn over terrorists. We suspect that Erdoğan’s comment is likely posturing so that he could ask for additional concessions in the future. As a result, we do not expect Turkey to pull its support for Finland and Sweden to join the military alliance.

Israel Parliament dissolves: Lawmakers in Israel voted to dissolve the government in a widely expected decision. This vote will cause the fifth election in less than four years. Polls show that Benjamin Netanyahu’s Likud party will likely win the most seats. However, it is still unclear whether his party can overcome right-wing opposition. Hence, it is still possible that Israel will head into another stalemate in parliament, creating more uncertainty in Israel.

New Zealand-Europe trade: The EU and New Zealand agreed to a trade deal on Thursday. The agreement will remove most trade tariffs between countries and include provisions that will allow either party to impose sanctions for violating the Paris Climate Agreement. The EU’s outreach to countries in the Pacific also seems to be another attempt to isolate China by bringing Pacific countries into its orbit. As the world begins to separate into blocs, we suspect trade deals like these will become more common.

EU inflation: The latest CPI reading for the Euro Area showed that prices rose 8.6% from the prior year in June, well above the previous month’s reading of 8.0%. The rise in prices was primarily driven by increasing food and energy prices. Core CPI rose only 3.7% from the previous year, which is in line with the previous month’s reading. The surge in prices across the Euro Area increases the likelihood that the ECB could raise rates by 50 bps in September. 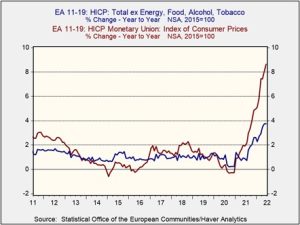