[Posted: 9:30 AM EDT] U.S. equity futures are higher again this morning as the recovery continues.  Here is what we are watching today:

Shutdown: The president went primetime last night to make his case for a wall.  The Democrats responded.  Nothing has changed and the shutdown drags on.  For the most part, financial markets have ignored the drama, which makes sense, because it really isn’t affecting the economy significantly…so far.  However, that situation may be changing.  Fitch has warned[1] that its AAA rating on U.S. Treasuries may be in danger if the shutdown collides with the debt ceiling, which officially becomes an issue on March 2 but probably won’t actually occur until early summer.  A second downgrade (S&P lowered the rating to AA in August 2011) could do serious damage to the global trading system.  We doubt there would be a wholesale retreat from the dollar on a downgrade, simply because there isn’t another alternative, but reserve managers would face pressure over time to diversify and perhaps hold more precious metals.  There are reports of rising TSA absences which are starting to affect air travel.  Landlords are being forced to use savings to avoid evictions of HUD tenants.  Disaster relief funds are being delayed.  Transportation projects are starting to be delayed.  There are reports that government workers are starting to make unemployment insurance claims that will boost initial claims (although we wonder if there are enough functioning parts of government to actually process the claims).  The SEC is delaying IPOs.[2]  And, realtors are indicating that buyers are being affected by the shutdown.[3]

The problem is that there doesn’t seem to be a workable “off-ramp” to end this impasse that doesn’t look like a loss for one side or the other.  We do look for the House to start sending a parade of spending bills to reopen various parts of the government in the coming days and there could be enough GOP defectors in the Senate to pass the bills, forcing the president to either sign them or face the optics of keeping the government from functioning.  If the financial markets start feeling the impact, we suspect the pressure to end this shutdown will escalate.

Trade talks: Chinese and U.S. trade talks ended on a positive note after being extended an additional day.  We look for another round of talks to begin next week in Washington.  Bloomberg reports something that has been whispered for weeks—the president uses the equity markets as a real-time measure of his success and wants a trade deal to lift equity values.[4]  One of the primary reasons we are optimistic on equities this year is because of the “third year effect”; history shows that the year before the election tends to be a strong year for stocks as administrations try to goose growth to improve the odds of reelection.

Brexit: PM May faced a minor defeat[5] in the House of Commons when a measure passed that prevents the government from making adjustments to tax rules if it pursues a hard Brexit.  The idea behind the bill is to impede the government from deciding to follow a hard Brexit path.  It shows that the MPs want to avoid a hard Brexit but also don’t want May’s current agreement with the EU.  As we noted yesterday, the majority seems to want to leave the EU but on terms different from what May negotiated.  However, we have serious doubts that the EU will change its position.  There is growing talk in the U.K. of an extension of the March 29 deadline, but it is unlikely the EU would agree to this unless there is a referendum or new parliamentary elections in the U.K.  Furthermore, it is highly unlikely the EU would agree to an extension simply to restart negotiations.  Complicating matters further is that EU parliamentary elections will occur sometime between May and July and members of the EU want Brexit resolved before these elections are held.[6]  Although neither side really wants a hard Brexit, odds of such an event are rising due to the inflexibility of the EU and a May government that doesn’t have enough power to push through a flawed agreement.  It is a recipe for an undesired outcome.

Chinese stimulus?  Reports indicate there has been a flurry of schedule changes by regional governments in China at the behest of Beijing.  The rescheduling will open a window for a full meeting of the Central Committee between January 19 and 22.[7]  There is no evidence other than the rescheduling that a meeting will be called or a clue as to content.  If we had to guess, the most likely outcome is an announcement of stimulus for an economy that is clearly weakening.   We could see some sort of announcement on trade as well.  But, China has a long history of not tolerating slowing growth so the most likely reason for a Central Committee meeting is to announce measures to lift the economy.

Iran facing pressure: Recently, we discussed the potential for continued waivers on Iranian oil sales.  One factor working against waivers is that Iran’s continued extraterritorial actions in Europe have eroded support for Tehran in the EU.  The EU has decided to apply sanctions on Iran for a series of assassination plots against Iranian activists living in Europe.[8]   It will be hard for Iran to draw support for busting U.S. sanctions if the EU is applying its own.  This is likely bullish for oil prices.

World Bank downgrades global growth prospects:[9] Although the decline in the forecast isn’t huge, the trend is worrisome.  The body is expecting global growth at 2.9% this year, down from 3.0% in 2018.  However, our worry is that we will see further weakness this year and the downgrade is, to some extent, confirmation of that concern.

A reflection of the recent yen rally: Last week, the JPY had a wild overnight session, appreciating strongly on no real news.  We note today that the BOJ is considering easing measures in light of the Fed pause in case the JPY appreciates.  The fact that this action is being considered should be a red flag for the Treasury Department; in general, U.S. policymakers were willing to tolerate the currency depreciation that came with Abenomics on the idea that it was part of the reform process.  However, lack of labor market reforms from Abenomics suggests the program was, in the end, nothing more than a plan for yen depreciation. 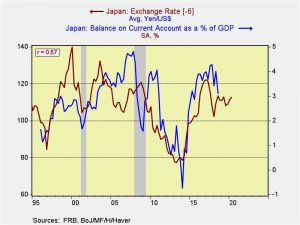