Financial and commodity markets are rather quiet this morning as we await Iran’s response.  Investor sentiment is starting to recover as risk assets are recovering.  China reported its foreign reserves.  We are watching a new pneumonia emerging from China.  As a side note, Kenny Loggins is 72 today.  Here are the details:

Iran:  Other than confusion over the U.S. troop presence in Iraq, there wasn’t much news overnight.  The U.S. is further bolstering its presence in the region, adding B-52s and more troops. We suspect this action is designed to give the U.S. tools to respond to any Iranian response.  Oil prices have started to retreat after initially rising.  As we noted yesterday, the key to a sustained rise in oil prices is the triggering of hoarding.  If that fails to occur, it is unlikely that oil prices can move significantly higher.  Global demand is modest at best and supply, including what OPEC has in excess capacity, is ample.  Obviously, all that changes if Iran does something that seriously disrupts oil flows.  Still, in the absence of any sort of attack, it will be difficult to hold prices at current levels.  However, that doesn’t mean other effects aren’t starting to show up; farmers are worried that wheat sales to the region could be affected.

China:  There were a few items of note.  First, China is grappling with an outbreak of a new respiratory illness.  So far, nearly 60 people in the city of Wuhan have been officially diagnosed with this disease.   The worry is that this event could resemble the SARS virus in 2003; medical officials in Hong Kong and Singapore have issued health alerts.  SARS had a noticeable, but short term, effect on China’s economic growth. 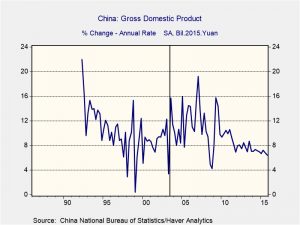 We have placed a vertical line representing the SARS outbreak. Second, foreign reserves rose in December, to $3.108 bn, up $12 bn and mostly on forecast. 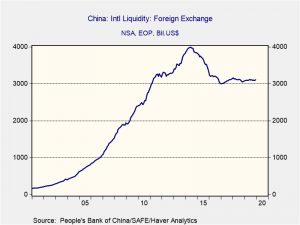 Third, China has indicated it won’t increase its grain quotas, raising questions about how the country will meet the requirements of the Phase One deal.  It is possible that the U.S. will get the bulk of the quotas and other suppliers will lose market share, but it also could mean that China has no intention to meet the terms of the upcoming agreement.

Fourth, Indonesia is standing up to the China’s incursions into South China Sea.  China considers all the waters in the “first island chain” as under its control.   Although we doubt Indonesia can withstand China’s efforts alone, with allies, the country may be able to help contain China’s behavior in the region.

Fifth, Chinese financial regulators are moving to direct household saving into the Chinese equity market.  Although Chinese investors can certainly invest now, the directive, which didn’t have any details, could be similar to a forced program to change household saving patterns.  Chinese households have tended to prefer real estate for excess saving; this program could force diversification on that saving.  It could also cool a real estate market that has been prone to overheating and support the conversion of corporate debt to equity (firms could issue stock to pay down debt).  This may be a plan to address China’s debt overhang (with the risk being born by households).  This action could be bullish for Chinese equities.

Spain:  It appears that PM Sanchez has been able to form a government with the populist left Pademos Party, making Spain one of the rare left-wing governments in Europe.  However, the coalition doesn’t have a majority and will depend on support from several small parties to govern.  We doubt this arrangement will hold for very long.

United States-North Korea:  Reports indicate the U.S. may have recently deployed MQ-9 Reaper attack drones, like the one that killed Gen. Soleimani in Iraq, to South Korea.  The U.S. forces in South Korea already have the Gray Eagle attack drone, but the addition of the Reaper is seen as a powerful additional deterrent to North Korea.

Venezuela:  A day after police barred opposition leader Juan Guaidó from entering the National Assembly and legislators voted to replace him as their leader, Vice President Pence reiterated the U.S. position that Guaidó is Venezuela’s “only legitimate” leader.  However, it is still unclear how much political support Guaido retains after his effort last year to oust President Maduro petered out.