Happy Monday!  It’s another risk off morning, as issues surrounding Iran dominate the news and the markets.  We update the situation in the Middle East this morning.  In other news, Hong Kong has a new administrator and Phase One of the U.S./China trade deal should be signed by the 15th.  Here are the details:

Iran:  The funeral of Qassem Soleimani continues in Iran to massive crowds.  In the wake of the operation that killed Soleimani, here are the items we are watching most closely: 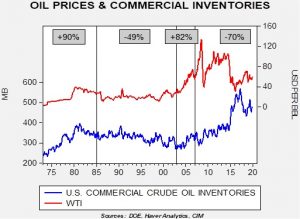 This chart shows the price of West Texas Intermediate with U.S. commercial crude oil stocks.  Under normal circumstances, inventory represents the difference between supply and demand, and so there should be an inverse correlation between stockpiles and price.  In other words, rising inventories should bring lower prices and vice versa.  However, under conditions of hoarding, some of the inventory build represents precautionary demand and the correlation can turn positive.  The chart above shows the relationship of these two variables since 1973, when OPEC became the global swing producer.  Although the majority of the time the correlation is inverse, there have been significant periods of positive correlation, especially in the 1970s into the mid-1980s.  In this period, unrest in the Middle East (two wars, the Yom Kippur War and the Iran-Iraq War, the Iran Revolution) led to constant fears of supply shortages and hoarding behavior.  We also saw a short period of positive correlation from 2003-07, on “peak oil” fears and the rapid rise of Chinese oil demand.

The West has several tools available to dampen hoarding activity.  First, the OECD nations and China have strategic reserves which, in theory, can be used to distribute supply globally to dampen hoarding.  Second, the rise of U.S. shale production has created an important supply buffer outside the Middle East, where the vast majority of OPEC’s excess oil capacity resides.  These may be enough to prevent hoarding.  However, there is potential that these two factors may fail to prevent the hoarding instinct.  First, the strategic reserves work because in a crisis, the OECD, through the IEA, would take control of national strategic reserves; in other words, the IEA could demand the U.S. sell oil to Panama from the U.S. SPR.  This program has never actually been executed, but in the current nationalist environment, we think the odds of U.S. taxpayer provided oil being sold outside the U.S. to prevent hoarding in Central America is extremely unlikely.  Second, the shale oil supply only dampens hoarding if it is available for export.  In the case of a supply emergency, the temptation to close off American oil exports will be very high.  Thus, WTI prices might stay low relative to world prices, but global prices, represented by Brent, might soar.  The potential for oil prices disrupting global economic growth is probably as high now as it was in the 1970s.  And so, the “playbook” of assuming that geopolitical events in the Middle East only have a short-term impact on oil prices, the pattern seen since 1985, may not be as operative as the parade of analysts on the financial media seem to think.

China-Hong Kong:  The Chinese government replaced its top representative in Hong Kong with Luo Huining, a former provincial leader who is expected to be tougher on the city’s continuing anti-China protests.  Even though Beijing’s many similar baby steps haven’t led to a bloody confrontation, or clampdown yet, such a move is likely to keep alive the risk of such an outcome, so it will probably be negative for Hong Kong stocks.

Trade:  It appears that Phase One of the U.S./China trade deal will be signed in Washington on January 15.  Boris Johnson wants to “fast track” a deal with the EU to get a trade deal done before 2021.[1]  France is warning the U.S. not to retaliate against its digital tax.

Venezuela:  Opposition leader Juan Guaidó, who as head of the National Assembly declared himself interim leader of the country last year, was voted out of his legislative role and replaced by opposition deputy Luis Eduardo Parra.  Ahead of the vote, police prevented Guaidó and his supporters from entering the legislative building, prompting U.S. Secretary of State Pompeo to accuse President Maduro of orchestrating the vote through an “undemocratic campaign of bribery and intimidation.”  Guaidó’s supporters then held an impromptu vote to re-elect him, but it is not clear whether he will retain the confidence of the country’s anti-Maduro forces.  We would score this as at least a short-term win for Maduro that will prolong Venezuela’s misery.

Turkey-Lebanon:  President Erdogan said Turkey has already started sending soldiers to Libya to help its UN-backed government fend off rebel attacks, in defiance of President Trump’s call last week for Turkey to stay out of the conflict.  Erdogan insisted the Turkish troops would have no direct combat role, suggesting their Syrian militia allies would lead the fighting.

India:  In a sign that Prime Minister Modi’s Hindu nationalist movement is gathering force, a mob of Hindu rightwing activists stormed India’s most prestigious secular academic institution, Jawaharlal Nehru University, and commenced beating students and faculty members they accused of being insufficiently nationalist.  It’s not clear whether the storming was sanctioned, or organized by Modi’s Hindu nationalist government, or whether it was spontaneous.  In either case, accumulating incidents like this point to a potentially destabilized social situation that could eventually be negative for Indian stocks.

Global Cocoa Market:  In devastating news for the world’s chocolate lovers, the West African countries of Ivory Coast and Ghana have agreed to form a cocoa cartel and will try to boost the price of the main ingredient of chocolate to $2,900 per ton from the current $2,500 per ton.  Together, the two countries produce almost two-thirds of the world’s cocoa, so market participants are anticipating prices will rise substantially.