[Posted: 9:30 AM EDT] After a hard sell-off in equities yesterday, we are seeing a bounce this morning.  Boosting sentiment are hopes for a dovish tone from Chair Powell, a reserve rate cut in China and the opening of formal trade talks between the U.S. and China.  We cover the employment data in detail below but the quick take is that the data came in “hot”—payrolls rose 312k, well above expectations, and wage growth was strong.  We did see a rise in the unemployment rate, mostly because the labor force rose.  Here is what we are watching this morning:

Signs the Fed needs to stop:[1]  One of the key indicators we use for monetary policy is the two-year deferred Eurodollar futures.  Essentially, it tells us what the market thinks three-month LIBOR will be in two years.  It has an uncanny knack for signaling when policymakers should target policy rates.

First, the implied rate has fallen sharply in the last few weeks. 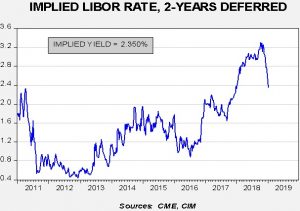 The implied LIBOR rate was 3.30% in late October.  It has dropped almost 100 bps since then to 2.35%.  As noted, this implied rate is closely tied to fed funds. 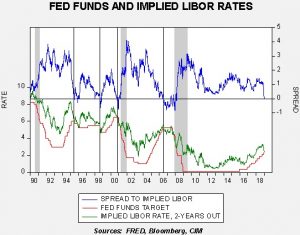 This chart shows the implied LIBOR rate along with the fed funds target on a weekly basis.  The inflection points are shown by vertical lines.  Recessions are in gray.  Note that the Fed tends to stop raising rates when the upper line falls below zero.  In fact, the Greenspan Fed tended to move rates based off this implied rate.  We have seen a significant drop in the implied LIBOR rate to the level of the current mid-point of the policy rate range.  Although the Fed may not necessarily need to lower rates, increasing rates at this point would be a serious policy mistake.  Chair Powell is participating at a closed panel interview along with former Chairs Bernanke and Yellen at the American Economic Association in Atlanta today at 10:30 EST; we will be watching to see if he suggests any thoughts of a pause.  We note that Dallas FRB President Kaplan told Bloomberg yesterday he supports a pause.  The above data suggests the FOMC should take the advice seriously.  At the same time, if Powell does lean toward further increases, he will likely cite today’s employment report.

Reserve rate cut: China cut its required reserve ratio[2] for banks by 50 bps on January 15 and an additional cut of the same magnitude will follow on January 25.  That will take the reserve ratio for large banks down to 13.5%.  Although this is good news, the action is modest at best.  First, the PBOC’s Medium-Term Lending Facility will expire later this year and the ratio cut is designed to partially offset that loss.  Second, the bank is anticipating the usual liquidity problems associated with the Chinese New Year (which is on February 5 this year; in the Chinese zodiac, it’s the year of the Pig).  Although the financial markets appear to be treating the action as policy stimulus, in reality, there isn’t a lot here; in fact, the PBOC could offset any stimulus by raising the repo rate.  However, we do expect to see rate cuts later this year to offset slowing growth.

Trade talks: The U.S. and China will begin formal trade talks on Monday.[3]  Jeffrey Gerrish, the deputy U.S. trade representative, will lead the talks.  Gerrish is closely aligned with Lighthizer, so we would expect him to hold to his boss’s hard line in negotiations.  It is generally expected that these talks will lay the groundwork for higher level negotiations next month.

The U.S. and China: Apple’s (AAPL, 142.19) warning yesterday[4] highlights a problem in the geostrategic relationship between the U.S. and China.  Both nations are now rivals, but unlike the U.S./Soviet rivalry during the Cold War the U.S. and Chinese economies are closely tied together.  CEA Chair Hassett’s comment yesterday suggesting that U.S. companies with ties to China “are going to be watching their earnings be downgraded next year until we have a deal with China” sent tremors through the equity markets.  We note the editorial boards of major papers are waking up to this problem.[5]  China’s economy is clearly coming under pressure, in part due to the trade actions by the U.S.[6]  But, the drop in the U.S. manufacturing PMI data yesterday shows that the American economy is also feeling a pinch from tightening monetary policy and issues with China.

The British faced a similar problem in the late 1800s as two rising nations, Germany and the U.S., threatened its global dominance.  The U.K. managed the U.S. by essentially ceding the Western Hemisphere to America, quietly acknowledging it would be unable to defend Canada from a U.S. invasion.  It turned its focus to Germany; sadly, that issue led to WWI.  The U.S. needs to redefine its relationship with China.  The idea that the Chinese would follow the path of Germany and Japan and align with U.S. geostrategic interests has been proven false.  However, this redefinition will likely have an adverse impact on the economies of both nations.  We also note the State Department has raised its warnings to Americans in China.[7]

Brexit: Our position has been that the May government or its successor will avoid a hard Brexit.  However, the odds of such an outcome do appear to be increasing.  One factor that appears to be driving the Tories to this outcome could best be described as “delusions of empire.”[8]  There seems to be this belief that Britain, freed from the constraints of the EU, could “get the band back together” and recreate the Commonwealth.[9]  We expected these ideas to fade as Brexit approached, but that doesn’t seem to be happening.  In fact, polls suggest that 57% of Tories would rather have a no-deal Brexit than PM May’s plan.[10]  The general consensus is that a no-deal Brexit would bring a nasty economic shock for the economy.  However, the Tories simply don’t trust that narrative.  For the rest of the population, 42% prefer to remain in the EU, 25% opted for no deal and 13% would accept May’s plan.

One potential outcome could be a split in the Conservatives between the leave and remain camp, which would lead to a position of dominance.  A Corbyn-led government would be a major negative for British financial assets.  Corbyn’s policy goals include renationalizing major industries and punitive taxes.  This isn’t our base case but the country seems unable to come to a consensus about its position, and the longer indecision reigns the greater the chance of a crisis.