Coronavirus:  Yesterday, the WHO officially declared an international emergency, but then went on to say that it shouldn’t affect travel, or border security.  Equities actually rallied on the news, but the optimism didn’t stick.  We are approaching 10k in confirmed infections and the death toll has now exceeded 200.  New cases are being reported in Europe.  Despite WHO recommendations, Singapore and Mongolia have closed their borders to anyone coming from China.  The U.S. has implemented a Level 4 travel ban to China, a simple “do not travel” warning.  Countries outside of China are trying to isolate the spread. Reports say even North Korea(!) is suspending trade with China and has stopped issuing visas to Chinese citizens.   China is extending the New Year’s holiday; reports from contacts indicate that most businesses will remain closed and are telling their employees to work from home.  Airlines are bearing the brunt of the weakness, although the turmoil in China will almost certainly affect global manufacturing supply chains.  Since mainland Chinese markets remain closed, we have been paying close attention to the Hang Seng; it closed down again today, but the pace of the decline is moderating.  Overall, we are looking at probably two to three weeks of volatility.

Eurozone:  In an initial estimate, fourth-quarter GDP grew by a seasonally-adjusted 0.1% from the previous quarter, short of the expected rise of 0.2% and much slower than the third-quarter increase of 0.3%.  GDP in the fourth quarter was up just 1.0% from the same period in 2018, and full-year GDP in 2019 was up just 1.2% from 2018 its weakest annual gain in six years.  Not only is Eurozone growth being dragged down by global trade tensions and a struggling auto industry, but the data shows fourth-quarter GDP unexpectedly contracted in both France and Italy.  The disappointing numbers are weighing on global equities today.  Since the figures suggest the ECB may have to loosen monetary policy further in the coming months, bonds are reacting positively to the news. 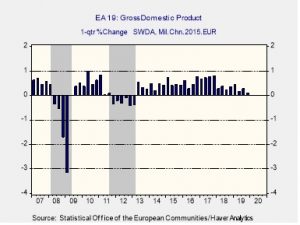 Brexit:  At 6:00 EST, the U.K. will leave the EU.  In reality, nothing changes all that much immediately.  The U.K. will remain under EU rules for the next 11 months while a trade deal is worked out.  The most immediate impact will be on the EU; the European Parliament will shift rightward as center-right parties will capture most of the exiting U.K. seats.  The EU will be more dominated by Paris and Berlin after losing British influence.  For the most part, the Brexit seems to be a bit anti-climactic after all.

BOJ:  PM Abe has appointed Seiji Adachi to the BOJ, replacing Yutaka Harada on the nine-member board.  Adachi is considered an extreme dove, but the composition of the board won’t really change because Harada was dovish too.  The current composition of the board is three reflationists and six moderates.  In June, Yukitoshi Funo’s term will end; he is a moderate; if Abe adds another reflationist, we could see a weaker JPY.

Global Tech Taxes:  The 137 countries working with the OECD to develop new, global rules for taxing multinational companies has issued a statement reaffirming their goal to reach a deal by the end of 2020.  The statement suggests the participants have had a fire lit under them by the recent dustup between the U.S. and France over France’s proposal for an interim tax on global tech firms’ digital revenues.  A new tax regime like the one being discussed could have a big impact on corporate earnings for years into the future, so we’ll be watching how things develop over the course of the year.

United States-South Korea:  The Pentagon has warned its South Korean employees they could be furloughed on April 1 because of insufficient funds to pay them.  The warning is being taken as a sign that the U.S. and South Korea are still deadlocked over a new cost-sharing deal for the 28,500 U.S. troops stationed in South Korea.