[Posted: 9:30 AM EST] Equities are back in the green this morning.  The dollar is also in retreat.  Here is what we are watching today:

The FOMC: The last FOMC meeting chaired by Janet Yellen concludes today.  We don’t expect a rate change or anything in the statement that will raise concerns.  At the same time, market action suggests we are preparing for a series of rate hikes that could become problematic at some point. 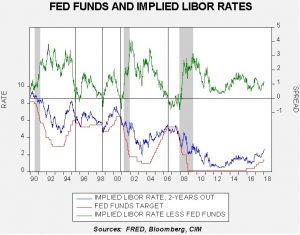 The lower lines on the chart show the fed funds target with the implied LIBOR rate from the two-year deferred Eurodollar futures market.  The latter is projecting the three-month LIBOR rate two years from now.  The futures tend to anticipate tightening policy actions.  Recently, we have seen the implied rate rise rather strongly; that rate, at 2.665%, is the highest in seven years.  Last September, the implied rate was 1.65%, meaning that we have seen the implied rate jump 100 bps.  The rise signals to the FOMC that higher rates are now being discounted and tells policymakers it’s safe to raise rates.  The current implied LIBOR rate has discounted fed funds at 2.40%, meaning that we will almost certainly see higher rates this year.  Thus, this meeting won’t be a big deal, but a four-hike year is being discounted by the fixed income markets.

The NY FRB moves forward: The NY Federal Reserve is moving forward to replace Bill Dudley, who is expected to step down in June.  The president of the NY FRB is especially important because he votes at every meeting, just like a governor.  Once the board of directors of the NY FRB selects its nominee, final approval from the Fed’s board of governors is required for this position.

The BOJ fights back: BOJ Governor Kuroda moved to scotch reports that the Japanese central bank is beginning to withdraw stimulus by boosting bond buying.  The JPY has been strengthening recently but it did weaken this morning on these comments.  We will be watching closely to see if the market believes Kuroda or thinks that stimulus is coming to a close. If the JPY resumes its appreciation, it suggests Kuroda hasn’t convinced traders.

Cha is out: Victor Cha, an academic who served in the George W. Bush administration, was the White House’s first choice for Ambassador to South Korea.  However, Cha recently said that the idea of limited military action against North Korea (the “bloody nose” strategy) would be a mistake and could lead to a wider war.  This action against Cha suggests the administration may be leaning toward limited military strikes.  Although such strikes may work (previous examples would be the bombing of Libya by Reagan and various missile strikes in the 1990s), they tend to work best when the adversary doesn’t have the means to retaliate.  North Korea could easily misinterpret limited strikes as preparation for invasion and deploy its nuclear weapons.  The administration may simply want an ambassador that is at least open to the idea of military action even if it isn’t going to occur, but it could also mean the president is leaning toward a military engagement.  By the way, it appears there is only one carrier group in theater, the USS Carl Vinson CSG.  The USS John C. Stennis CSG could be added on short notice but, in order to conduct major operations, the U.S. military usually prefers three groups that can conduct 24/7 air operations.

Catalan surrender?  This morning Telecinco, a Spanish broadcasting network, aired a text message sent by former Catalan President Carles Puigdemont to his aide, exclaiming that the Catalan independence movement is dead and the Spanish government has won.  This comes a day after the Catalan parliament postponed holding a vote for president.[1]  In response to the report, Puigdemont stated on Twitter that he does have his doubts but he still remains supportive of the independence movement.  At this moment, it is unclear what to make of the text, but it is becoming increasingly apparent that the separatists do not have the support or leverage needed to force the Spanish government to accept Catalonia as an independent state.  That being said, we do not expect the separatists to go away completely as their supporters are very loyal.