The fifth episode of the Confluence of Ideas podcast has been posted.  “Arriving at Decisions” examines the issues that surround making decisions under conditions of uncertainty.

Happy Friday!  With the world still in New Year’s holiday mode, there’s little interesting news in most countries, but that doesn’t include Iran and Iraq.  In what’s likely to be a watershed moment for the whole Middle East, yesterday the United States assassinated one of Iran’s most important and influential military leaders as he traveled to the airport in Baghdad.  As discussed below, that’s likely to produce an ongoing risk of retaliation, escalation and miscalculation.   Here’s our take on what’s happening:

United States-Iran: Overnight, a U.S. airstrike ordered by President Trump killed Qassem Soleimani, the chief of the Iranian Revolutionary Guards’ foreign forces.  Also killed was Abu Mahdi al-Mohandes, the deputy commander of an important Iran-allied militia force in Iraq.  The action took place in Baghdad as the two were driving to the city’s airport.  Justifying the strike as defensive, the Pentagon said Soleimani was actively developing plans to attack U.S. diplomats and service members in Iraq.  Meanwhile, Al-Mohandes’ militia had been harassing U.S. forces in Iraq, including this week’s attempt to storm the U.S. Embassy in Baghdad.  With Iran already suffering mightily from the U.S. sanctions against it and its nuclear program, and with many Middle Easterners starting to push back against Iran’s interference in their countries, the blatant assassination of such an important, high-level Iranian official is certain to invite retaliation.  Supreme leader Ayatollah Ali Khamenei has already vowed “tough revenge.”  A key question for the future is what that revenge will look like:  A military strike on Saudi Arabia, or Israel?  Assassination of a CIA station chief, or U.S. military officer?  Disruptive computer hacking?  The increase in tensions and the risk of escalation, or miscalculation have already driven up oil prices and sparked heavy buying of safe-haven assets like gold and government bonds, while global equities are falling so far today.  However, it’s important to remember that any Iranian revenge attack may come with a lag.  If that happens, investors could soon be lulled into a false sense of security.  This might allow risk assets to recover and safe-haven assets to sell off again, but the reality is that Iranian mischief could come out of the blue at any moment, just like the missile that killed Soleimani and Al Mohandes.

United States-Turkey-Libya:  In a call yesterday, President Trump warned Turkish President Erdogan against sending troops to Libya to support its UN-backed government.  Official U.S. policy is to support the government, but Trump has expressed sympathy for warlord Khalifa Haftar, who is trying to overthrow it with the help of Egypt, Saudi Arabia and Russia.

United States:  Despite the euphoria in the financial markets as the New Year trading began yesterday, it’s important to remember there are not just geopolitical risks, but also some lingering economic risks to keep in mind.  For example, it’s still possible that the Fed’s interest-rate cuts last year may have come too late.  Separately, the Philadelphia Federal Reserve has issued a report noting that nine states are expected to be in recession in 2020, including Pennsylvania, New Jersey, Delaware, West Virginia, and Iowa.

Australia:  The nation’s massive wildfires are intensifying again as hot, windy conditions return.  Today the Australian navy began evacuating thousands of people stranded in tourist towns along the country’s eastern coast, and Victoria’s territorial government has declared a state of emergency.  Importantly, Prime Minister Morrison continues to take blame for heading off to Hawaii for a vacation in the midst of the crisis.  During his visit to New South Wales after his return, residents reportedly refused to shake his hand and forced him to retreat to a car amid strong heckling and swearing.  It’s too early to know exactly how much the disaster will impact Australia’s economy, or political stability but there does appear to be a significant risk to Australian assets.

Mexico:  Banco de Mexico yesterday released the minutes from its December policy meeting, with the document showing officials were concerned that a 20% hike in Mexico’s minimum wage scheduled for January 1 would increase price pressures, even though last year’s 16% hike of the minimum wage didn’t prevent a steep drop in inflation.  The policymakers did decide to cut their benchmark short-term interest rate to 7.25%, compared with 7.50% previously, but the cut was seen as timid considering the way Mexican inflation has recently been cooling. 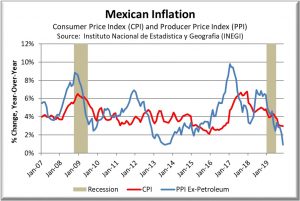