BREAKING:  Houthi rebels claim they launched a drone and missile attack on Saudi oil facilities; oil prices have rallied on the news.

It’s FOMC Day!  As we noted yesterday, we don’t expect much from the statement, but the press conference could be interesting.  Developed equity markets continue to recover.  We update on the coronavirus.  More on the U.K.  The CBO projects the deficit.  We are also monitoring some reports out of Afghanistan.  An update on Spain.  Here are the details:

The Fed:   To recap, we don’t expect any change in policy.  In fact, in the statement, we shouldn’t see any reference to balance sheet expansion, since the Fed continues to insist that it isn’t QE.  However, we could see some hard questioning on the balance sheet in the press conference.  One potentially bearish factor would be if the Chair signals that the expansion will be taken away anytime soon.  There should also be some discussion of the coronavirus and the potential impact on monetary policy.  We expect Powell to suggest that the FOMC is watching developments and will move to lower rates if the virus negatively affects growth.  Overall, this one should be a snoozer, but if a surprise is going to happen it will be in the press conference.

Coronavirus:  Hong Kong reopened today and the Hang Seng fell a bit less than 3%.  To date, nearly 6,000 cases have been confirmed and more than 130 have died.   Thus far, there have been no fatalities outside of China.  The U.S. has offered to send CDC officials to assist the Chinese government; so far, Beijing has not responded.  Countries are steadily restricting travel to China; British Airways (IAG, GBP, 5.918) has suspended flights to China.   The U.S. is considering a total ban on air traffic to China.  The U.S. and Japan have removed its nationals from Wuhan; the Americans have flown to Anchorage where they will be tested for the virus in a secure terminal.  They will eventually arrive at March Air Reserve Base in Riverside, CA.  In general, this virus appears to be more easily transmitted compared to SARS, but much less deadly.  SARS killed about 10% of those affected; this virus appears to be fatal to 2% to 3%, so far.  China has confirmed cases of foreigners infected within China.  Markets are still dealing with the potential economic impact of this virus, but there are three areas that are clearly affected—travel, tourism and movies.

U.K.:  We continue to monitor for fallout from the Johnson government’s decision to accept Huawei (002502, CNY 2.99), defying a U.S. ban.  The fear is that if the U.S. doesn’t retaliate strongly, the EU will likely follow the same path.  Germany is considering accepting equipment from the Chinese firm under threat from Beijing that it will face auto tariffs if it complies with U.S. demands.  In some respects, Europe is in a very difficult spot.  The Eurozone has essentially become a “greater Germany” in economic terms.  In other words, as Germany has become dependent on exports, so has the rest of the Eurozone.  That means other nations can affect the Eurozone economy by reducing the amount of goods they buy from the region.  At the same time, its defense capabilities are modest at best, so the EU still depends on the U.S. for security.  Europe seems to be betting that the U.S. won’t inflict costs high enough compared to the loss of future 5G.

Bolivia:  Last October, Evo Morales, the former president of the country, fled into exile in Mexico after he was denied the right to run again for office.  Jeanine Anez took over as interim president with promises to step down once elections occurred.  Apparently, she has developed a fondness of the office as she has announced her candidacy.  This decision will be controversial, as she is seen as a divisive figure.  Elections are not due until Oct. 20.

The deficit:  The Congressional Budget Office has updated its forecast for the deficit.  The numbers are large. 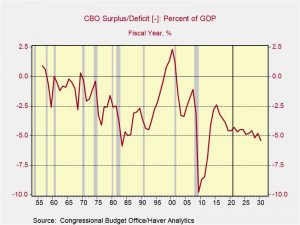 In general, deficits around 5% of the GDP are usually associated with recessions.  To have deficits at this level late in an expansion suggests the deficit will expand even further when the inevitable recession occurs.  Still, it’s important to remember that the impact of deficits is dependent upon the level of unused resources in the economy.  The fact that we can run deficits of this magnitude without serious inflation ramifications suggests that there is still ample slack in the economy.  The dollar’s strength in the face of these deficits suggests there are no concerns about capacity to service the debt.  So, for now, this situation isn’t a problem.

A situation we are monitoring:  The U.S. has confirmed that an E-11A crashed in Afghanistan on Monday.  The aircraft is used by the Air Force for communications.  The Taliban has claimed it shot the aircraft down; the U.S. has denied the claim.   According to reports, SEALS recovered two bodies and the black box and destroyed sensitive equipment.  Iranian and Russian media are reporting that the senior CIA officer that was responsible for the operation that killed Qassim Soleimani died in the crash.   The U.S. has not confirmed these rumors.  We have doubts over the veracity of these reports.  Misinformation is rather normal with these sorts of things.  However, we will continue to watch to see if there are further developments.

Troubles in Catalonia: Unity among pro-Catalan independence parties suffered a blow on Wednesday, after Catalan President Quim Torra called for new regional elections. The move is in response to the President being stripped of his voting rights after the Spanish Court and Central Electoral board found him guilty of disobeying electoral rules. In December, President Torra was found guilty of disobedience for his refusal to remove banners in support of jailed pro-independence leaders. New elections highlight the growing fractions between separatist parties, the Republican Left of Catalonia (ERC) and Junts Per Catalonia (JxCAT). Although the two sides agree on Catalan independence, the groups represent opposite sides of the political spectrum. The political storm has yet to cause uncertainty within Spain, but highlights the growing differences between the two sides.